Get the app Get the app
AOPA will be closed July 4th, in observance of the Independence Day holiday. We will reopen at 8:30 am ET on Tuesday, July 5.
News & Media Chicago fire review released 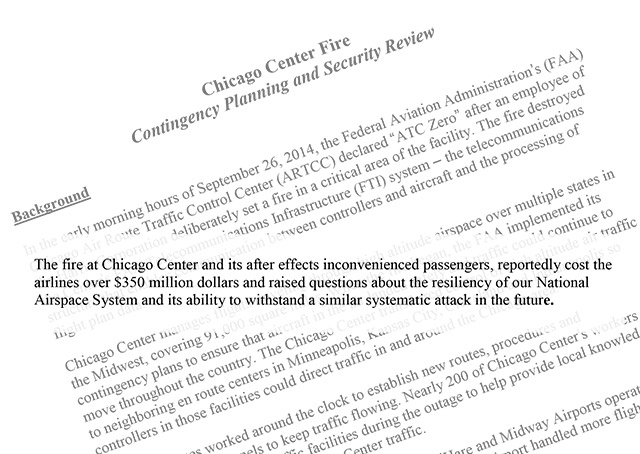 The sabotage and arson on Sept. 26 that took the Chicago Air Route Traffic Control Center offline for 18 days cost the airlines more than $350 million, and the FAA on Nov. 24 released the broad outlines of a plan to reduce the cost and disruption if anything similar happens again.

With smoke still billowing from the evacuated building, controllers assembled in the parking lot and began working their cellphones to notify their colleagues of the calamity, and soon fanned out in their cars, heading to the facilities that would take on Chicago Center’s workload for the coming weeks—a response detailed in an AOPA Online story earlier this month.

The five-page report on the FAA internal review of the response and facility security was issued in conjunction with a press release and describes a three-stage plan to make the system able to cope more quickly with future disruptions such as the loss of a key facility. The FAA noted that 10 miles of cable, dozens of racks, and hundreds of circuits had to be replaced to restore the center to full function on Oct. 13. Shifting Chicago Center functions to other facilities allowed the system to return to 90 percent capacity within days.

Within the year, the FAA plans to adapt existing systems to allow operators to reconfigure the National Airspace System within hours rather than days. By 2018, additional automation of flight plan distribution and inter-facility hand-offs, combined with giving ARTCC facilities the ability to mirror neighboring traffic sectors, will make a disaster response more efficient. “This level of improvement will further reduce the potential economic loss for airspace users,” the report states.

FAA Administrator Michael Huerta and Transportation Secretary Anthony Foxx both stated in the press release that continued funding and implementation of the NextGen air traffic control modernization is required to make the system more adaptable.

“We have a national infrastructure deficit facing our nation from which the national aviation system is not immune. The FAA needs a stable and reliable funding stream to fully implement NextGen, which will further reduce delays and service disruptions,” Foxx said.

While there is little detail in the report, it states that NextGen-related upgrades to voice and data communications, including communications between aircraft and facilities, and between facilities, will make the system more flexible and the FAA better able to rapidly recreate capabilities lost if a facility goes offline.

“NextGen capabilities will build on the enhancements planned for Stages 1 and 2, providing airspace flexibility by reducing the facility-dependent information flows,” the report states. “The FAA is examining how to best utilize NextGen capabilities to meet resiliency, contingency, and continuity needs so that services could be made available quickly if capabilities are lost.”

The FAA has also “identified potential opportunities” to upgrade building security with a combination of better access control to key facilities, and training for staff on how to spot and report potential security risks and respond to threats. “Many of these actions can be executed only if resources become available,” the report states.