Get the app Get the app
Already a member? Please login below for an enhanced experience. Not a member? Join today
News & Media Craftsmanship: Old-style restoration

Pilots find breathtaking beauty in the curve of a propeller, the shape of a wing, even the thoughtful interface of a piece of avionics. But who makes this stuff and, in some cases, keeps it beautiful for decades? Our occasional Craftsmanship series explores the people who create—and re-create—these beautiful things for us. —Tom Haines 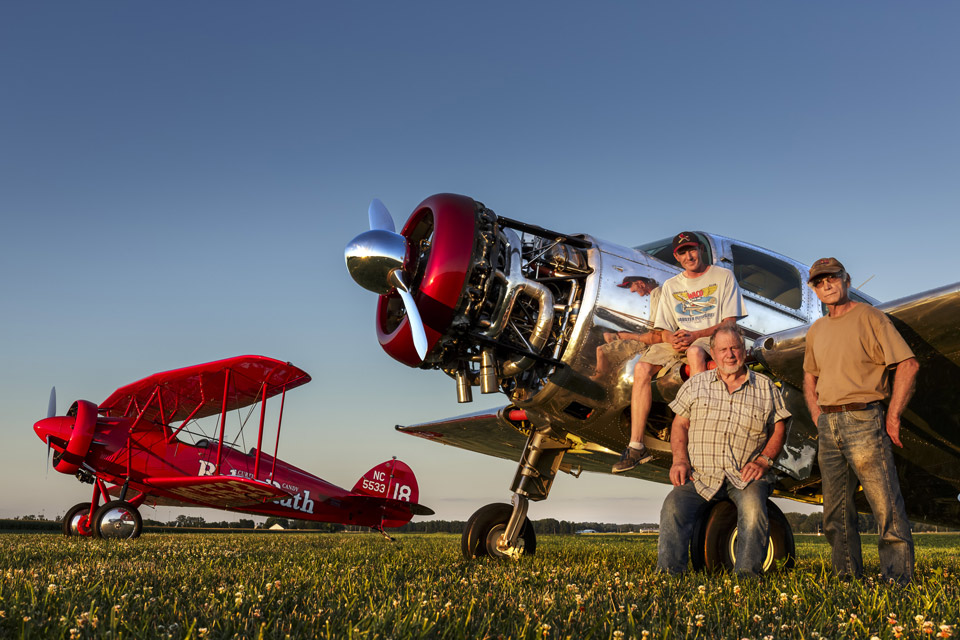 Aviation’s Golden Era isn’t dead, it’s in four hangars at Creve Coeur Airport northwest of St. Louis. Since 1951, John Cournoyer has rebuilt 100 aircraft from the past—starting with a 40-horsepower Taylorcraft he bought with an antique rifle, an antique Ford, and a $100 bill. His journey has been “a lot of work.” You can see it in his rough-worn hands.

Today he and Al Stix, owners of the airport a mile from the Missouri River, co-own many of the 55 aircraft in the Historic Aircraft Restoration Museum, most of them flyable but grounded by insurance costs. They tell the story of aviation from its teen years into adulthood—not only to Americans, but to the world through movies. Cournoyer’s Olde Style Aircraft, also on the field, is just five miles from his Old Style Body Shop—where many of the antiques arrive by truck to share the paint shop with customers’ cars. In the car shop now is a rare 1940 Waco HRE, the only one left in the world. 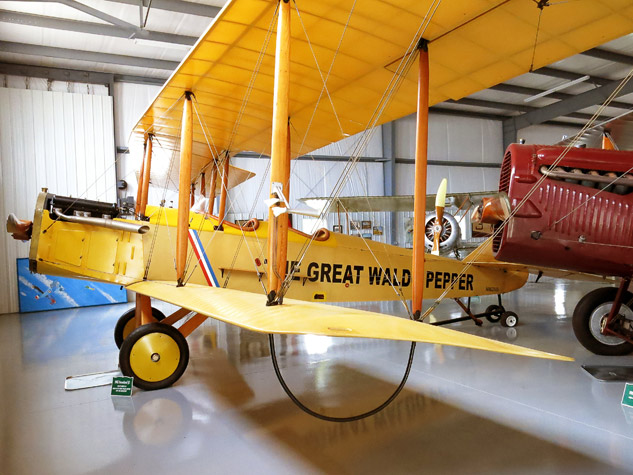 Cournoyer’s wife Connie admits to a life flooded with airplane parts—and car parts. She works at the Old Style Body Shop, where a truck with two front ends welded together attracts attention beneath the company sign. While she doesn’t want to be a pilot, she is interested in the aviation history that comes through their lives. That’s his secret to a long life. “Keep active,” the 79-year-old craftsman advises.

Meet me in St. Louie, Louie

Aircraft today don’t look as they did in the Golden Era because they didn’t fly well, says Albert Stix of the Historic Aircraft Restoration Museum. He recalled deciding to do a forward slip to lose altitude while on final approach at 600 feet in a Curtiss Jenny. He lowered the left wing and applied right rudder, allowing him to keep the aircraft lined up with the runway while using the side of the fuselage as drag to increase the descent rate. As he tried to recover from the slip, the wing lifted so slowly that he nearly landed on its wing tip. —AKM

“There are not many places a guy can get experience with round engines. This is kind of a heaven for it.” —Gary Unruh

10,000: The number of people who visit the Historic Aircraft Restoration Museum each year, including busloads of schoolchildren. 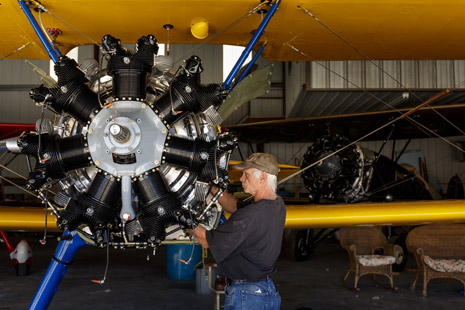 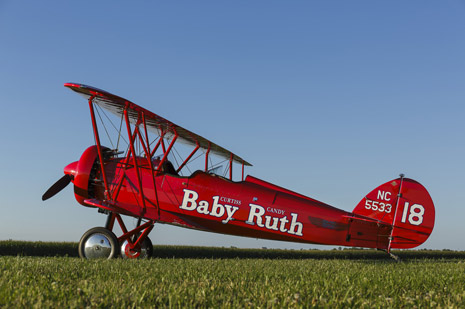 The Waco ATO was sponsored by Curtiss Candy and flown in a transcontinental race. It is the pride of the Cournoyer collection for its hand-rubbed, 30-coat red paint that seems to sparkle when parked in the sun. 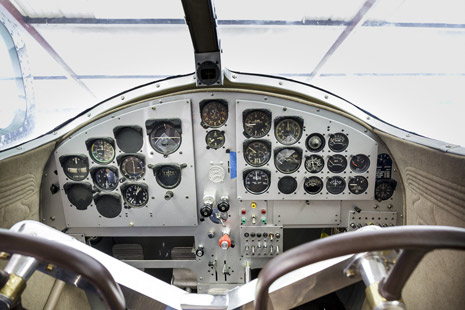 The Spartan’s instrument panel  retains many original instruments, such as the Safe Flight stall indicator light and trim knob, but avionics are upgraded to today’s standards. 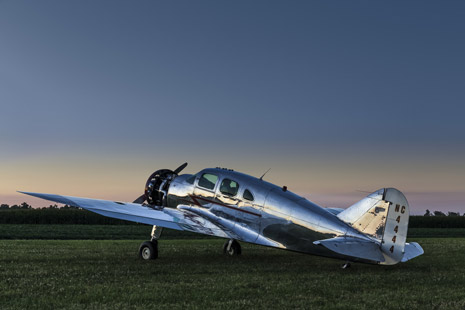 Cournoyer got his start at age 15 working on cars but with his eyes on the sky. When Ozark Air Lines offered him $3.50 an hour to fly in 1954, he permanently returned to the auto body shop where his tools, skills, and salary could better support his hobby. Does he ignore the body shop in favor of airplanes? “I sure do,” Cournoyer said. His nephew supervises the repairs resulting from St. Louis fender-benders while he is at the airport. When he isn’t, a friend’s dog named Pratt is in charge at Olde Style Aircraft, although he often ignores his job to “chase bunnies.” There is no dog named Whitney.

Newly hired worker Gary Unruh, found in an Olde Style hangar working on a Spartan Executive, said one rainy morning in June that his job allows him to follow his passion. “There are not too many places a guy can get experience with round engines. This is kind of a heaven for it,” he said. Airplane mechanic Paul Stewart worked on aircraft at the airport 32 years before joining Cournoyer six years ago; now his 21-year-old son, Tony, works with him. “[My friends] are blown away by it,” the younger Stewart said. He’s been an airport kid since he was nine.

“Old style” to Cournoyer means paint, and friends acknowledge he is a master. Together with restoration builder Terry Chastain, the two have won numerous competitions, including Grand Champion at EAA AirVenture in 2007 with a Waco QCF–2. That aircraft was sold recently to a private owner. Last July Cournoyer’s Pan American Fairchild 71 restoration, which originally operated along the east coast of Mexico in 1928, was a featured attraction at AirVenture. All his aircraft are modernized with brakes, an updated exhaust system, alternators, and avionics.

Spartan Executive aircraft were anything but Spartan, featuring a luxurious interior, a top speed of 200 miles per hour, and a flashy polished aluminum fuselage. The 450-horsepower, 1939 Spartan 7W now emerging from Cournoyer’s hangar went on the market in 1972 after a ground loop at Reno, Nevada, and was purchased by Cournoyer two years later. Quick action in 1993 rescued it from the advancing floodwaters of the Missouri River, which now is contained by a levee.

The aircraft began its life in Colorado after emerging from the factory a half-mile from Tulsa International Airport, and eventually had 15 owners. It was stripped down to the bare structure before the brakes, engine, and upholstery were restored. Cournoyer is justly proud of the Spartan-warrior profile stitched into the cabin’s fabric walls. The symbol remains in use today by the Spartan College of Aeronautics, which was founded in 1928 by oilman William G. Skelly—the same year he founded Spartan Aircraft.

While many of his aircraft are later sold, the Spartan will most likely park in the Historic Aircraft Restoration Museum. “I’m going to keep it,” he said. As of late June he had eight aircraft for sale, because “I don’t need two of everything.” Records show that over the years he has owned four Waco QCFs, four Waco UBFs, and five Waco ATO aircraft.

Roll the “Baby Ruth” Waco into the sun and the hand-rubbed, glass-smooth red paint—all 30 coats of it—begins to sparkle. It’s the flagship of Olde Style Aircraft. The 1928 Waco ATO was sponsored on a transcontinental race by the Curtiss Candy Company, and Baby Ruth was prominently displayed on the fuselage.

It now sports the colors of the Doug Davis Baby Ruth Flying Circus, a trio of Wacos that toured the country performing aerobatics and dropping candy under tiny parachutes on beaches, sporting events, and large cities. If gathering a crowd required first buzzing low through the streets of Pittsburgh, that’s what he did. In those days, the sight of a stunting airplane could snarl traffic and draw schoolchildren out of their classes. Today we call that a violation of federal aviation regulations.

Part of the act was to select lucky youngsters to drop the candy bars. One of those was Paul Tibbets Jr., who tossed Baby Ruth bars above Miami’s Hialeah racetrack and began a dream of becoming a pilot. He did, later dropping the atomic bomb on Hiroshima in the final days of World War II.

Most, but not all, of the aircraft in the Historic Aircraft Restoration Museum were restored by Cournoyer. Creve Coeur Airport has not one but two antique aircraft restoration companies. Glenn Peck’s company, Peck Aeroplane Restoration, works for the museum and restored its Standard J–1 that appeared in nine movies before the museum acquired it—including The Rocketeer, The Great Waldo Pepper, and The Young Indiana Jones, as well as 12 commercials. Peck won a Judges Choice award at EAA AirVenture in 2007 for his restoration of a huge 1919 de Havilland DH–4M2 mail plane.

The Standard J-1 appeared in the opening scene of The Great Waldo Pepper, but developed engine problems and was replaced by a backup. When it was ready to fly again, it was repainted and used for scenes showing Pepper’s stint with Dilhoefer’s Flying Circus. Thinking the public might not remember the Dilhoefer scenes, museum officials painted it to represent its role in the opening of the movie. 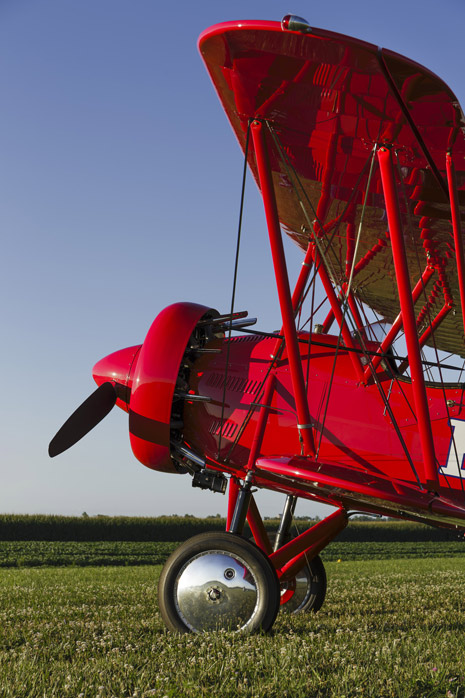 A Waco Taperwing, powered by a 440-horsepower Wright R-975 radial engine, was restored to its days as a nationwide Baby Ruth flying billboard. 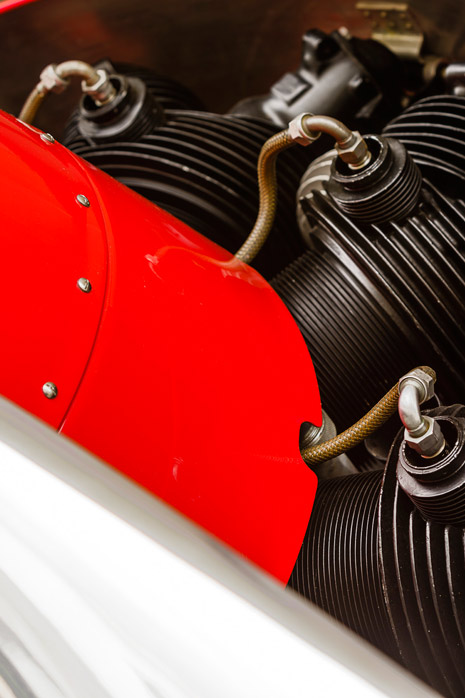 Engine detail from the Baby Ruth. 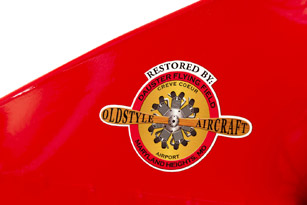 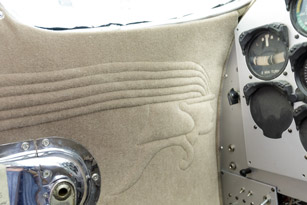 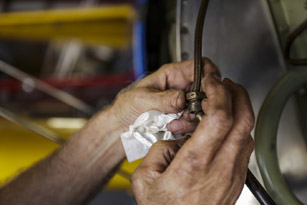 Unruh working on the Spartan engine. 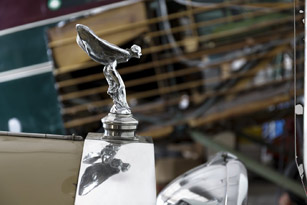 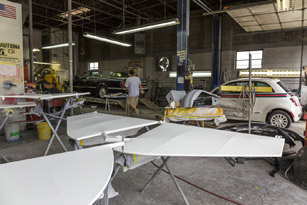 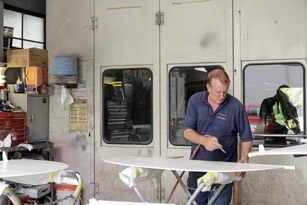