Get the app Get the app
Get the latest news on coronavirus impacts on general aviation, including what AOPA is doing to protect GA, event cancellations, advice for pilots to protect themselves, and more. Read More
Already a member? Please login below for an enhanced experience. Not a member? Join today
News & Media Stemme S10-VT: Powersailing 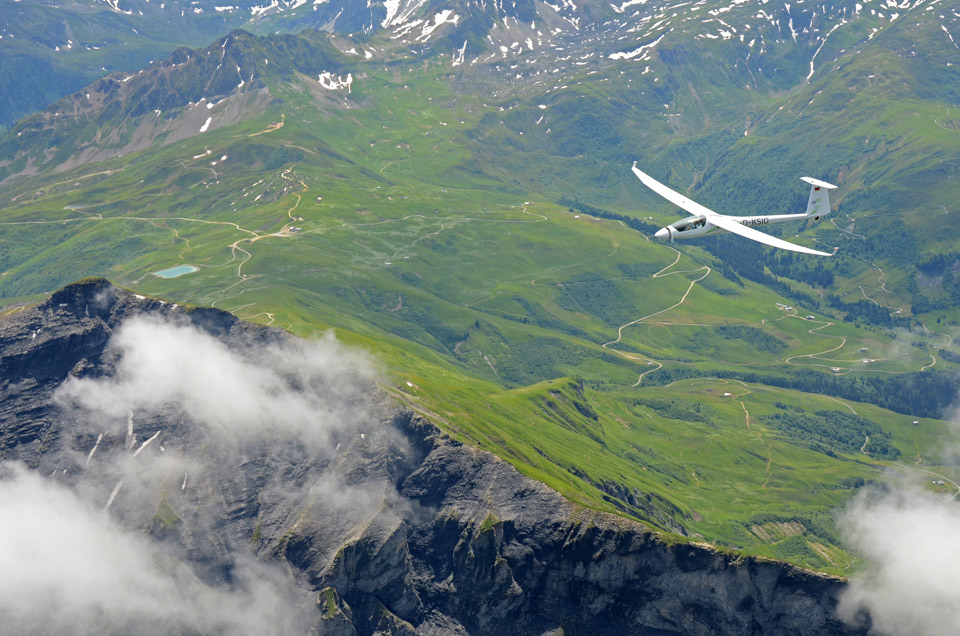 Motorgliders are often viewed as odd birds in the general aviation fleet. These hybrids merge the brute force of a powered airplane with the elegant efficiency of a sailplane—and compromise the attributes of both, many feel. But this is definitely not the case with the Stemme S10-VT. Originally designed in 1984, the German-built Stemme mates a turbocharged 115-horsepower Rotax 914F engine with a sailplane airframe capable of a 50:1 glide ratio. That means it can fly 50 feet for every foot of altitude lost in gliding flight. This gives the Stemme soaring performance equal to that of high-performance, competition-level sailplanes.

What’s more, the engine and propeller installation inflicts no penalty on the Stemme’s gliding and soaring performance. Where some motorgliders use feathering propellers that remain in the breeze, the S10-VT’s propeller stows in a unique sliding nose cone compartment. Want power? Open the nose cone, start the engine, and advance the throttle. Want to fly as a pure sailplane? Slow to the recommended 54 KIAS, shut the engine down, stop the propeller rotation by using a propeller brake control, center the now spring-folded prop using the propeller positioning handle, move the fuel selector to the Off position, and turn off the generator switch.

You say you want your avionics powered while soaring? No worries. The S10-VT can have up to eight dorsally-mounted solar cells and a second battery that can keep the panel alive. In addition to a standard complement of flight, navigation, and communications instruments many Stemmes are ordered with Dynon EFIS-D10A displays; Garmin 695, 696, or G3X GPS units, soaring computers with electronic variometers (very sensitive vertical speed indicators that help pilots identify the areas of strongest lift), and specially designed FLARM collision-avoidance gear. The latter generates TCAS-like warnings when flying in competitions where several gliders may be working the same thermal. For targets to be detected, the other gliders must also be FLARM-equipped. For more information about FLARM units, visit the website (www.flarm.com/). 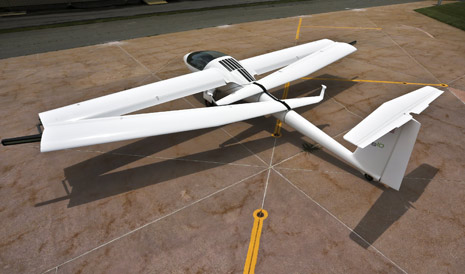 With the wings folded and secured by their straps wingspan drops to 37 feet, five inches. Although the S10-VT is Stemme’s primary product, the company is developing a derivative—the ECARYS, a surveillance, reconnaissance, research, and sporting events version. Endurance is expected to be 20 hours and range 1,350 nm. The ECARYS’s wingspan will be 59 feet—far less than the S10-VT’s 75 feet, six inches. However, it will retain the S10-VT’s folding-wing design, and have detachable wings for transport by trailer or container. 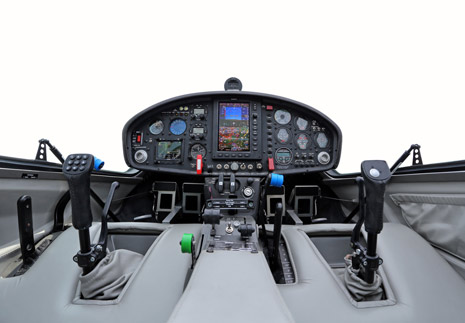 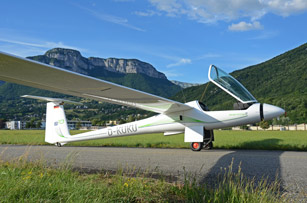 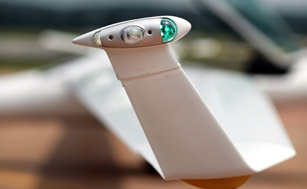 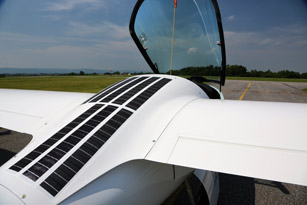 For a longish taildragger, there’s plenty of visibility over the nosefor taxi, takeoff, and landing. At a remote strip in Switzerland (left),a Stemme poses with its jettisonable canopy, propeller dome, and engine cooling doors (beneath the wing) in the open positions. Nav lights atop the new winglets permit night flying (center). Up to eight solar cells—for powering avionics in soaring flight—can be mounted on the fuselage (right).

During powered flight, the Rotax can deliver true airspeeds as high as 140 knots. However, that’s with the engine running at its 5,500 rpm maximum continuous power setting. A more typical cruise speed setting would be 5,000 rpm, which yields 120 KTAS at 6,000 feet and a fuel burn of 5.5 gph.

The Stemme’s 75-foot wingspan and 201-square-foot wing area make its soaring performance possible, but a span that huge poses issues during ground operations. That’s why the Stemme uses a folding-wing design that lets you pull the outer wing sections away and fold them over the inboard sections.

While the Stemme does have some exotic attributes, it’s actually fairly straightforward when it comes to flying—once you’ve had a bit of education. The cabin entry procedure is one example. In the interest of drag reduction, there are no entry steps. Instead, you have to back your rear end into the junction of the wing root and fuselage, and then muscle yourself up onto the canopy sill. From there, you swing your legs over and climb in.

Once inside, you’ll find the reclined seating position very comfortable, and the cabin surprisingly wide for such a slippery design. And if you’re not a glider pilot, you’ll also find some unfamiliar controls. There’s an air brake lever, which raises and lowers the wing’s spoilers; a trim handle instead of a trim wheel; and a flap lever that lets you set both positive (for landings and slow flight) and negative (for high-speed flight) flap deflections. Storage for two optional oxygen bottles is behind the seats, and so is space for minimal baggage. 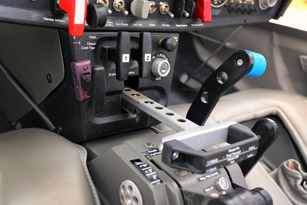 To lock the nose cone closed, shut the engine down and pull on the locking handle. 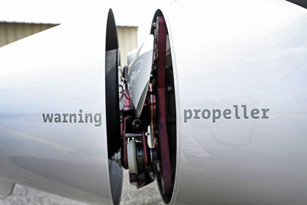 Prior to stowing, the propeller must be stopped and centered. The 75-foot wingspan explains the Stemme’s soaring performance. 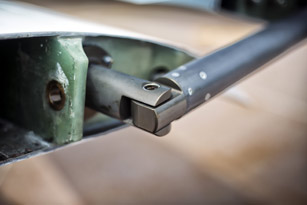 Why oxygen? Did I mention that the S10-VT has a service ceiling of 30,000 feet? In fact, Stemmes have been involved in high-altitude mapping as well as mountain wave, gravity wave, and turbulence research projects over the Andes and Himalayas since 1999.

My flight in the S10-VT didn’t involve such rarified locales—unless you think central Maryland is a match for Nepal—but it was an eye-opener nonetheless. Under the watchful eye of Andreas Hebner, Stemme’s sales and flight operations director, I clambered into the Stemme and popped open the nose cone. This automatically does two things: it turns on the Rotax’s fuel pumps and opens the cooling doors. After turning the ignition key to the Start position, the propeller begins to turn; when centrifugal force overcomes the stowing springs, the propeller blades extend to their full length. Once the propeller spools up, the electronic ignition kicks in and the engine starts. The engine, by the way, is behind the cockpit and drives the propeller via a clutch assembly and a carbon fiber drive shaft.

For takeoff, it’s full power and a liftoff speed of 46 knots. The Stemme is a taildragger but the view over the nose is pretty good, and it doesn’t take much forward-stick pressure to getthe tail up. Once off the ground Hebner said the drill is to accelerate in ground effect until reaching the VY of 62 knots, then climb away as you bring up the electrically actuated retractable main gear. Then comes a power reduction from the 5,800-rpm redline to a climb power setting of 5,500 rpm. As we headed west for the Appalachian foothills, the ship registered a 600-fpm climb rate.

A few minutes later we were at 6,000 feet, above a cloud layer. It felt odd to shut down the engine, but instantly we were enveloped by that silence so coveted by glider folk. A yank on the propeller brake and the prop stopped. The prop springs retracted the blades, and another tug on the prop positioning handle moved the prop assembly so that the nose cone could be stowed. The headsets came off, and all you could hear was the whisper of the wind. 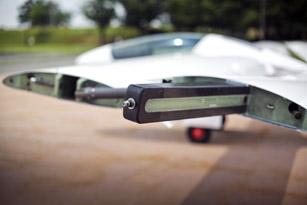 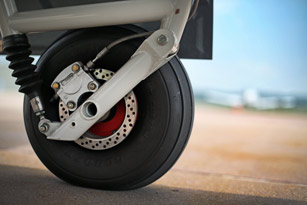 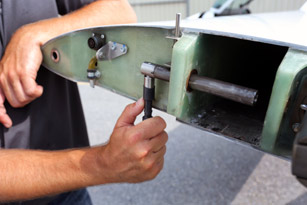 With the wingattach pin removed—or improperly secured—a wing-connection safety pin projects above the upper wing surface, indicating the wings are not properly secured. 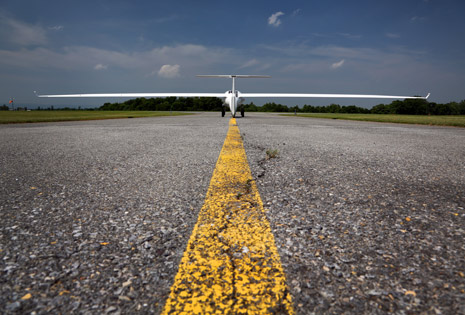 There wasn’t much in the way of lift that day, so soaring conditions were less than favorable. Even so, on previous Stemme flights I’ve seen 1,500-fpm climbs in pretty weak thermals, and Stemme pilots will tell you of ascent rates that peg the VSI, with the variometer screaming away as it senses strong lift.

After some airwork, it was time to make our way back to AOPA’s home base at Frederick Municipal Airport in Maryland. Using the best lift-over-drag airspeed of 56 KIAS—the Stemme’s best glide speed—our sink rate was a mere 200 fpm. Weended up having to circle to lose 4,000 feet as we descended to pattern altitude. Once there, it was gear down below the 76-KIAS VLO and a 30-second wait for the gear to fully extend and lock.

I did the approach and landing as a glider, using the recommended 59-KIAS approach speed and two notches of flap. Stemme recommends three-point landings, and so a three-pointer it was. Touchdown and rollout were uncomplicated, but there are a few caveats about landings. One is to try to maintain a wings-level attitude close to the ground, and use only rudder for directional control.

Those big wings are great for soaring, but obviously a drawback when dealing with crosswinds. Although Stemme publishes a maximum demonstrated crosswind component of 16 knots, Hebner says he’s comfortable landing with 25-knot crosswinds. The wing’s lift is degraded in rain, so Stemme says to increase approach airspeeds in rain by 10 percent. Rain also increases takeoff runs by up to 50 percent, decreases climb rates by up to 50 percent, and lowers cruise speeds by up to 30 percent.

But these are minor inconveniences to Stemme owners. Some 250 Stemmes are flying worldwide, and there are 40 Stemmes flying in the United States. At $446,600, the Stemme is definitely a boutique product aimed at a very selective niche.

That niche may be set to expand. Stemme’s marketing efforts and maintenance network in the American market have been diminished over the past dozen years. Recently, however, the company has hired former Cessna executive Mark Stevenson as president of the newly-formed Stemme USA, Inc. organization. Stevenson says that the number of Stemme service centers will soon expand from one to six. And for the first time in 10 years, Stemme has had a presence at both the Sun ’n Fun and EAA AirVenture events. In another development, Stemme has announced plans to buy LSA manufacturer Remos, thus expanding its product line and acquiring the Remos manufacturing facility in Pasewalk, Germany.

It’s Stevenson’s theory that the Stemme’s classification as a glider will bring more customers in coming years. After all, a medical certificate isn’t required to legally fly the Stemme—just a private pilot certificate with a glider rating and an instructor’s self-launch endorsement. To those in the aging, bell-shaped curve of the pilot population, that alone may sway buying decisions. 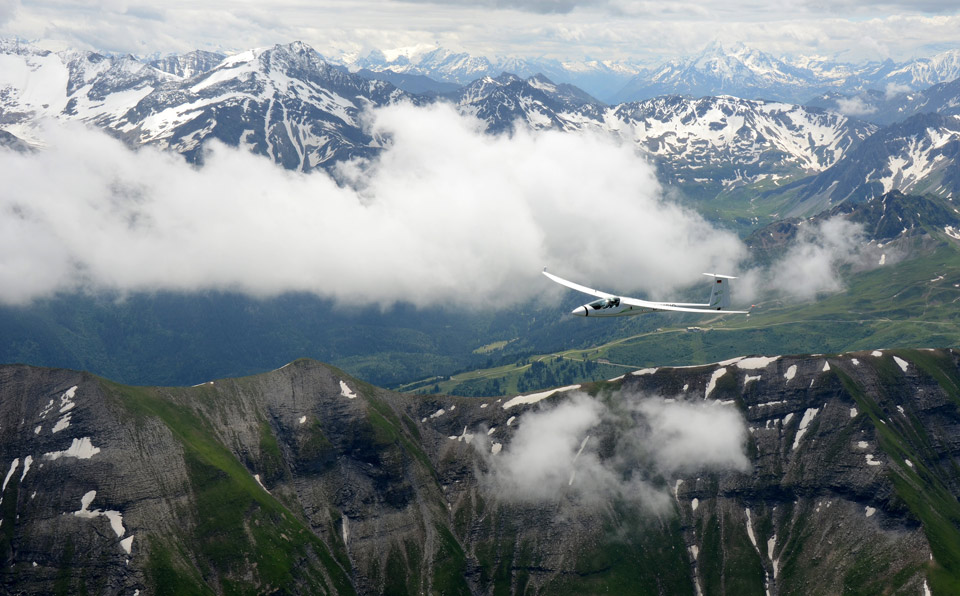 Extra
Most prefer to land the Stemme as a glider. But if a go-around is anticipated, you can approach with the nosecone open. This way, an engine restart and climbout can begin in a matter of seconds. 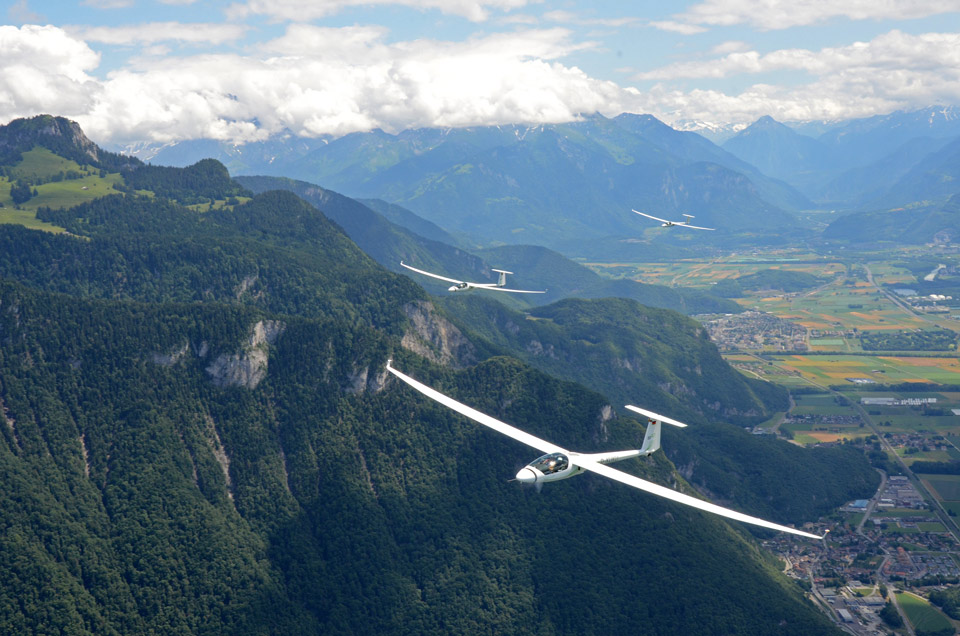