Get the app Get the app
Already a member? Please login below for an enhanced experience. Not a member? Join today
News & Media ‘Glider Bob’: Robert B. Saunders

Colorful character in the glider world

Anyone who has ever been around Stemme motorgliders will remember its most colorful and enthusiastic demonstration pilot, Robert B. Saunders. 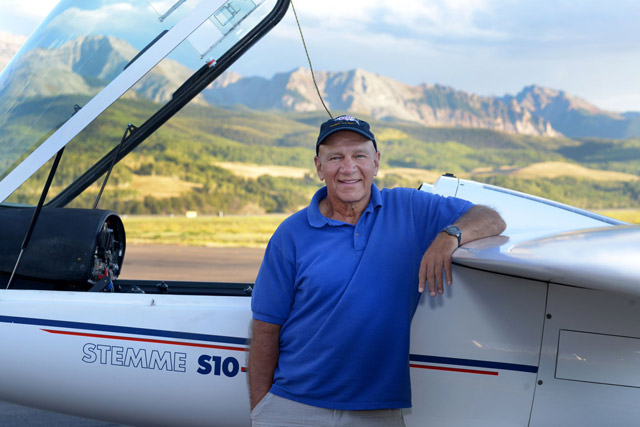 Anyone who has ever been around Stemme motorgliders will remember its most colorful and enthusiastic demonstration pilot, Robert B. Saunders. Known to all as simply “Glider Bob,” Saunders started working for Mark Arnold, Stemme’s first United States sales representative, in 1996. America was a brand-new market for Stemme’s high-end motorgliders (see “Power Sailing,” page 58), and Arnold needed a demonstration pilot. On a trip through Telluride, Colorado, Arnold ran into Glider Bob at the airport, where he operated Telluride Soaring. Saunders made a living by flying tourists in his two-place Schleicher ASK-21 sailplane, towed aloft by a Cessna 150 that he upgraded himself with a 180-horsepower engine.

Arnold wanted to sell Glider Bob a Stemme. “But it was one of the first Stemmes, and it had a 93-horsepower Limbach engine, which was basically a Type I Volkswagen Beetle engine,” Saunders said. “I told him that it wouldn’t get off the ground up here in Telluride.” (Telluride’s field elevation is 9,078 feet above sea level). But when Stemme made the switch to the turbocharged 115-horsepower Rotax 914F engine in 1997, Saunders started working for Arnold as a demo pilot and flight instructor.

What followed was a career spanning 13 years and 4,000 hours as Stemme’s face to the U.S. public. He was unforgettable, in his shorts, sandals, and sailplane pilot’s hat.

Glider Bob’s official employment with Stemme ended in 2010, but he’s still a very active demonstration, delivery, and instructor pilot for the company. His biggest thrill? “I took Neil Armstrong up in a Stemme in 2007,” Saunders said. “He flew gliders back in Ohio and had a place in nearby Mountain Village, so I put him in the left seat and he did great! What an honor it was to fly with him. He was such a humble, pleasant gentleman.”

On another demo flight, he flew with an older African American who showed up at a gliderport north of Phoenix. “This guy took the stick and he had the feel!” said Saunders. “So I asked him if he flew before and it turns out that he was one of the Tuskegee Airmen.”

Eventually Saunders did buy his own S10-VT, which he now uses in his latest Telluride-based business venture, Glide Telluride. “It’s pricey, true, but it’s all because of the exchange rate. When the euro started in 1999, the exchange rate was 85 cents to the dollar; now it’s up near $1.40. So while the base price in euros—about $220,000—hasn’t changed, the euro’s strength has pushed up the price,” Saunders said.

Saunders spends his days flying tourists in his Stemme, cruising and gliding at 14,000 to 15,000 feet, on oxygen, with his many customers. He said one passenger summed up non-pilots’ responses by saying that he was debating whether to go to church or take a motorglider ride. “I think I just did both” was his conclusion.

You’ll likely find Glider Bob aloft in his Stemme, flying “along the north ridge, soaring to 15,000 feet and taking in that magical view.”