Get the app Get the app
AOPA will be closed July 4th, in observance of the Independence Day holiday. We will reopen at 8:30 am ET on Tuesday, July 5.
News & Media First Look: 206 has nine lives 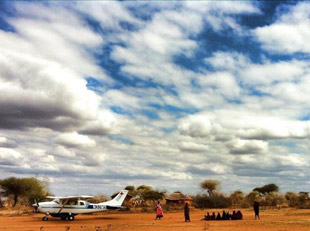 Hoerstkamp is an experienced aviator and a longtime volunteer for the aviation charity, transporting sick and disabled patients to advanced medical care using the nonprofit’s twin-engine, specially outfitted air ambulances.

He was on a ferry flight to deliver the 158th Wings of Hope airplane to its humanitarian operation in Tanzania, an east African country that is home to the Maasai, a tribal people Wings of Hope has been helping for more than 20 years. Wings of Hope provides medical care to 30,000 Maasai each year, primarily via flying medical clinics. And the base had been without an airplane for nearly four months.

As he flew into the clear sky that morning, he knew that he was delivering more than a STOL-equipped Cessna 206. He was delivering hope, and making good on a promise to care for a people who had come to count on Wings of Hope and its airplanes.

“Our donors are trying to make the world a better place. And they’ve often told me they support us because we deliver humanity to the world’s poor without any agenda,” says Wings of Hope President Doug Clements. “We help our fellow man because it’s the right thing to do. It’s that simple.”

A workhorse in the field

The Cessna 206 is a workhorse. Nowhere is this reputation for toughness more on the line than when flying humanitarian missions for Wings of Hope. This particular 206 came as a donation from a Rotary Club in 1993 when it was nearly 20 years old. Shortly thereafter, it was sent to Guatemala.

“Our primary mission was to help people get reestablished in their villages after the civil war,” said Daniel Creech, the first field director for Wings of Hope in Guatemala.

Because the country’s roads and bridges had been destroyed during two decades of war, the 206 became a vital means of transporting construction materials and medical and school supplies. It also helped the poor get their agricultural products to market. “Medical emergencies happened almost on a daily basis,” Creech recalled. “We would drop everything to handle those.”

Wings of Hope also used the airplane in Belize. It was on a return flight from San Pedro, Belize, over the water, that one of the propeller blades broke off at the hub. Creech made an emergency landing about 30 miles off the coast of Ambergris Caye, the largest island in Belize. Local fishermen saw him splash down and, within 10 minutes, pulled him out of the shallow waters.

Wings of Hope flew a crew down to Belize. They were able to retrieve the airplane from the bottom of the Caribbean with help from local villagers.

The airplane was shipped to St. Louis, where it was refurbished and returned to Guatemala. A couple of years later, it was transferred to another Wings of Hope base in the South American country of Guyana. By 2008, the 206 was back in St. Louis, where it was used in the U.S.-based Medical Relief and Air Transport Program, for which Hoerstkamp and 36 other pilots volunteer their services. Then, its Continental IO-520 was needed on another airplane heading to South America. So the 206 took a vacation from the field until its refurbishment for Hoerstkamp’s journey to Africa.

In Tanzania, the airplane will fly weekly medical clinics and emergency medical evacuations. It will also be used to deliver humanitarian assistance to the tribal people on an ongoing basis.

On May 22, after many stops and starts because of weather, engine troubles, and delays with paperwork and permits, Hoerstkamp touched down in the northern Tanzanian city of Arusha.

“Everyone was happy to see the airplane—and me, because I brought it,” he joked.

A seasoned flight instructor, Hoerstkamp planned to remain at the base for a few weeks teaching the local pilots better short-field operations on rugged bush-country airstrips. Beyond the practical reasons for this training, Hoerstkamp shared a personal one.

“This airplane has become like a friend,” he said. “I would hate to see anything happen to it.”