Get the app Get the app
AOPA Members DO more LEARN more SAVE more - Get MORE out of being a pilot - CLICK HERE
News & Media Flying Clubs: Beechcraft, Cessna flying clubs merge

Two venerable flying clubs in Wichita are looking to the future after they merged into the Textron Aviation Employees’ Flying Club. 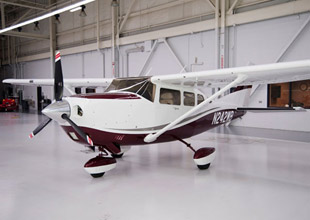 Don Woodward is the club manager who was charged with merging the groups. “Both Beechcraft and Cessna had flying clubs with great traditions, but it only made sense after the merger under Textron to join forces and make the club even better,” he said. “Beechcraft and Cessna employees are excited about the merger. Both clubs have a long, proud tradition, and we want to keep honoring that.”

The fleet under the merged clubs includes 22 aircraft, said Woodward. In the Beechcraft line, the club has four Sundowners and five Bonanzas; in the Cessna family, it has six 172Ss, two 206 Turbos, one 182, one Turbo 182, one 172RG, one 182RG, and one Skycatcher.

“It’s exciting for both groups because Beechcraft members can now train in the 172, one of the best training aircraft ever built, and Cessna members now have access to the Bonanza, which is a great aircraft.”

The number of members of the Textron Aviation Employees’ Flying Club is still rather dynamic, but it’s about 480 members after the merger, said Woodward. “Those eligible to join are Textron Aviation employees based in Wichita and their families, along with retired employees,” he said.

The club is based at Beech Factory Field, said Woodward.

Each year the Boeing 707 used as Air Force One by four presidents, but more importantly used as the shuttle by Secretary of State Henry Kissinger when negotiating China diplomacy breakthroughs, spends its winters in the Seattle rain and looks a little drab by spring. Each year since 2003 a volunteer group of car detailers organized by Renny Doyle of Los Angeles has spent the next summer cleaning it up.

“It will be a huge relief to me when our new building is completed to house it and the first Boeing 747,” said Dan Hagedorn, senior curator and director of collections for the Museum of Flight. Doyle runs a training school for detailers. The car detailers have spent most of their effort on the exterior, although they did clean the interior. The museum is installing new plastic protective plates on key artifacts inside to prevent damage during public viewing.

Although the aircraft operated as a special mission aircraft for other government officials like Kissinger, its presidential interior was never changed. —AKM