Get the app Get the app
AOPA Members DO more LEARN more SAVE more - Get MORE out of being a pilot - CLICK HERE
News & Media People: Closing a chapter

On July 29, 1968, investigators with the Rio Blanco County Sheriff’s Office in Rangely, Colorado, drove south of town to the scene of a fatal airplane crash. 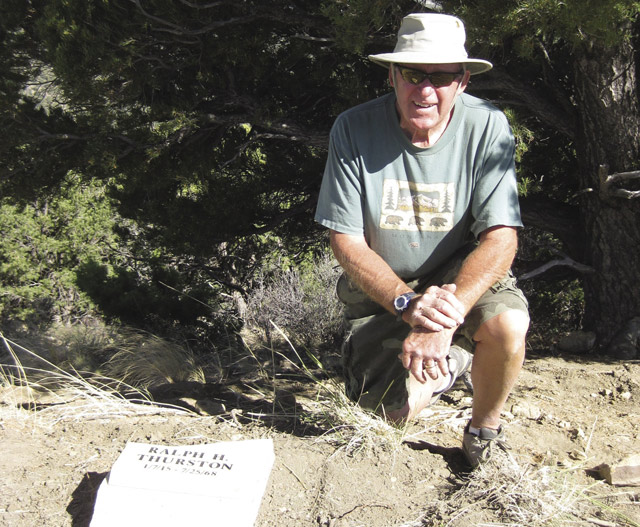 On July 29, 1968, investigators with the Rio Blanco County Sheriff’s Office in Rangely, Colorado, drove south of town to the scene of a fatal airplane crash. Spotted a day earlier by a Civil Air Patrol pilot, the wrecked Cessna 182 and its pilot, Ralph Thurston, lay at the bottom of a ridge at Douglas Pass.

Thurston, a geologist, was flying from Lander, Wyoming, to Blanding, Utah, when he struck the ridge line. An active pilot who had owned several aircraft, the 53-year-old had flown frequently for business and was most likely en route to a uranium mill that he owned in Blanding.

Thurston’s grandson, Eric, was 1-year-old at the time. His father, Jim Thurston (in photo), never talked about the accident. “There were strained family relations,” Eric Thurston said. “There was never a funeral, and never closure to his life.”

Thurston thought about his grandfather often. In 2009—now working in the software industry—he began researching the accident. Emails to the Rio Blanco County Sheriff’s Office resulted in a bounty of information: the accident report, a death certificate; handwritten notes by the investigators, topographical maps, and Polaroids of the crash scene. The accident report indicated that Ralph Thurston “was known to get sleepy while flying or driving. Also supposedly had lung cancer.”

“The next morning, I went to the flight school and I said, ‘I’m going to learn to fly,’” Thurston said. He’d wanted to take lessons but was hesitant. He’d often imagined his grandfather’s accident as a scene in which the airplane flew into a granite wall and exploded into flames. When he learned the facts, Thurston was able to set aside his qualms. He now is an instrument-rated pilot with about 200 hours.

Researching the accident brought painful memories to the surface for Jim Thurston, but also good ones. He began to tell Eric stories: about how Ralph and Jim would fly a criss-cross pattern over the Black Hills of Wyoming with a Geiger counter on board in search of uranium, and found it. How Ralph would fly over the family home in Lando, “rev the engine and tip the wings,” and that was a signal for someone to come pick him up at the airport.

In 2012, father and son visited the crash site. Using Google Earth overlaying the original topographical maps, they found the spot—and a surprise. The Cessna 182 was still there, mostly. “Everything is there except the tail and engine,” Eric Thurston said. They laid down a small grave marker that overlooks the vistas and held a memorial service for Ralph Thurston. His grandson brought home a rusted tachometer.

“Getting there, and seeing the airplane and the wreckage was emotional and very healing,” Eric Thurston said. “It’s brought us closer together.” Perhaps just as important, Ralph and Jim Thurston “finally got that closure.”

Using Google Earth overlaying the original topographical maps, they found the spot—and a surprise. The Cessna 182 was still there—mostly.