Stuck between scud, turbines, and storms

I have been flying for more than 40 years and own a well-equipped Cessna Skylane. I almost always file IFR in good weather and bad. 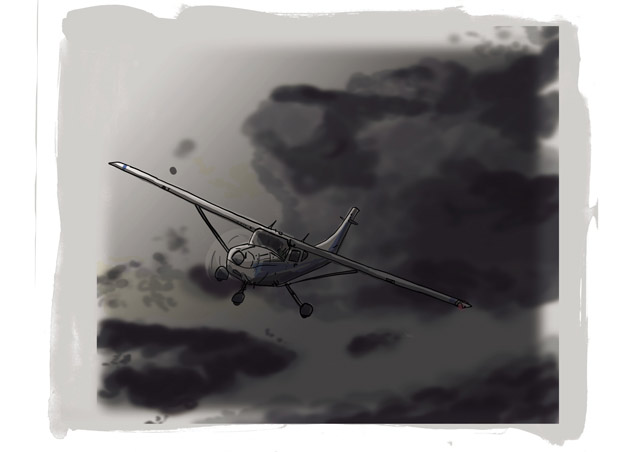 I have been flying for more than 40 years and own a well-equipped Cessna Skylane. I almost always file IFR in good weather and bad. On this day, I faced the potential discomfort of getting thrown around in cumulus clouds while waiting for vectors to divert and beating against very strong headwinds. Across my course was a cold front oriented northeast to southwest, crossing my path from Lansing, Michigan, where I live, to Bloomington-Normal, Illinois, where I work. The tops were around 25,000 feet, so I couldn’t get on top, and even if I could the headwinds at altitude were punishing. Filing IFR on this day was not attractive.

The ceilings forecast underneath all of this weather were around 2,000 to 3,000 with scattered rainshowers and thunderstorms. The southern end of the weather was in central Illinois, where there was only scattered precipitation with ceilings forecast to be 3,000. I reasoned I could skirt the weather flying VFR over flat land down the eastern side of the front. Using my Garmin GTN 650 to avoid obstacles and a Garmin 396 with XM weather to avoid heavy precipitation, I would minimize my exposure to the headwind. I could turn south if necessary to avoid low ceilings, so I had an out, and, judging from the radar images, I would be able to fly into Bloomington under the forecast 3,000-foot ceiling while dodging any showers in the area.

It seemed like a solid plan. And it worked well for the first 90 minutes. The XM Nexrad depicted daunting weather just to my right, but the ride was good and my groundspeeds were not that bad.

As I approached the Indiana-Illinois border, the ceilings were lower than forecast and appeared to be dropping. I reluctantly descended from 1,900 feet agl to 1,600 feet agl, veering more to the south, and then to 1,200 feet agl. This area of the Midwest has multiple large wind farms with wind turbines reaching nearly 400 feet above the terrain, and when the clouds pushed me down even further to 700 to 800 feet, these turbines appeared on the GPS display in great numbers to the south—my planned escape route.

Worse, my altitude was now uncomfortably close to theirs, and sunset was at hand. I could see a layer of scud directly in my path, and this was becoming more difficult to contrast with the ground in the waning daylight. I soon found myself pinned between the wind farms to the south and the awful weather to the north. I was too busy dodging wind turbines and clouds to look up the frequency for Chicago Center to ask for a vector and an urgent clearance, which at that altitude would not likely have been possible without declaring an emergency. I was almost too busy to do anything but dodge towers and weather. Ultimately I was reduced to flying in a circle at about 500 feet above the surface while alternating my attention between the towers displayed on the GPS, the clouds outside the windshield, and the ground, which had gradually become closer and darker.

The GPS showed a small airport nearby, Kentland Municipal (50I). I looked down and found it just below the left wingtip, and I could see it well enough to land in the fading light. I realized that I was beaten; I was only a few minutes from an emergency. I had to land. When the decision was made, the feeling of relief was surprising and immediate. I circled and set it down.

After landing I taxied to the ramp, idled, set the parking brake, and sat thinking through a problem that I had not considered three minutes earlier. How was I going to get out of this? The cabin lights were on and the cabin was warm, but outside it was windy and rainy. The FBO appeared to be closed. I was supposed to be to work early the next morning, and here I was in the middle of nowhere without transportation.

I initially pulled out my cell phone and began filing an IFR flight plan, but then asked myself if I was really ready to tackle the rest of the flight and possibly a low IFR approach at night. I saw an SUV parked by the FBO. I shut down and walked over to the vehicle to find it was a police officer there only by chance, as he had driven to the airport to check on something unrelated. I learned from the officer that the FBO had a code on the door, so we walked in. He said there was a courtesy car there, and pointed out a retired Crown Vic police cruiser.

The next morning I got up early and learned that the ceilings at Bloomington were 3,500. The local ceilings were more like 2,000 but high enough that I could get to Bloomington VFR. Wait a minute! I might be dumb but I’m not stupid. I filed IFR, and enjoyed an uneventful flight to Bloomington-Normal in time for work.

Over the years I have read articles and books warning that scud running should never be attempted unless you are an experienced IFR pilot. I had a solid plan, but multiple gremlins narrowed my options rapidly. I have heard it said that pilots start flying with two buckets. One is filled with luck and the other is empty and waiting to be filled with experience. The goal is to fill the experience bucket before the luck bucket becomes empty. I have considered my experience bucket to be pretty full and have used up a fair share of my luck, but this experience proved there was room for a little more experience. Fortunately for me, my luck bucket wasn’t yet empty.

Cliff Hale holds a private certificate and instrument rating. He has been flying in the Great Lakes area since 1970 and has more than 1,700 hours, mostly in a Cessna 182-G.

Digital ExtraHear this and other original “Never Again” stories as podcasts every month on iTunes and download audio files free.