Get the app Get the app
Already a member? Please login below for an enhanced experience. Not a member? Join today
News & Media Ownership: How to fly an airplane

Ownership: How to fly an airplane 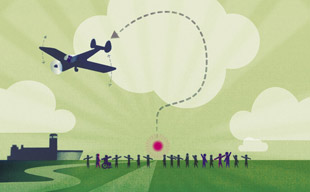 I hold both advanced and instrument ground instructor certificates, so without fully considering the consequences, I said, “Sure thing, I’d be happy to.” But as I sat down late that night to draw up the lesson plan—fortified with a glass of red wine and prepared with blank pad of paper—I realized just how challenging my task was going to be.

After all, how do you fly an airplane?

I knew this was an opportunity to expose the next generation to the joys of flight, and I keenly felt the responsibility to do it right. I had to make it educational and age-appropriate, but I also had to make it fun. I had to bring flying into the classroom.

Perhaps a field trip was in order.

It took a few calls—well, more than a few—but I managed to arrange a two-pronged learning experience. I would come into the classroom for a few hours one week to set the stage with a little talk and a flight simulator, and the next week the kids would pile into a school bus and head out to their “home” airport, where they would get a tour of the historic field from the local airport manager, learn about airports in general, and then “meet” our family’s airplane, a 1947 Ercoupe.

There was no way to arrange to take them all up for a flight, but at least each child could see a real airplane up close. They could touch her, run a hand along the leading edge of her wing, clamber inside, sit in her. Breathe in the sights, the smells, and the sounds of aviation.

Clearly, this was going to take more than one glass of wine.

In the end, I decided to start with a technology I was pretty sure the students already understood. I opened the class with the simple question: How do you drive a car? The answers flew out in no particular order: You wear a seatbelt, you turn the wheel, you step on the gas, you start the engine. Well, we do pretty much all of that in airplanes, too.

Then we talked about bikes. I asked them to think about the difference between making a bike turn and making a car turn. After that, I stitched the concepts together: The controls of an airplane look like those of a car, but they make the airplane lean like a bike.

Next they needed to make the big leap. I had them brainstorm the difference between cars and bikes—and airplanes. It was so obvious it took them a while. Finally one kiddo got it. “Well, cars are stuck on the ground. Airplanes are up in the sky.” Right. Three dimensions instead of two.

I had decided in advance that it was no sin to simplify vertical travel. Yoke-back, nose-up makes the airplane climb. Yoke-in, nose-down makes the plane dive. Introduction to Fifth Grade Aerodynamics is not the place to get into the use of power for altitude control. So with that, we moved to the simulator so they could see that, unlike a car’s steering wheel, the yoke could be pushed in and pulled out, rather than just turned left or turned right.

On the screen of a borrowed laptop was the glorious view out of the front of an Ercoupe sitting on the runway of the local airport. I ran them though the classic six-pack of flight instruments, explaining what each was for. Then it was time to show them how to fly an airplane. The wonder and excitement the kids felt behind the controls of the simulator was no surprise to me. But what did surprise me was just how well they flew.

One boy, after landing successfully on the upwind taxiway, announced, “I’ve decided I’m going to be a pilot when I grow up!”

A week later, on the apron, I unload a pair of stepstools to make it easier for little legs to get up and down from my wings, and tidy up the cockpit. The airport manager, whom I’d only talked to on the phone previously, comes out and greets me with, “What a cool-looking airplane.”

I get that a lot. But I never tire of hearing it.

As the school bus drives up, I realize I have not prepared any sort of lesson plan for the airport visit. I’ll have to earn my teaching wings by winging it.

As the Ercoupe is parked with her twin rudders facing the terminal, we start at the tail. We move around the blue and white bird with me pointing out each part of the airplane, naming it—rudders, elevator, trim tab—and explaining its purpose. At the right empennage, I invite them to touch. They stroke the 67-year-old airplane’s skin tenderly, run hands lovingly over the deep-set rivets. We move on to ailerons, position lights, landing gear.

Then, one at a time, they jump up like jack rabbits onto the wing and into the cockpit, “This is so cool!” I hear time after time. As they sit behind the yokes, I lean in from the wing and run through the various instruments and controls with them. They remember the flight controls from the simulator. But because they didn’t get to actually fly, I wouldn’t have predicted the level of sheer excitement generated by just sitting in an airplane. But it’s palpable. Even the teachers join in.

It was getting to be time for me to fly off into the sunset. Well, OK, it was actually only 10:30 in the morning, but I was planning to depart to the west. Before I left, my plan was to do a couple of fly-overs at the minimum legal altitude of 500 feet over “any person, vessel, vehicle, or structure.” Sadly, in addition to their first introduction to flying, it was also their first introduction to the regulatory environment we fly in.

“How will we know when you are done?” asked one of the boys.

“Will we be able to see you wave from way up there?” asked one of the girls.

“Oh, I won’t wave goodbye myself,” I told them, “The airplane herself will wave goodbye to you. Like this.” I stuck my arms out like wings and used my body to demonstrate wing wagging.

Then, I handed the preflight checklist to the nearest kiddo. “Read me the first item on the list, and I’ll show you what it’s all about and why it’s important.”

What unfolded was the longest, and most delightful, preflight in the history of aviation. Group preflight turns out to be a great teaching tool. I was able to weave in more basic aeronautics and also tell them of a few of the hair-raising discoveries I had made in preflights in my 33 years of flying.

Flying off into the sunset

It was time for the kids to see an airplane fly. Throttle open one-quarter inch. Mixture to full rich. Carb heat off. Ignition to both. Prime. Master on. I pull the starter and the old Continental roars to life. I glance over my shoulder and look out the back window towards the terminal. The kids are jumping up and down and cheering. I advance the throttle to 2,000 rpm to wow the crowd. Then I throttle back, release the brake, and start the taxi to the active runway.

While I was taxiing out, and over sack lunches after I left, the local airport manager spoke to the children. My wife, who was assisting in ground-control duties, later filled me in on his side of the field trip.

The manager, who’d been at his post for more than a dozen years, talked to the kids about the history of the airport, showing them photos of Charles Lindbergh’s visit in 1928 (when the field was literally a field) and the first airmail airplane in 1933. He told them that in World War II the airport had been a training base for Navy mechanics. He talked to them about the different kinds of airplanes that come in today, which range from Piper Cubs to modern composites to fire-fighting helicopters to corporate jets. He said, “The world becomes a small place because people from everywhere fly in. Italy, Germany, Spain. You never know who’s going to fly in and walk through your doors.”

Meanwhile, runup complete, I accelerated down the runway and lifted off. How do you fly an airplane? By teaching it, I had the answer: Have some fundamental physics under your belt, understand some basic aerodynamics, and know a few things about how airplanes work. Blend that with the skills of driving, biking, the right procedures, some practice, and a heavy dose of the love of flying.

I leveled off at 500 feet agl, made a slow, wide turn back toward the terminal, and began my “air show.” I circled twice to the right, did a direct overflight, then banked back to the left and overflew one last time.

As I depart toward the west, I wagged my wings. I didn’t see it, but back on the ground, my wife told me that all the children held their arms out to their sides and waved back, “airplane style.”

William E. Dubois, AOPA 831372, holds a commercial certificate with instrument rating, and advanced and instrument ground instructor ratings. He’s a proud member of the AOPA Foundation’s Hat in the Ring Society, and wishes every pilot would see the logic of investing the cost of one hour of flight time a month to ensure a lifetime’s worth of hours with the freedom to fly.