Get the app Get the app
News & Media Proficiency: Get your head in the game

Proficiency: Get your head in the game

Ace the instrument proficiency check with this quick online course

“Nobody likesto take the instrument proficiency check,” said the woman at the front desk of a local flight school. But there are ways to make it almost fun, and that’s by taking a quick review course before presenting yourself to the instructor. 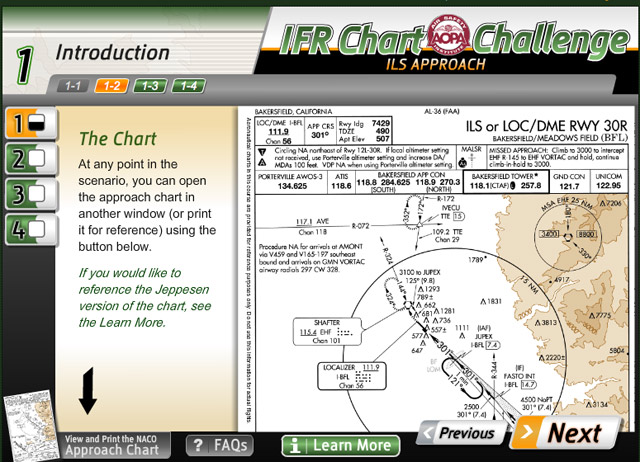 “Nobody likesto take the instrument proficiency check,” said the woman at the front desk of a local flight school. But there are ways to make it almost fun, and that’s by taking a quick review course before presenting yourself to the instructor.

My most recent instrument proficiency check (referred to as an IPC) presented a double challenge. I decided to concurrently check out in an airplane I had never seen before and take an IPC. The flight school doesn’t combine tasks, meaning that I did the usual series of aerodynamic stalls, steep turns, and slow flight both visually and then under a view-limiting hood. Since the school requires six landings for an unfamiliar-aircraft checkout, the flight to accomplish both goals was two hours and twenty minutes. The Cessna Cutlass RG, basically a 180-horsepower Cessna 172 with retractable gear, had no GPS or electronic gizmo newer than 30 years, so it was a trip back in time to the days when airplanes had wooden spoke wheels and were powered by oxen on a treadmill turning the propeller. Runways were ruts worn into solid rock. (That never happened? Whatever.)

The lesson learned was to never take an IPC in an unfamiliar aircraft, let alone one with unfamiliar avionics. I did get signed off, but only with severe strain on overworked sweat glands. The flight school exactly follows not only the required task list published by the FAA in the Instrument Rating Practical Test Standards, but the school’s own checklists as well. The combined checkout and IPC classroom review took two hours, and each checklist was signed by the instructor and me; the paperwork was much like closing on a house. “Sign and date here, please, and here, also there.” It went faster than it might have because I cheated—I studied the answers in advance.

AOPA’s Air Safety Institute offers a lot of free courses aimed at introducing new topics or quickly taking the rust off old ones. The 30-minute course I chose a few hours before starting the IPC was IFR Insights: Regulations. I thought that might be my weakest area. There are also IFR Insights courses on charts and cockpit weather, and IFR Chart Challenges for three types of instrument landing procedures. The course I took uses a variety of audio, video, and animation techniques.

I didn’t find it through the AOPA website, although that would have been easy to do. I stumbled on it while visiting the FAA site that lists 174 courses, 41 of them produced by AOPA and available for free. Another of the free courses is Instrument Proficiency Check Review Guide produced by the FAA Safety Team. There are also King Schools courses as well as those from ASA, Gleim, Sporty’s, and others. Most of those require payment. You can purchase an entire Instrument Proficiency Get It All Kit-DVD for PC course for $160 from King Schools. (It was on sale at the time this was written.)

At least a half-dozen of the answers, possibly more, that I gave during the instructor’s IPC ground review were directly from the IFR Insights course taken only a few hours earlier. A bonus from that course was a downloadable “AOPA IFR Regulations Quick Reference” that answers most of the regulation questions an instructor is likely to ask.

Taking a review course of some type means you’ll walk into the instructor’s office confident that you at least tried to prepare, and that you will indeed be getting some of the answers right. You might even pass. It’s one way to get your head into the game before taking an IPC.

Do you feel lucky?

You can get out of taking an instrument proficiency check. Once you earn that instrument rating, you can never visit an instructor again by making six approaches plus holding and tracking a course every six months, either in the air or in a qualified simulator. Failing to do that means you still have six months to make up for your error, but only in good weather. (Simulators are always in good weather.)

After that, you’ll need to pass an instrument proficiency check. Some take an IPC every year, whether they need it or not, and others, like those flying for an airline, are getting training or a proficiency check every six months. Should all pilots do that?

If you are not flying enough under instrument flight rules to maintain currency, a case could be made that maybe you should visit the instructor more often and take the IPC every six months. To misquote the movie, Dirty Harry, you’re thinking, “Do I know all instrument approach procedures?” Now to tell you the truth, in all the excitement of flying, you may have forgotten some. But being that an airplane can charge through the air at a ferocious speed, you’ve gotta ask yourself a question: “Do I feel lucky?” Well, do ya, pilot? —AKM

Instructor Courtney Johnson cites these reasons why pilots don’t get signed off on instrument proficiency checks.

Problem: Not following procedures
Solution: Absorb the information on the terminal procedure chart.

Problem: Not following checklists.
Solution: Follow them every time.

Problem: Situational awareness.
Solution: Ask yourself where you are in relation to a fix.