Get the app Get the app
News & Media Technology: iPad best practices

Making technology work for you

As the quantity and variety of flight-related information on tablets increases, the question for pilots becomes how best to employ them without becoming overwhelmed. 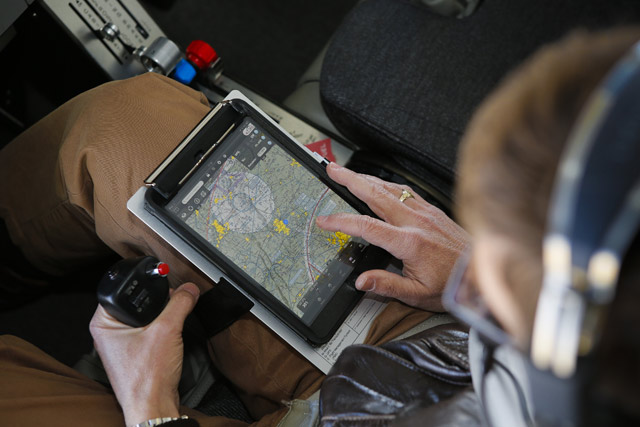 Tablet computers have quickly become essential tools for many thousands of pilots, and the technology’s almost magical ability to show weather, traffic, terrain, and synthetic vision are growing at a furious rate.

As the quantity and variety of flight-related information on tablets increases, the question for pilots becomes how best to employ them without becoming overwhelmed. How do we get the technology to work for us; decrease our workload; and avoid more button-pushing, head-down time?

“It’s critically important to preflight your iPad so that you’re all set up when you get to the airplane,” said John Zimmerman, editor in chief of Air Facts Journal, who flies with a tablet computer in aircraft ranging from a Robinson R44 helicopter to a Cessna Citation.

“You don’t want to fly with your head down, doing a bunch of data entry in flight.”

Tablet computer preparation ideally begins the night before flying with aviation apps current, charts downloaded, a full battery charge, and flight plans loaded. Also, make sure to go into your tablet’s Settings menu and turn off WiFi, Bluetooth, and other features that you may not be using in flight to preserve battery life.

In interviews with a broad cross-section of pilots who use tablet computers in both VFR and IFR flying, some “best practices” begin to emerge. For preflight planning, the tablet is the primary means of checking weather, notams, TFRs, and filing flight plans. Once pilots get to their airplanes, differences appear based on panel-mount avionics and ADS-B.

For pilots on IFR trips, the tablet is relegated to a supporting role in the cockpit and FAA-certified, panel-mount avionics take the lead. Flight plan waypoints from the tablet computer are entered (manually or via Bluetooth) to the avionics. While taxiing to the active runway, tablets are set to display geo-referenced airport diagrams that enable pilots to anticipate turns and hold-short locations.

Before takeoff, pilots should load the active approach procedure for the departure airport on their tablets so that the information is already on the screen in case an airborne emergency forces an immediate return to the airport.

At nontowered airports, or when departing in VMC on an IFR flight plan, pilots with ADS-B-equipped airplanes frequently choose to display full-screen traffic on their tablets. But if doing so, be mindful of two ADS-B limitations: First, non-ADS-B-Out equipped airplanes won’t show up as targets until your aircraft is within range of a ground station and even then most likely and accurately only if you have ADS-B Out, and the same is true for weather.—and if your aircraft is not ADS-B Out capable, you will not receive complete traffic information.(In most parts of the country, ADS-B traffic and weather are available above 1,000 feet agl.) Also, when departing in mountainous areas, the Terrain page may be the most helpful.

“An IFR departure is a busy time already,” Zimmerman said. “I tend to look at the iPad very little during this phase. It’s a quick reference at best.”

Once leveled off in cruise, IFR en route charts tend to be the most useful tablet displays, especially when they include weather and traffic overlays. En route charts are handy for reroutes and modified clearances because pilots can enter changes to flight plans quickly and see their new routes graphically. If there’s adverse weather along the route, it can be easier for pilots and ATC to avoid it by coming up with an alternate route rather than a long series of right or left deviations.

“There’s less pressure on me and ATC if I find another route on the iPad,” Zimmerman said.

Some pilots prefer displaying VFR sectional charts, even in IMC, because they show more airports and much greater topographical detail.

“I like to know what’s down there, even when I’m in the clouds,” said AOPA Editor at Large Tom Horne. “The VFR sectionals provide that much better than IFR charts.”

On approach, geo-referenced plates boost situational awareness and help pilots anticipate turns and descents. Pilots tend to use them in much the same way as traditional printed approach procedures, the difference of course being that they show aircraft position throughout. Even though approach plates are available on some panel-mount avionics, display size tends to be far smaller and harder to read with lower screen resolution than a full-sized tablet, or an iPad Mini.

“Geo-referenced approach plates are the best, most useful thing the iPad provides in the cockpit,” Horne said. “That’s the time it really shines.”

GPS-based synthetic vision is a recent addition to some tablet apps, and pilots are exploring how best to incorporate it. If flying a G1000-equipped airplane, for example, that already has synthetic vision, there’s nothing to be gained from a duplicate view on the tablet. If flying an airplane with an analog panel, however, a glance at the syn vis screen is like catching a glimpse of the airport through a break in the clouds—and that can be very helpful.

After landing, the tablet takes the lead role again with the full-screen airport diagram showing the way to parking.

Technology working for you

1. Make sure downloads are current 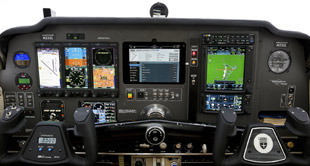 An ipad mini is at the center of the AOPA Sweepstakes Debonair’s panel —and project manager Tom Horne has incorporated it into both IFR and VFR flying. Its most useful feature, he says, is geo-referenced IFR approach procedures, which are displayed on a large screen.