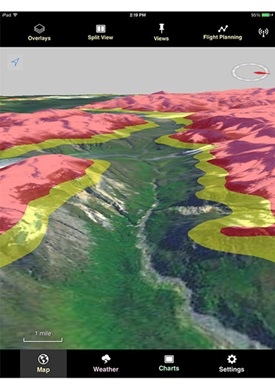 NASA has teamed up with the state of Alaska to deliver software that will allow for in-flight display of traffic, weather, and terrain on a mobile device in general aviation cockpits. The Traffic and Atmospheric Information for General Aviation system is being developed in a collaboration between state aviation officials and the aerospace agency, and the work done so far, including a concept version of the application, was formally presented to state officials Oct. 6. NASA has worked out the basics, including algorithms and data compression methods that will allow for information to be delivered via satellite and customized for the aircraft’s operating area.

Pilots operating in the vast wilderness regions of Alaska currently have very limited access to operational information in real time, and the state will now work to develop and fine-tune the software for operational use. Officials hope to have a production prototype of the software ready for GA pilots to test early in 2015. The concept version of the mobile app was tested at NASA’s Ames Research Center located at Moffett Field in California, demonstrating how satellite messaging services can be leveraged to deliver mission-critical information including current conditions in specific geographic areas.

“Each data broadcast will go only to the areas that are appropriate for those data,” said Joseph Rios, TAIGA engineer at Ames, in a NASA news release. “Once a pilot receives a data broadcast, it will be available for viewing on their iPad.”

NASA and state officials aim to use technology to help pilots make better flight decisions when disconnected from other communications and information sources. Engineers working for the state will customize the prototype with the needs of Alaska pilots in mind.

“We are excited to lend a helping hand to general aviation pilots in Alaska,” said S. Peter Worden, director of the Ames Research Center. “With the TAIGA app, Alaska pilots will be able to remain independent, but with a dose of safety when needed.”