Get the app Get the app
Already a member? Please login below for an enhanced experience. Not a member? Join today
News & Media Disruptive technology keeps Redbird on the move

Redbird Flight Simulations demonstrated four new technologies and proposed a new way to organize flight schools at its annual Migration Oct. 27 through 29 at the Redbird Skyport in San Marcos, Texas.

The fourth such event hosted by the innovative company was larger than last year with some 300 flight school owners, managers, and CFIs attending. Founder and Chief Pilot Jerry Gregoire noted that the new technologies, mostly software upgrades to the company's simulators, show that Redbird is migrating from being just a hardware company to also being a software company. Gregoire, a longtime pilot, is a former Dell Computer executive.

According to Redbird Chairman Craig Fuller, the company delivered 332 simulators over the past year, with one model or another operating in 42 countries—including more than 1,000 in the United States. Redbird, which specializes in low-cost full motion simulators, has developed disruptive technology, Fuller said. With a price point well below $100,000, the full motion simulators compete against others that cost millions of dollars. With that, even small flight schools have options not available to them previously. As is typical with disruptive technologies, it is taking a while for some schools to figure out how to take advantage of the new capabilities.

Among the new technologies demonstrated was Trace, a part of the company's GIFT (guided individual flight instruction) software package. Trace is the backbone of GIFT, which graphically lays out scenarios on the simulator's displays to help guide and coach a student through various maneuvers. Trace scores the student's performance on a maneuver based on FAA practical test standards, showing red, yellow, and green bar charts and a numerical score for various components of the exercise. For example, a student's steep turn might show a good (green) score for holding a continuous 45 degrees of bank, but the student's sloppy altitude or airspeed control might result in a yellow or red bar and corresponding poor score. Until the student progresses, Trace offers visual and voice coaching, saying "Add power," for example, if airspeed begins to decay. As the student becomes more proficient, the level of coaching is reduced.

Scarlet is a new voice-actuated control system for the simulators, allowing the instructor to use voice commands to change simulator parameters. For example, the CFI might key the mic and say, "Scarlet." "Yes," the female computer responds. "Weather," says the CFI. "What type of weather?" Scarlett inquires. "Ceiling, 1,000 feet," replies the CFI. With that, the simulated sky turns from bright blue to one showing a 1,000-foot overcast. Crosswinds, precipitation, and visibility are among the other things a CFI can command without touching a keyboard. 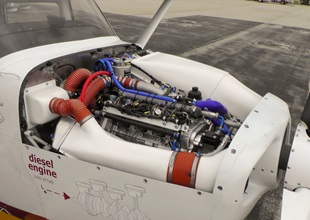 Another area where Redbird is experimenting is with its Redhawk 172 project, where it remanufacturers Cessna 172s and replaces the Lycoming avgas engines with Continental CD-155 diesel engines. Also installed is the gear to record and then transmit a series of data sets to ease aircraft and pilot paperwork. As the airplane taxis up to the flight school, it connects to a Wi-Fi signal and uploads flight time and other parameters, including the pilot's and CFI's names—which it picks up from a radio-frequency chip in the pilots' ID badge or logbook. By the time the student is inside the school, the system has sent a bill for the lesson to the accounting department, charged the student's account, completed aircraft logbook entries, and alerted maintenance to any issues with the airplane. The system taps into the full-authority digital engine controls as well as other aircraft systems to relay any high-G maneuvers or hard landings that might warrant an inspection. Depending on a flight school's desires, the system can also capture audio and video of the flight for debriefs.

Among those using the data is Brown Aviation Lease, which is setting up financing for flight schools to buy or lease the Redhawks. Schools can buy them for about $249,000 or lease them based on a usage plan. The usage plan returns higher margins to the flight school and eases cash flow, according to Jason Griswold of Brown Aviation Lease. Its lease program provides the school with essentially a flat hourly fee for the airplane, which includes all scheduled maintenance. Brown uses the reports from the aircraft data feed to predict when 100-hour inspections and oil changes are due, for example, and makes sure the parts are shipped to the school in time for the maintenance job. An operator flying 60 hours a month could expect to pay about $81 an hour for the airplane and scheduled maintenance. With Jet A fuel at $5.50 and charging a $160 hourly rental fee for the airplane, the school can expect a gross margin of 26 percent, he explained. At the Redhawk website, potential customers can estimate insurance costs and other factors to fine tune the margins.

None of the new technologies is yet ready for sale, although the company expects most of them to be available in 2015. One technology that is closer is one that puts QR codes on the airframe at key places in the preflight inspection. Using a Redbird app on a smartphone, the student can scan the codes and then watch a video that discusses the step in the inspection and highlights important things to look for in that area.

Gregoire and others from his leadership team shared their vision for Imagine Flight, essentially a new membership association for flight schools that would represent flight schools on regulatory issues and also provide them with curriculum, cooperative marketing, financing, buying discounts, and other services, some of which have been provided by Cessna to its Cessna Pilot Center network. Redbird plans to foster a guidance board to further discuss the idea early in 2015. 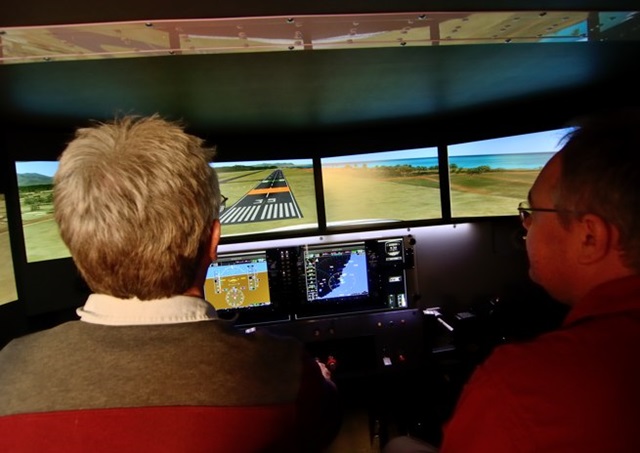 Editor in Chief
AOPA Editor in Chief Tom Haines joined AOPA in 1988. He owns and flies a Beechcraft A36 Bonanza. Since soloing at 16 and earning a private pilot certificate at 17, he has flown more than 100 models of general aviation airplanes.
Go to Thomas B Haines's Profile
Topics: Technology, Training and Safety, Flight School