Get the app Get the app
AOPA Members DO more LEARN more SAVE more - Get MORE out of being a pilot - CLICK HERE
News & Media Briefing: Our candidates in Congress

Briefing: Our candidates in Congress

Supporters of GA who deserve your vote

The idea that Congress doesn’t accomplish much isn’t new.

The idea that Congress doesn’t accomplish much isn’t new. President Harry Truman actually coined the term “do nothing Congress” more than 65 years ago when strong party divisions put a stop to many of his Fair Deal proposals. But now, as then, even the most divided Congress can get the job done when issues win bipartisan support.

Through the AOPA Political Action Committee (PAC), we provide contributions to legislators from both parties who actively demonstrate their support for general aviation by co-sponsoring legislation, writing and signing letters, giving floor speeches, hosting hearings, or taking other steps to protect our freedom to fly.

During election season the AOPA PAC receives hundreds of requests for campaign contributions, but we don’t give money to everyone who asks. We carefully weigh the evidence to separate the most reliable GA advocates from fair-weather friends. The message we send to those who receive PAC money is simple—you support GA, so GA supports you. And that support is especially critical now, as many of GA’s staunchest advocates fight tough election battles nationwide. 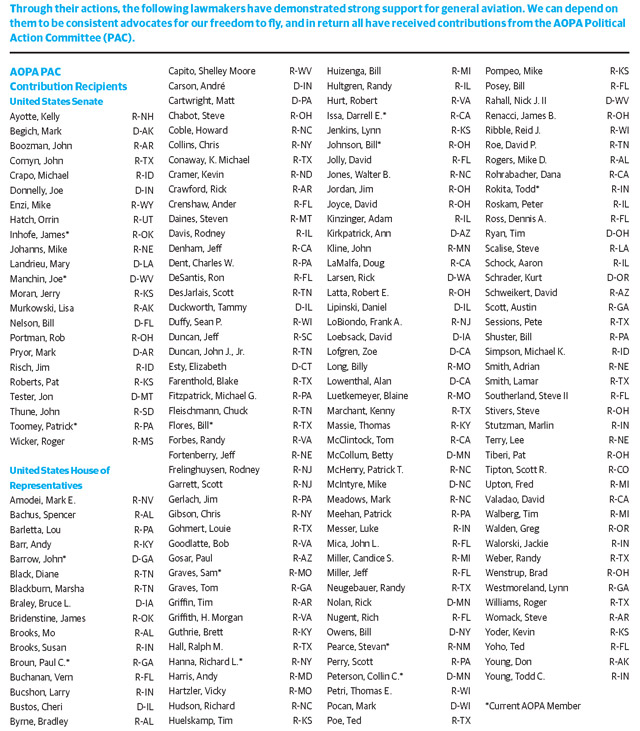 Sen. Jim Inhofe (R-Oklahoma)
As an AOPA member since 1963 and a CFI with more than 11,000 hours, Sen. Jim Inhofe knows what it takes to protect the freedom to fly. He even credits general aviation for his 1994 election win, saying flying gave him the speed and flexibility to “be everywhere” during the tough campaign.

Inhofe is a member of the Senate GA Caucus and introduced the bipartisan Pilot’s Bill of Rights in 2011. In June 2014, he announced plans to build on his earlier success with a second pilot’s Bill of Rights that will include third class medical reform and protect GA pilots from Customs and Border Protection (CBP) searches without probable cause. He has worked with AOPA to put an end to those stops and searches, repeatedly opposed user fees, and co-sponsored legislation, including the Small Airplane Revitalization Act, which was signed into law in November 2013 and sets a deadline for streamlining the aircraft certification process.

Sen. Mark Begich (D-Alaska)
No state is more dependent on GA than Alaska, and Sen. Mark Begich has made protecting and promoting GA a priority during his first term in office. He helped launch and co-chairs the Senate General Aviation Caucus. This year, Begich has been at the helm of two important pieces of legislation affecting pilots. He was one of four lead co-sponsors on a bill to stop the FAA from requiring sleep apnea testing for thousands of pilots and was an early co-sponsor of the General Aviation Pilot Protection Act designed to allow thousands of pilots to fly without requiring a third class medical certificate. He sent a letter to the FAA demanding that the agency stop dragging its feet on third class medical reform, and he has consistently opposed user fees. Begich also acted as the lead Democratic co-sponsor for the Pilot’s Bill of Rights that passed in 2012 and sits at the intersection of several powerful committees affecting AOPA’s advocacy efforts, including the Senate aviation subcommittee of the Committee on Commerce, Science, and Transportation; the Senate Appropriations Committee; and the Senate Committee on Homeland Security and Government Affairs.

Rep. Sam Graves (R-Missouri)
Growing up across from Gould Peterson Municipal Airport in Tarkio, Missouri, Rep. Sam Graves has had a passion for general aviation for as long as he can remember. Now in his seventh term in Congress, Graves serves on the House aviation subcommittee and co-chairs the House General Aviation Caucus—one of the largest bipartisan caucuses in Congress with 248 members. As an AOPA member and a multiengine- and instrument-rated commercial pilot with more than 3,000 flight hours, Graves has been called the “face of general aviation in Congress.” Whether it’s reforming the third class medical process as a lead sponsor of the General Aviation Pilot Protection Act, or confronting the Department of Homeland Security regarding zero-suspicion stops and searches of GA aircraft, Graves looks out for GA. Every time the administration suggests imposing user fees, Graves fights back. In fact, last year he gathered signatures from more than 200 members of Congress on a letter to the President opposing user fees. As a result of his leadership, Graves was the 2011 recipient of the AOPA Joseph B. “Doc” Hartranft Jr. Award—one of the association’s two highest honors.

Rep. John Barrow (D-Georgia)
Rep. John Barrow, an AOPA member since 2006, is the Democratic co-chair of the House General Aviation Caucus and a dependable opponent of user fees, which he says would amount to giving the FAA a blank check. Barrow co-sponsored bills to reform the third class medical certificate and prevent the FAA from unilaterally requiring thousands of pilots to undergo sleep apnea testing. He also co-sponsored the Small Aircraft Revitalization Act of 2013, which sets a deadline for streamlining aircraft certification. He is a member of the powerful House Energy and Commerce Committee, which has jurisdiction over environmental issues such as aviation gasoline emissions. For his work, Barrow is the most recent recipient of the AOPA Joseph B. “Doc” Hartranft Jr. Award.

Rep. Todd Rokita (R-Indiana)
While serving only his second term in Congress, Rep. Todd Rokita is already making a splash as a strong advocate for general aviation. Like most AOPA members, Rokita was frustrated with the FAA’s failure to respond to the AOPA-EAA third class medical petition. Working with AOPA and the GA community, Rokita introduced the General Aviation Pilot Protection Act to allow thousands more pilots to fly without the need for a third class medical certificate. The bill has gathered strong bipartisan support and led the FAA to announce that it will issue a rulemaking. Rokita is a member of the House GA Caucus and serves on the House Budget Committee, where he is quick to oppose user fees on general aviation. He has also stood firm against the President’s plan to alter the depreciation schedule for noncommercial aircraft.

Rokita began flying in a Cessna 152 when he was just 17. Today, he volunteers with Veterans Airlift Command, providing free air transportation to wounded soldiers.

Rep. Dan Lipinski (D-Illinois)
As one of the more senior Democratic members of the House aviation subcommittee, Rep. Dan Lipinski was a lead co-sponsor of a bill to prevent the FAA from unilaterally requiring thousands of pilots to undergo sleep apnea testing and a co-sponsor of the General Aviation Pilot Protection Act to allow more pilots to fly without a third class medical certificate. In the past year, Lipinski has worked with AOPA to protect the civil liberties of pilots and put an end to the stops and searches of GA aircraft without probable cause. Lipinski asked the Homeland Security appropriations subcommittee to include language about CBP law enforcement actions in the Department of Homeland Security spending bill for fiscal year 2015. His request was incorporated and the bill was approved by the House Appropriations Committee. Lipinski was also the lead Democratic co-sponsor on the Pilot’s Bill of Rights, designed to give aviators more protection and access to information during FAA enforcement actions.