Get the app Get the app
Already a member? Please login below for an enhanced experience. Not a member? Join today
News & Media Briefing: Savings in the states

Briefing: Savings in the states

Over the past two years, AOPA has been able to actively save members who own their own aircraft an average of $179.22 per year. 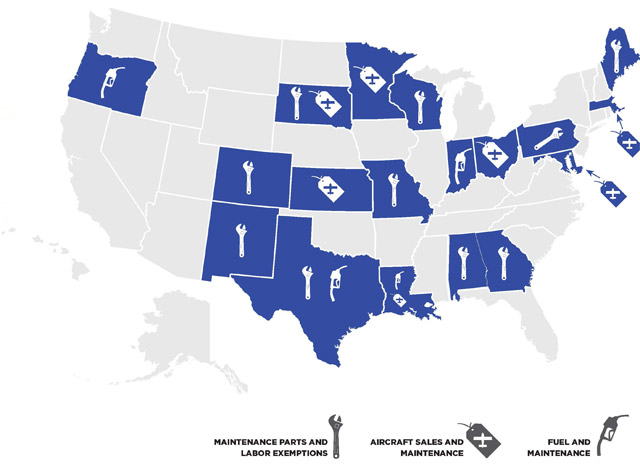 *Unless otherwise stated, estimated savings based on flying a Cessna 182, Piper Cherokee, or Beech Bonanza approximately 105 hours each year with base maintenance costs of $3,000 per year.

Over the past two years, AOPA has been able to actively save members who own their own aircraft an average of $179.22 per year by promoting legislation to create tax exemptions and cuts, while opposing legislation that would increase taxes and fees on pilots. Renters save, too. In 2014, 46 state legislatures were in session, and AOPA reviewed and monitored hundreds of bills passing through every one of those state legislatures, on the lookout for measures with the potential to affect general aviation, either directly or indirectly. When we found a bill that could help or harm GA, we jumped in, fighting to protect your freedom to fly, educating lawmakers about the consequences of their decisions, and promoting legislation that makes it easier and more affordable to take to the air. Take a look at this sampling of states where we’ve made a difference in just 2013 and 2014, and see how much some of these measures are saving* pilots right now. 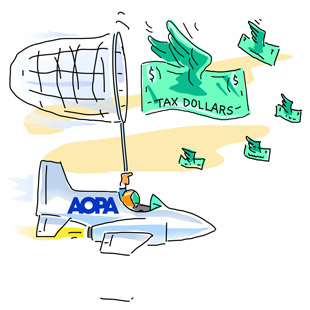 Missouri—AOPA works with the Missouri Pilots Association and members in the state to champion legislation that prevents a state sales tax exemption on aircraft parts and materials from expiring. The measure is signed into law in July 2014, ensuring members won’t have to pay the tax—ranging from 4.225 percent to 9.6 percent. Estimated member savings: $127 to $288 each year.

Indiana—AOPA advocates for legislation that eliminates the 7-percent sales tax on aviation fuel and maintenance at Part 145 maintenance shops, lowering the price of fuel up to 50 cents per gallon. AOPA persuades legislators to expand the sales tax exemption on aircraft repair and maintenance to everyone. Estimated member savings: $210 annually.

Alabama—AOPA champions a law that provides a use-tax exemption equivalent to the 4-percent sales tax on parts, components, and systems used in the reconfiguration or maintenance of certain aircraft. Estimated member savings: $120 annually.

Kansas—AOPA supports a measure that adds homebuilt aircraft to an existing sales tax exemption for antique aircraft. Estimated member savings: $1,032 based on an average tax collection rate of 1.29 percent and an all-inclusive kit price of $80,000.

Massachusetts—AOPA helps stop two pieces of legislation that would have raised taxes on aircraft owners. One bill would have placed a 6.25-percent sales tax on aircraft and the other would have placed the same tax on hangar and maintenance costs. Both bills are defeated. Estimated member savings: $5,937 in taxes on a 1978 Cessna 182 purchased for $95,000, plus $187 annually on hangar and maintenance costs.

Ohio—AOPA successfully fights to have provisions that would increase taxes on aircraft rentals, charter providers, and others removed from a bill dealing with the state’s sales tax.

Oregon—AOPA’s efforts stop a bill to raise the state’s tax on avgas by 2 cents per gallon.

Pennsylvania—When property tax legislation mistakenly includes a 6-percent sales and use tax on aircraft parts and maintenance, AOPA contacts the bill’s sponsor, and the error is corrected. Estimated member savings: $180 per year.

Colorado—AOPA works closely with the Colorado Airport Operators Association to expand the state’s tax credit of $1,200 per new employee enjoyed by aircraft manufacturers to include maintenance, repair, and overhaul businesses.

Louisiana—AOPA helps stop three different bills that would have raised taxes on aviators. The first would have required an annual adjustment tied to the consumer price index on the tax levied on avgas. The second would have imposed state taxes on antique airplanes and personal property taxes on privately owned aircraft weighing less than 6,000 pounds. And the third would have allowed the state to charge sales and use taxes on the purchase of fuels now subject to state excise tax.

South Dakota—AOPA works with lawmakers to stop pilots flying homebuilts from paying the state’s 4-percent sales tax twice—first on the individual parts for the aircraft, then again as a registration fee based on the value of the completed aircraft. Now homebuilders can save their receipts and be exempted from the 4-percent registration fee. Estimated member savings: $3,200 on an $80,000 kit.

Maine—By winning an extension to an exemption from the 5.5-percent sales tax on aircraft sales, parts, and maintenance until 2033, AOPA helps keep costs down and business in the state. Estimated member savings: $165 per year for another 19 years.

Maryland—For the third straight session, AOPA vigorously opposes legislation that would have imposed a luxury surcharge on the retail sale of aircraft sold for more than $50,000, and the legislation fails—again.

Texas—AOPA supports legislation that allows agricultural aircraft operations to exclude the cost of labor, equipment, fuel, and materials used to provide those services from its total revenue.

AOPA Advocacy efforts across the United States are ongoing. For more information and to learn what is happening in your state, visit the website.