Get the app Get the app
AOPA Members DO more LEARN more SAVE more - Get MORE out of being a pilot - CLICK HERE
News & Media Membership News & Notes: ‘Loud and clear,’ says Huerta

The FAA has sent a proposal to reform the third class medical certification process to the Department of Transportation (USDOT) for review, according to FAA Administrator Michael Huerta. The FAA has sent a proposal to reform the third class medical certification process to the Department of Transportation (USDOT) for review, according to FAA Administrator Michael Huerta. Huerta said the FAA has heard the general aviation community “loud and clear” on the need for reform. The proposed rulemaking must be vetted by both the USDOT and the White House Office of Management and Budget before details can be revealed and opened for public comment.

Meanwhile, AOPA continue its work with Congress on moving the General Aviation Pilot Protection Act (GAPPA) forward. It had 129 House and 17 Senate co-sponsors when Congress began its summer home work period. AOPA advocacy staff continues to leverage every available opportunity to keep pressure on the FAA and will not let up until rulemaking is completed or the legislation is signed into law. “While we acknowledge that rulemaking is moving through the normal FAA process, the path toward reform has been far too slow,” AOPA President Mark Baker said. “We have 10 years of data proving that pilots can fly safely without going through the costly and time-consuming process of getting a third class medical certificate. AOPA will continue working closely with Congress to keep up the pressure and get this done. This issue is too important to our members and the entire aviation community to let it get bogged down in bureaucracy.”

To support AOPA’s efforts, send a messageto Congress by visiting our webpage. 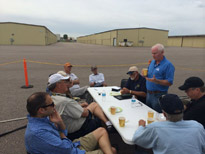 These active volunteers have played key roles on critical issues in their communities, and made use of the ASN program as a resource to help promote and protect their airports. 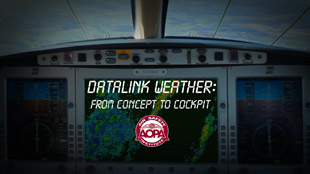 Individual initiative—the sometimes unintended consequences of scientific research, timing, and the power of a good idea—have played a critical role in the development of an important technological innovation within the past 10 years called datalink weather. Datalink hasn’t made severe weather any less dangerous, but it has improved situational awareness in the cockpit.

“Datalink Weather: From Concept to Cockpit” is the story of how that technology came to be, told by some of the people directly involved in its creation. It’s not a story of one person working alone on a wholly new idea, but several different individuals working separately, and at different times, contributing their own pieces to the practical realization of an idea that had been around since the World War II era.

The documentary includes interviews with Norman Crabill, a former NASA engineer who took critical steps in creating the technology involved; Keith Hoffler, who worked with Crabill to bring one of the first systems to market; Bob Baron (WxWorx XM weather), whose company played a major role in bringing datalink to a mass audience; Dr. David Strahle, an early advocate of the idea and a noted educator/speaker on the topic; and AOPA Pilot Editor in Chief Thomas B. Haines. Watch the approximately 27-minute video online (www.airsafety
institute.org/datalinkdocumentary).

The Joseph T. Nall Report is the Air Safety Institute’s annual review of general aviation accidents. It is dedicated to the memory of Joe Nall, a NTSB member who died as a passenger in an airplane accident in Caracas, Venezuela, in 1989.

The twenty-third annual Nall Report offers detailed analysis of general aviation accidents during 2011, a year that in many ways looked a lot like 2010. The report classifies accidents by type of operation, flight condition, pilot certificate level, and aircraft class/category, and it includes graphs for a quick visual overview and a comprehensive analysis explaining them.

Many of the case studies share a common element: the willingness of the pilots involved to take passengers on flights that they knew, or certainly should have known, would test the limits of their capabilities.

This year’s scorecard accompanying the twenty-third annual Joseph T. Nall Report provides a quick summary of the numbers of accidents, fatal accidents, and fatalities during the past two years. After spiking in 2011, the number of commercial fixed-wing accidents returned to near-record lows, while noncommercial helicopter flight accidents jumped in 2012 but dropped again the following year. The number of commercial helicopter accidents continued a gradual increase—while after a modest improvement in 2012, the number of noncommercial fixed-wing accidents dropped nearly 20 percent to its lowest level in decades. 2013 saw 361 individual fatalities in helicopters and light airplanes, the fewest in more than 50 years.

FAR 61.113(c) dictates how we may share the cost of flying with passengers. The regulation says that a private pilot may not pay less than the pro rata share of the operating expenses of a flight with passengers, provided the expenses involve only fuel, oil, airport expenditures, or rental fees. Pro rata means to divide or share proportionately. So, if you’re carrying three passengers, then you, as the pilot, are obliged to pay at least 25 percent of the allowable expenses. If you pay less than 25 percent and the FAA finds out, it could assert that you are piloting an aircraft for compensation or hire, and pursue action against your certificate.

Renting pilots are permitted to share the rental fee plus the cost of fuel, oil, and airport expenditures. Other fixed costs such as insurance, maintenance, and tiedown are generally built into rental fees; owners absorb these costs as part of ownership and may not use those costs to calculate the operating costs being shared.

The FAA maintains that the pilot and passengers must have a “common purpose” in order to share costs. In a 2011 chief counsel opinion, the FAA stated that the existence of a bona fide common purpose is determined on a case-by-case basis. It says that if a pilot and passengers have a common destination, then that satisfies the common purpose test—so long has the pilot picks the destination. In other words, if you’re flying to New York to attend a wedding and a few friends want to tag along and go to a baseball game, it’s OK to share costs. It would likely not be OK if your friends ask you to take them to New York for a wedding and you justify the trip by deciding to take in a game while you’re there.

Mike Yodice counsels legal service plan/pilot protection services members on such issues as FAA compliance and enforcement. He is an active pilot and regularly flies a Piper J–3 Cub and Cherokee 180.

AOPA Insurance Services is partnering with Liberty Mutual to provide members with a valuable auto and home insurance benefit program. This addition rounds out AOPA’s robust offerings that include aircraft owner’s, renter’s, term life, and AD&D insurance, plus a travel assistance program. As an AOPA member, you receive exclusive savings on your auto and home insurance on top of Liberty Mutual’s competitive rates.*  Save even more on your home insurance when you insure both your car and home. Additional discounts are available based on your driving experience, car and home safety features, and more.

*Discounts and savings are available where state laws and regulations allow, and may vary by state. To the extent permitted by law, applicants are individually underwritten; not all applicants may qualify.