Get the app Get the app
News & Media Never Again: The perfect weekend kickoff

Unwelcome guests in the pitot tube

At 550 feet I was still focused on the runway and yaw control when the wheels left the ground. A quick glance at oil pressure and then airspeed—no airspeed! Yet the airplane was surging upward and accelerating forward. 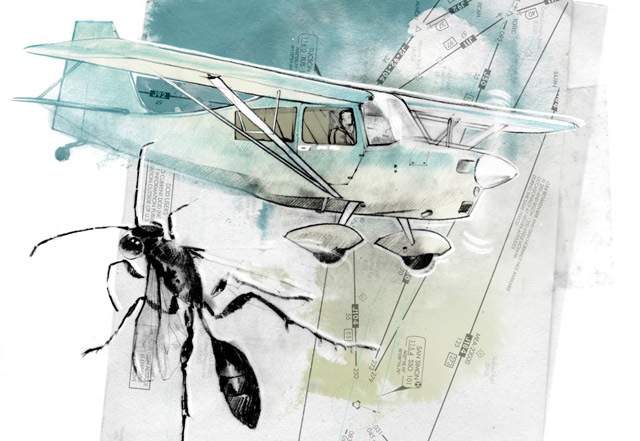 Half fuel, no passenger, and an early morning departure meant this flight would be the perfect weekend kickoff. Under a light load my Super Decathlon would climb eagerly through cool air and respond crisply to stick and pedal inputs while carving rolls, loops, Cuban eights, and hammerheads into the porcelain blue desert sky over Tucson, Arizona. What better way to melt away a week’s worth of work stress?

With ground checks and runup completed, I double-checked the approach for landing traffic, announced my intent, and rolled over the threshold of Runway 19. Next came stick to neutral and throttle forward to a slow count of five, then a slight push to get the tail up while still countering the seesaw of torque with my feet. It typically takes 625 feet or so to get off the ground at my home airport, but not with this light load and cool air. At 550 feet I was still focused on the runway and yaw control when the wheels left the ground. A quick glance at oil pressure and then airspeed—no airspeed! Yet the airplane was surging upward and accelerating forward. I remember thinking, Should I cut the throttle and bring it back down? I’m 40 feet off...no, 60. The far end was fast approaching, and I decided not to test my short-field ability on what was left. I was committed.

My first impulse was to fly the traffic pattern and land immediately. On second thought, I didn’t really know what was happening with the airplane, and sorting things out before attempting to land without an airspeed indicator seemed the safer alternative. With the nose a little lower than usual, I continued on and up. By now the airspeed needle was moving erratically and bouncing around 40 mph. Yet the stall horn was silent, and stick response was agile—plenty of airspeed to continue a safe climb.

It must be water in the pitot static system. I had given her a bath after my last flight, and I had forgotten to tape over the pitot tube and static ports when I washed the airplane.

The vertical speed indicator displayed a climb of 850 feet per minute, and the altimeter showed nearly 3,800 feet and climbing. That seemed about right. The airport elevation is 2,940 feet, and the sight outside my side window looked to be approaching pattern altitude.

It was time to think of the bigger picture and not just the erratic gauge. At 6,500 feet msl I leveled off. To my surprise the erratic airspeed indicator smoothed out to 120 mph. Could it be working now? Maybe the water had blown out.

Since the erratic behavior was in the climbout, what would happen in a dive? I pushed the nose down. The airspeed indicator showed a decrease in airspeed, yet the wind noise was increasing. I pulled up into a climb. The indicator showed an implausible increase in airspeed as the airplane slowed in the climb. I leveled off again. Perhaps the water was just blocking the pitot tube, and the static ports were fine. Would that cause a reverse trending in the airspeed indicator?

Perhaps I could use the portable GPS to help determine airspeed well enough for a safe approach and landing. It read 135 knots groundspeed; however, all of the V-speeds I have memorized for my airplane are in mph, since that’s how the pilot’s operating handbook and the airspeed indicator express speed. Let’s see, 10 percent of 135 is 13.5. Add half that much again to get 15 percent; that’s about 20 mph, added to 135 is 155 mph groundspeed. That’s faster than my airplane cruises, so I had a tailwind.

“Isn’t there a way to get this GPS to read in mph?” I muttered. I started to scroll through menus when it occurred to me that, even if I could get the thing to display in mph, there was no way I would trust it to give speed with split-second accuracy on short final because I had no idea how quickly it could calculate and update speed. I was going to have to get my head outside of the cockpit and fly the approach by sight, sound, and feel.

I announced my intent, descended, and entered the downwind for Runway 19. Once abeam the numbers: throttle back, prop control forward, mixture rich, and then a coordinated turn to base. The air hissed softly around the cowling and along the fuselage. It sounded about right, and the stick and rudder were plenty responsive. The weather robot had announced an eight-knot crosswind, and the wind sock agreed as I turned on final. With a bank into the wind and cross-control using rudder, I rounded out, sighted to the far end, and glided to an uneventful touchdown with a modest bounce.

The next day my A&P made a hangar call to tear down, dry out, and check the pitot static system. As is turns out, there was no water in the system—mud daubers had made a home in my pitot tube. What’s a mud dauber? It’s a small black wasp with an impossibly thin waist, and it builds its home with mud—in tiny cracks and openings like pitot tubes.

Now when my airplane is parked, it sports a red-flagged pitot cover, and I give the airspeed indicator a quick glance before the wheels get off. I also know how to get my GPS to read in miles per hour, and I’ve cracked the books to relearn that airspeed indicators tend to reverse trend when just the pitot is blocked. Just for good measure, I store a roll of red tape on the long handle of the brush I use to wash my little white beauty.

Tom Fournier and his wife, Betty, enjoy an aviator lifestyle at La Cholla Airpark in Arizona. He has earned degrees in engineering, business, and philosophy, and has published papers in those fields.