Get the app Get the app
Already a member? Please login below for an enhanced experience. Not a member? Join today
News & Media P&E Technology: Smarter smartphone photos

How to enhance your aerial images

The smartphones that have become our constant flying companions also are fairly sophisticated still and video cameras. 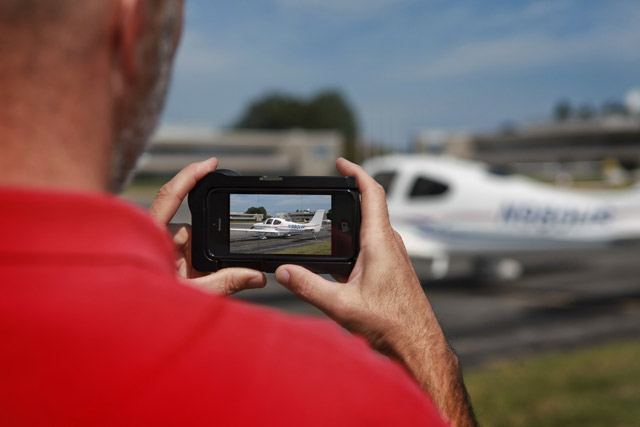 The smartphones that have become our constant flying companions also are fairly sophisticated still and video cameras. So why are so many of the images we make (and post) so horrendous?

AOPA Photographer Chris Rose has some helpful hints about getting the best aviation images from these multifaceted gadgets.

“There’s an old saying that the best camera is the one you happen to have with you, and by that measure the iPhone is a great camera,” Rose said. “I have mine with me just about all the time, and about 85 percent of my personal photography these days is done on it—even though I have access to a full complement of much more sophisticated digital SLR cameras.”

The most common photographic error people make is holding camera phones in one outstretched hand. “Treat it like a real camera,” Rose said. “Hold it with two hands, close to your body, for greater stability.”

When photographing propeller aircraft with engines running, do so in a way that reduces the prominence of the propeller. The camera phone’s rolling shutter tends to contort propeller images in wildly distracting ways, especially in bright sunlight.

Take note of the condition of your camera lens, too. Lenses easily can get smudged or dirty, and that distorts images. “It’s easy to get fingerprints or pocket lint on lenses,” Rose said. “People ruin a lot of potentially good images that way.”

Pushing the shutter button at exactly the right moment is nearly impossible because of built-in delays. Simply holding down the shutter button on an iPhone, however, results in a quick burst of images just like using a motor drive on a traditional camera.

Most camera phones give the operator the option of showing a grid pattern on the viewfinder, and that can be instructive. “That grid can be helpful in composing your shots,” Rose said.

Smartphone cameras tend to be less susceptible to electronic interference in Airplane mode, too.

For iPhone users, the coming iOS 8 promises to allow application developers to offer more camera-like features such as the ability to control shutter speeds, and that can go a long way towards eliminating prop distortion.

There are relatively inexpensive accessories such as the iPro Lens System that offers wide-angle, macro, and telephoto lenses for the iPhone ($299 retail); and the mCamLite video system provides a plug-in microphone, lens, and camera holder ($130). For cockpit use, NFlightcam offers headset jack adapters that plug directly into the aircraft audio system to digitally record radio and intercom transmissions.

So what can pilots do with these new tools? The list is long.

Flight instructors already are recording in-cockpit videos of flight lessons, editing them on the smartphone screen, and sending clips to their students to review and learn from. Instrument pilots record approaches, and social media is full of takeoffs and landings, sunset flights, and visual landmarks.

Pilots can post the images directly to social media, or store and/or share them through electronic logbooks and aviation websites.

At AOPA, iPhone images are staples on AOPA.org, and they sometimes appear in AOPA Pilot and Flight Training in weather and product stories and technique videos. Smartphone images often are the first pictures web-surfing pilots see from airshows such as EAA AirVenture and Sun ’n Fun.

National Geographic estimates that professional and amateur photographers in the United States will create more than 100 billion digital images in the next 12 months, and Facebook already holds tens of thousands of times more images than the Library of Congress.

“The cameras in our phones and the apps designed for them are going to continue getting better and better,” Rose said. “There are some inherent limitations in optics and image sensors in any product that small. But the fact that these cameras are with us all the time means their presence makes up for a lot of their technical shortcomings.”

Since the vast majority of today’s images are created digitally and viewed online, smartphones are the ideal vehicle for making and sharing them.

“If your smartphone is going to be your primary camera, you might want to look to add-on lenses and post-production editing software to expand your creativity and make your photos look better,” Rose said. “Expectations are changing, and the days of sharing high-resolution, eight-by-10 prints are gone.”