Who wrote, “If you would measure the heartbeat of a city, take the pulse of its airport?” 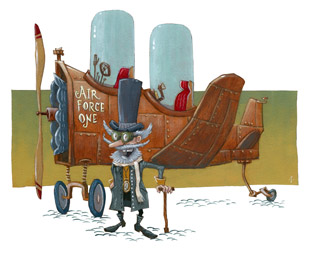 1. Who wrote, “If you would measure the heartbeat of a city, take the pulse of its airport?”

3. From reader Rob Spencer: An airplane can be placed into a zero-G (or “weightless”) condition by moving the control wheel (or stick) aggressively forward. Performing this maneuver is required in some aircraft and prohibited in others. What are these other aircraft? Explain the requirement and the prohibition?

4. With respect to the following categories, what jetliner was first to be placed in service?

5. The original air-mail route across the United States was developed by Eddie Rickenbacker and Bert Acosta in 1924. The cost of mailing a 1-ounce letter from coast to coast was 24 cents. The westbound route began in New York and included 14 stops. How many can you name?

6. True or False? A pilot flying over a large lake is approaching a sailboat in the middle of the lake. It is legal for him to fly 400 feet abeam the boat at an altitude of 400 feet agl.

7. What was the first airplane to be assigned the call sign, Air Force One, and who was the U.S. president at the time?

8. A pilot initiates a normal glide at 10,000 feet msl on a windless day and maintains the published (best) glide speed throughout the descent. As altitude decreases, rate of descent _______, and glide angle (or ratio) _______.

1. (d) Gen. Mitchell was a famous and controversial champion of American air power and an outspoken advocate of aviation in general.

3. Glider pilots must push over into a zero-G condition if the cable breaks during a winch launch. The nose is so high at such a time that pushing over abruptly is required to prevent stalling. Gyroplane pilots must avoid zero-G because this would stop air from flowing up through the rotor disc and remove the force that keeps the blades spinning.

6. True. According to the regulations, an aircraft flying over water or sparsely populated areas “may not be operated closer than 500 feet to any person, vessel, vehicle, or structure.” In this case, the airplane is 566 feet (diagonally) from the sailboat.

7. In 1953 and during President Dwight D. Eisenhower’s administration, a Lockheed C–121 Constellation named Columbine II was first to be called Air Force One.