Get the app Get the app
News & Media AOPA Homecoming Fly-in: Frederick, MD

Welcome back to AOPA headquarters for the sixth 2014 regional fly-in at Frederick Municipal Airport (FDK). 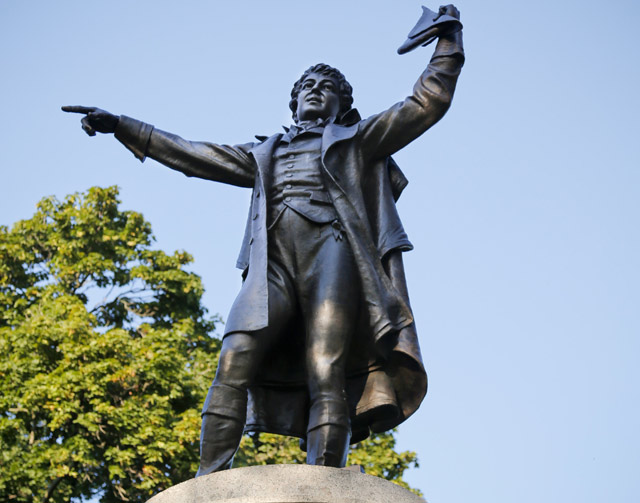 Welcome back to AOPA headquarters for the sixth 2014 regional fly-in at Frederick Municipal Airport (FDK). AOPA’s rich 75-year history includes its annual fly-in, which returns this year for members to enjoy the historic Civil War Maryland town, home of the author of The Star-Spangled Banner and a vibrant general aviation airport, on October 4, 2014.

A variety of events and activities will be available for AOPA members, pilots, and aviation enthusiasts. 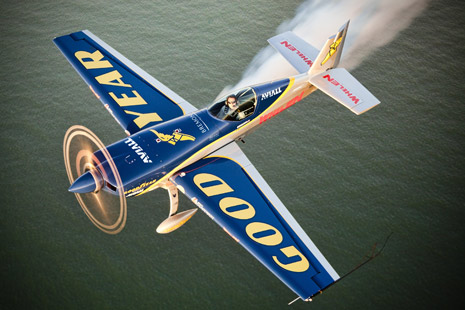 Maryland’s Frederick Municipal Airport (FDK) will host a modern-day airshow star, a World War II bomber, and timeless safety lessons at the AOPA Homecoming Fly-In October 4. For pilots who stay for the weekend, the airport also provides access to a wealth of American history.

As a border county in a border state, Frederick County saw both Union and Confederate troops travel through several times during the Civil War. Becky Bickerton, director of sales and marketing at the Tourism Council of Frederick County, said the area’s Civil War heritage draws a lot of travelers from out of town. The sites of the Battle of Antietam, known as the bloodiest single-day battle in American history—and the Battle of Gettysburg, a turning point in the war—are only a short drive away. At Monocacy National Battlefield in Frederick, outnumbered Union troops held off a Confederate advance toward Washington, D.C., long enough for reinforcements to arrive at the capital.

Frederick itself became one vast hospital during the war. After the battles of South Mountain and Antietam, the population of the city more than doubled with wounded and sick soldiers. The National Museum of Civil War Medicine in downtown Frederick tells the story of emerging modern medicine and challenges popular myths of soldiers “biting the bullet” because they had no anesthesia. Find authentic artifacts at the museum, including an original ration of hardtack.

Visitors who want to wash down their history with a local brew can try one in a series of Civil War-themed beers produced from a joint project between the National Museum of Civil War Medicine and the Brewer’s Alley brewpub. One can choose from some 50 places to eat downtown, with a wide variety of food choices and price points, said Kara Norman, executive director of the Downtown Frederick Partnership. The historic downtown attracts visitors with beautiful architecture, great food, and great shopping, she said. According to the most recent data, about 11,000 people come to town for First Saturday, when shops stay open late and the downtown area comes alive with live music and more. AOPA’s Homecoming Fly-In takes place on a First Saturday, so reservations are recommended if you decide to eat downtown.

While attendees at the AOPA Homecoming Fly-In October 4 chow down on lunch from a wide variety of gourmet food trucks, they should be sure to keep their eyes on the sky for a special treat: an aerobatic demonstration from airshow star Michael Goulian.

Members can experience a tribute to the Greatest Generation with a flight in EAA’s B–17G Flying Fortress Aluminum Overcast. EAA is selling rides on its website (www.eaa.org/en/eaa/flight-experiences) and will offer tours of the aircraft during the Frederick event.

Mark Baker, AOPA President and CEO
Pilot Town Hall
Mark took office as AOPA’s fifth president in 2013. An accomplished general aviation pilot, he began flying at the age of 16. He has owned numerous aircraft over the years, including a Beech 18 on floats. A native of Minnesota, he is an avid seaplane pilot. He has more than 7,500 hours and holds multiple ratings.

Kristine Hartzell, Chief Flight Instructor, Air Safety Institute
“What Went Wrong? Accident Case Study Live”
Kristine is an ATP, CFI, CFII, and MEI and has worked as an instructor and/or check airman throughout her career in Part 61, 141, 121, and 135 operations. She has been an active flight instructor since 1994 and is the mother of two.

Rod Machado, AOPA’s National CFI Spokesman
“Thinking Small to Avoid Big Mistakes”
Rod is on a one-man mission to keep the fun in learning. Rod wrote and co-anchored ABC’s Wide World of Flying. He is a columnist for AOPA Pilot and Flight Training and is the flight instructor on Microsoft Flight Simulator. His recent book is How to Fly an Airplane Handbook.

Dr. Jonathan Sackier, AOPA Medical Counsel
“Live for Flying? Fly for Life”
Jonathan trained as a surgeon, has been flying for years, serves as medical cousel for AOPA, and writes the AOPA Pilot column “Fly Well.” He is passionate about patient empowerment and helps members through AOPA’s Pilot Protection Services plan.

Thomas B. Haines, AOPA Senior Vice President, Editor in Chief
“ADS-B: Equip Now?”
Tom will moderate a panel of speakers from the FAA, AOPA, and GAMA who will discuss when and how general aviation pilots should equip with ADS-B in advance of the 2020 mandate. The panelists will address questions regarding the ADS-B initiative and how it affects GA pilots. Tom is an active multi-rated pilot who owns a Bonanza A36.

Jim Johnston, FAA Manager, National Capital Area Region
“Capital Skies: Understanding the Washington, D.C., Airspace”
Take a behind-the-scenes look with the people who guard the Washington, D.C., airspace and understand how to navigate the area safely and confidently. Jim will lead a panel discussion with members of the Department of Defense, Potomac Tracon, and others.

10 THINGS TO DO IN the area

1 Battlefields. Visit the sites of major civil war battles in Gettysburg, Pennsylvania, and Antietam, Maryland, or “the battle that saved Washington” at Monocacy National Battlefield in Frederick.

4 Hiking and biking. It’s a short drive to the Chesapeake & Ohio Canal trail along the Potomac River or to Catoctin Mountain Park to the north.

6 Libations. Beer connoisseurs can check out the offerings of local breweries Flying Dog Brewery and Monocacy Brewing Co. Oenophiles can choose from a number of nearby wineries.

9 National Aquarium. Peek into the aquatic world of the clown triggerfish or bonnethead shark at this Baltimore attraction.

10 Harpers Ferry, West Virginia. At the confluence of the Potomac and Shenandoah rivers, this quaint community is as scenic from the air as it is on the ground. 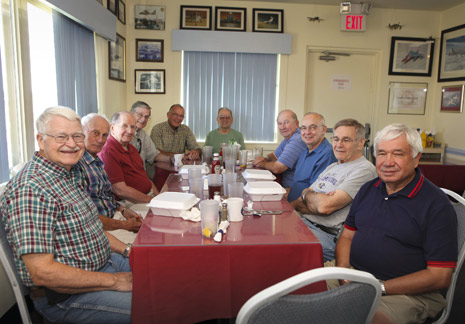 The walls of Airways Inn tell the story of its patrons: Posters from past airshows, signed pictures of the Goodyear Blimp and the 1st Helicopter Squadron, a mission patch from astronauts who had dropped by. The airport café in Frederick, Maryland, is like a family, says owner Jenny Sewell, who has run the restaurant for about 12 years. Locals come to watch the airplanes from the windows or get together and tell stories; many come back three or four times a week, she said.

“Most of my customers are regulars,” Sewell said. One such group of regulars has been coming back week after week for some three decades. “We call them ‘air heads,’” she joked.

Dick Bernstein was one of the original, card-carrying members of that group, a get-together officially named “Stransky Nights” for its founder, an airport regular who loved to tell stories and developed a following. Even after George Stransky moved away, the get-together continued, Bernstein said. Sometimes only a handful of people turn out now; other times there are 15 or more. “It’s a live thing,” said Bernstein. “It grows and contracts.”

On a quiet summer evening, attendees listed the food that helps keep them coming back: prime rib that “can be absolutely out of this world,” Maryland crab and cream of crab soup, and what one attendee calls “the best chicken noodle soup I’ve had in my entire life.”

The Stransky Nights crew meets on Fridays, but, said longtime group member Rodney Martz, “We practice on Wednesdays.” Many groups come back on Sunday mornings, too. “It’s either my home or my second home,” said Preston Burch, who returned to Airways Inn for dinner after a late lunch. “This is my country club.”

• Take the course, know the airspace. Pilots flying VFR within 60 nm of the DCA VOR/DME must take an online course through the FAA Safety Team (faasafety.gov). FDK sits between the Washington, D.C., Special Flight Rules Area to the south and prohibited area P-40 over Camp David to the north.

• Check notams and read the AOPA flight procedures. When the president is at Camp David, P-40 is expanded with a 10-nm TFR. Airspace restrictions can change on short notice.

• Submit fuel requests early. Marshalers will direct you to parking. If you need fuel, submit your requests once you’ve parked to give Landmark Aviation staff time to fuel your aircraft before you depart. 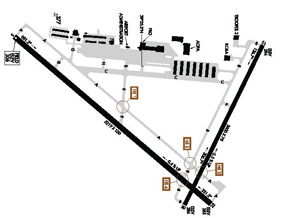 • Taxi with care. Taxiways have been renamed since the tower opened in 2012, so stay alert and pay close attention to new signage.