Preserving general aviation for all

As AOPA’s longest serving board member, R. Anderson “Andy” Pew has helped guide the organization through times of tailwinds and turbulence. 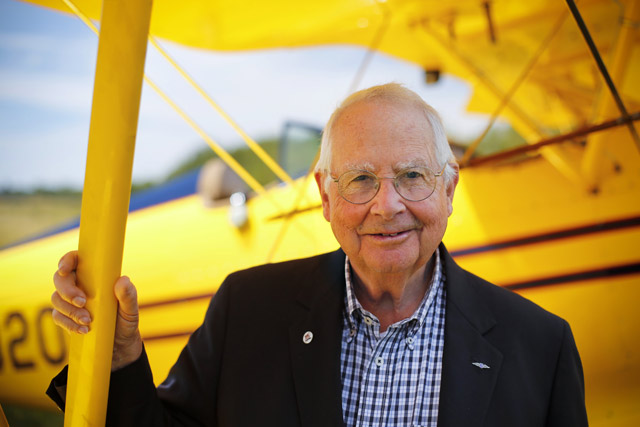 As AOPA’s longest serving board member, R. Anderson “Andy” Pew has helped guide the organization through times of tailwinds and turbulence.

After 44 years on the AOPA board, Pew is stepping back from the time-consuming volunteer position, but he will continue serving as trustee emeritus and offering his expertise in the clear-eyed, candid, and purposeful manner those around him have come to expect.

“My service on the board has been based on my desire to help and preserve general aviation,” said Pew, 78, an instrument-rated pilot who still owns and flies the Piper Comanche he bought new in 1965. “Sometimes we’ve had to slug it out. I’ve seen enough aborted regulation attempts that AOPA has stopped over the years to know that GA would have a fraction of the utility it enjoys today without the association’s efforts.”

Pew joined AOPA in 1956 at the insistence of a flight instructor at the Princeton Airport in New Jersey. “I had never heard of AOPA,” he said. “But my instructor wouldn’t allow me to solo until I signed up. He told me that all I needed to know about AOPA was that it was the organization that would keep me flying.” The instructor couldn’t have known how right he was.

In 1970, then-AOPA-chairman Laurence P. Sharples invited Pew to breakfast at his Philadelphia-area home for a frank talk. Sharples, one of AOPA’s 1939 founders, told Pew he wanted the younger man to replace him as AOPA chairman. When Pew said he wasn’t sure he was qualified, Sharples gruffly dismissed Pew’s resistance. “You’ll figure it out,” Sharples told him, his mind already made up.

Pew played a role in selecting AOPA presidents John Baker, Phil Boyer, Craig Fuller, and Mark Baker, and he said the board sought different strengths in each leader. In John Baker, the organization sought credibility from a scrappy former fighter pilot who was then an FAA deputy administrator. In Boyer, the board wanted a bottom-line-oriented media executive who could expand membership. In Fuller, the board looked for a Washington insider who could build a powerful coalition on Capitol Hill. In Mark Baker, the board recruited a proven business leader who won’t hesitate to make hard choices. “Our CEOs have had very different backgrounds and experiences,” Pew said. “The one thing they have had in common is an absolute commitment to GA.”

Pew plans to continue flying and making full use of the freedom that general aviation offers. “I can still push my airplane out of the hangar and just go fly on a beautiful day,” he said. “That wouldn’t be possible without AOPA.”

Ratings | Private pilot since 1956 with instrument, seaplane, and glider ratings.