Get the app Get the app
AOPA will be closed July 4th, in observance of the Independence Day holiday. We will reopen at 8:30 am ET on Tuesday, July 5.
News & Media Mentor Matters: The dark side of the back side

Mentor Matters: The dark side of the back side

Every private pilot learns that the total drag an aircraft experiences in flight is the sum of two different varieties of drag. 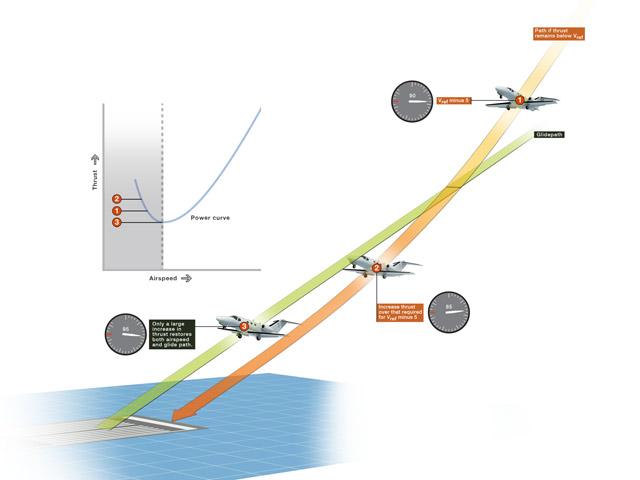 The jet at the number one position has slowed to VREF -5 knots, but is still not on the proper glidepath (green) to the runway. Meanwhile, the airplane is descending. At position number two, the pilot attempts to recover the lost airspeed, but doesn’t add enough power. By adding a large margin of power over that required for VREF, the pilot has established the airplane on the proper glidepath by position number three. If he hadn’t, the airplane would have continued on the orange glidepath, and hit short of the runway.

Every private pilot learns that the total drag an aircraft experiences in flight is the sum of two different varieties of drag. Parasite drag is straightforward to wrap the mind around—push an object faster through the air and drag will increase. Induced drag takes a little more pondering: fly at a slower airspeed and if lift is to remain constant, angle of attack (AOA) must be increased. Nothing in aerodynamics comes without cost, and as AOA increases, so does an undesirable byproduct of lift—induced drag. Thus, induced drag increases as airspeed decreases, the opposite of parasite drag. When we plot the sum of parasite and induced drag versus calibrated airspeed (CAS), we achieve the familiar “J curve.”

The lowest point on the J-curve marks the airspeed for minimum total drag. In unaccelerated flight thrust is equal to drag, so this speed also marks the minimum thrust requirement for flight. Above this speed an aircraft can be considered “speed stable.” If airspeed increases from an equilibrium point, drag will increase; therefore, without a change in thrust the extra drag will slow the aircraft back to its original speed. The converse is true, as well—if speed decreases, the reduction in drag will cause acceleration back to the original speed.

A jet’s wing is optimized for high-speed flight, particularly swept wings. Indeed, the entire purpose of a swept wing is to “fool” the wing into thinking it is flying at a lower speed than it actually is, so that drag can be reduced at high Mach values. Unfortunately, the wing is fooled at low speeds, too, and as a result tends to produce poor lift at low speed.

Even jets with unswept wings must make compromises to low-speed handling characteristics if high-speed drag is to be kept at a desirable level. As a result, jet aircraft often fly the final approach at a relatively high angle of attack, and at as little as 1.23 times stall speed. In contrast, many pistons routinely fly a final speed 30 to 40 percent greater than stall speed, buried far less deeply in the back side of the power curve.

One not immediately obvious effect on speed stability relates to the difference between thrust and power. Engines driving propellers can be thought of as primarily power producing, while jet engines are primarily thrust producing. Power is equal to thrust times airspeed (adjusted by a constant), so if a propeller aircraft’s power setting does not change as it slows, the thrust being produced increases. This helps counteract the increase in drag caused by the lower airspeed. While this thrust increase may not be enough, in and of itself, to counteract the increased drag, it does ameliorate it. Thus, this effect can be thought of as smoothing out the speed instability of a prop airplane operating on the back side of the power curve. Jet aircraft, in contrast, produce constant thrust as airspeed changes, and will get no assistance here.

Another factor is more straightforward to understand: the absence of prop wash over the jet-powered airplane’s wing. A twin propeller aircraft that slows below landing speed and increases power to correct instantly increases airflow over the large amount of the wing behind the propellers. This accelerated airflow creates immediate lift, as if the extra thrust is accelerating the aircraft itself. A jet, in contrast, can increase lift in only one way if angle of attack is to be held steady: by increasing airspeed. Adding sufficient thrust will accelerate the aircraft, but until the extra speed is achieved, no immediate change in lift will be realized.

The key word above is sufficient. Imagine the pilot has thrust set slightly too low to sustain flight at VREF. As the aircraft slows to 5 knots below VREF, it slips further up the back side of the power curve. To properly correct this situation, the pilot in effect needs to make three thrust additions, although in truth they are performed all at once.

First, because the original thrust setting was too low to sustain VREF, thrust must be added to the level that would maintain stable VREF. But the aircraft is now further slowed from the minimum drag speed, and more drag is present than at VREF, so even more thrust must be added to account for the extra drag if equilibrium is to be achieved. However, when flying slower than VREF, equilibrium is not what we want to achieve!

That’s why a third increment of thrust increase must be commanded: to provide thrust over what is needed at VREF minus 5, so the aircraft can begin to accelerate back towards VREF. Understand that if all three “blocks” of the extra thrust needed aren’t commanded by the pilot, the aircraft will at best simply hold VREF minus 5; at worst it will continue to lose speed, even though thrust was added.

Sadly, improper pilot understanding of, and correction for, the aerodynamics of flight below reference speed is an ongoing problem. What in 1979 likely was the first owner-operator single-pilot jet accident occurred when the PIC allowed the aircraft to slow below VREF (an improper calculation of VREF contributed, as well) and then made only small thrust corrections. The NTSB reports a passenger stated that as a high sink rate developed, the pilot “sort of inched them (throttles) forward,” not making the aggressive correction flight below VREF requires.

Fast forward 35 years, and one of the largest, most modern airliners was brought down in a similar manner. At 500 feet agl the airspeed of Asiana Flight 214 had decreased to 3 knots slower than VREF; just prior to impact, it had decayed to slower than 30 knots under VREF. The final story of Asiana 214 hasn’t been told, and the lessons learned may relate to automation management as much as aerodynamics. Nevertheless, it provides a chilling reminder of how quickly speed on the back side of the power curve deteriorates—and how aggressively a pilot must intervene to prevent disaster.