Get the app Get the app
AOPA will be closed July 4th, in observance of the Independence Day holiday. We will reopen at 8:30 am ET on Tuesday, July 5.
News & Media SoCal pilots descend on Chino

A thin cloud layer early in the day discouraged some VFR pilots, and many decided to drive to Chino instead. More than 950 cars were parked by a crew of more than 300 volunteers. There was a steady stream of IFR arrivals, as well, until the cloud cover dissipated around 11 a.m. More than 2,300 lunches were served, most by the 13 food trucks brought to the airport for the event. 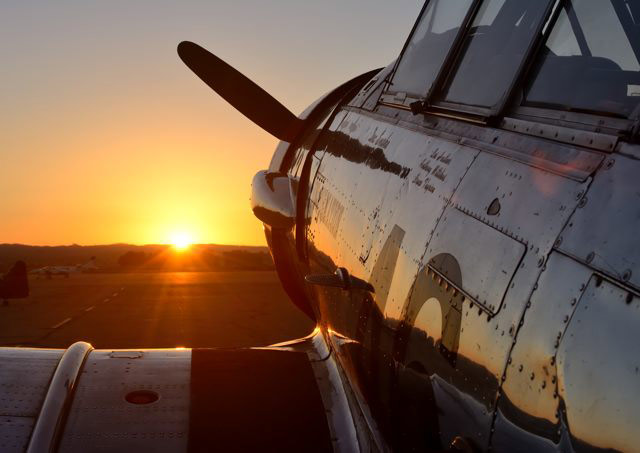 As an unexpected treat for attendees, Goodyear’s West Coast-based blimp performed a low-altitude pass along Chino’s east/west runways. Chris Kotlewski of San Bernardino pointed out the blimp to his two-year-old daughter Kyla, who was only nominally interested. “She’s getting pretty tired,” he said, as she snuggled her face in his shoulder.

Martin Renschler of San Diego was one of the IFR arrivals; the flight took him 55 minutes in a flying club Cessna 172. He had been told to expect to hold, “but they took me right in,” he said. Renschler was glad he made it to the event; the aircraft he originally scheduled would not start, but he was able to call several pilots on the schedule and move them between aircraft, so that one would be available for him for the day. “I flew out with another pilot from the same flying club. He saw on the schedule that I was flying to Chino and asked if he could tag along.” 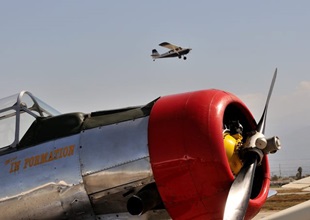 Chuck Stuewe of Chino Hills bases his Cessna 401 at Chino. “I’ve already been to two of the seminars,” he said around midday. “I never got to go to seminars during Summit in Palm Springs or Long Beach. I was always with friends who wanted to check out the aircraft and avionics.” Stuewe praised both maintenance expert Mike Busch’s seminar on engine health and the Air Safety Institute’s “What Went Wrong: Accident Case Study Live,” presented by Kristine Hartzell.

The event was “super-enjoyable,” said Brittany Greer; she and her husband keep their Piper Cherokee 180 at the French Valley Airport. “It’s nice to have all these vendors in one place.” Her son, Josiah, age 5, was especially interested in the Sennheiser headset display. 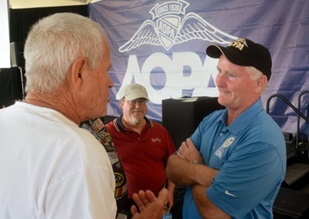 A Pilot Town Hall with AOPA President Mark Baker concluded the day’s program. After discussing the synergies being achieved by AOPA’s cooperation with EAA on several important current initiatives, Baker was joined on stage by EAA Chairman Jack Pelton. “We have so many issues that we’re working hand-in-glove together,” Pelton said.

As of Friday, Baker said, 170 members of Congress have signed on in support of third class medical reform. He anticipates the rulemaking, currently under review, will be released by the FAA in early December. “They don’t really want Congress telling them what to do,” he said. “Stay tuned—something’s finally happening.”

Baker also mentioned progress with Customs and Border Protection, following his meeting with the CBP commissioner, which led to some program changes and appear to have halted the controversial stops of general aviation pilots flying within the U.S. borders. This update was acknowledged by the pilot audience with vigorous applause.

Baker told the crowd that AOPA will continue its regional fly-ins during 2015. “We’re really happy with this format. We hope you are,” he said. The crowd’s round of applause provided a clear answer.

AOPA’s next regional event will be the Homecoming Fly-In, held at AOPA’s headquarters in Frederick, Maryland, on Oct. 4.

Technical Editor
Mike Collins, AOPA technical editor and director of business development, died at age 59 on February 25, 2021. He was an integral part of the AOPA Media team for nearly 30 years, and held many key editorial roles at AOPA Pilot, Flight Training, and AOPA Online. He was a gifted writer, editor, photographer, audio storyteller, and videographer, and was an instrument-rated pilot and drone pilot.
Go to Mike Collins's Profile
Topics: Fly-in, AOPA Events, Events