Get the app Get the app
AOPA will be closed July 4th, in observance of the Independence Day holiday. We will reopen at 8:30 am ET on Tuesday, July 5.
News & Media Training Tip: Aircraft speed limits

Descending from a high cruise altitude at the end of a dual cross-country flight, a student pilot has acquired new insights into the normally aspirated trainer’s flight characteristics at the upper limit of its altitude range. Compared to cruise at more typical altitudes, horsepower is less for a given rpm setting; climb performance eroded significantly as the aircraft neared its service ceiling.

It took a long time to climb to that lofty cruise altitude after takeoff, but higher-altitude cruise has its advantages. Overflying Class B and Class C airspace areas in a properly equipped aircraft is one. Another, for example in the mid-Atlantic states, can be the rare pleasure of surmounting the haze layer that so often restricts visibility, especially when a stable air mass is in place.

Having absorbed so many new flight impressions, the student is momentarily put off when the instructor taps the altimeter as the aircraft descends through 10,000 feet msl and quips, "Be sure to slow down to 250 knots."

How many times has that jest been sprung in the cockpit of a 110-knot trainer? Still, the CFI’s "reminder" places useful focus on an aircraft speed regulation that states that “unless otherwise authorized by the Administrator, no person may operate an aircraft below 10,000 feet MSL at an indicated airspeed of more than 250 knots (288 m.p.h.).”

Not an issue for this flight! But a refresher on the rule’s provisions will improve any pilot’s situational awareness by serving as a reminder of how flight operations are conducted by the larger, faster aircraft sharing busy terminal airspace. The regulation also contains provisions restricting aircraft speed to a maximum of 200 knots "at or below 2,500 feet above the surface within 4 nautical miles of the primary airport of a Class C or Class D airspace area" and "in the airspace underlying a Class B airspace area designated for an airport or in a VFR corridor designated through such a Class B airspace area."

Note for example that a trainer departing Frederick Municipal Airport in Maryland west toward Martinsburg, West Virginia, or northeast toward the Westminster, Maryland, VOR would fly in the vicinity of high-traffic arrival and departure routes employing a range of altitudes, depicted on the Baltimore-Washington Terminal Area Chart.

Perhaps you will upgrade to a high-performance aircraft someday. Meanwhile, reviewing this regulation will make you a more effective plane spotter when ATC calls out fast traffic in busy (and haze-laden) airspace. 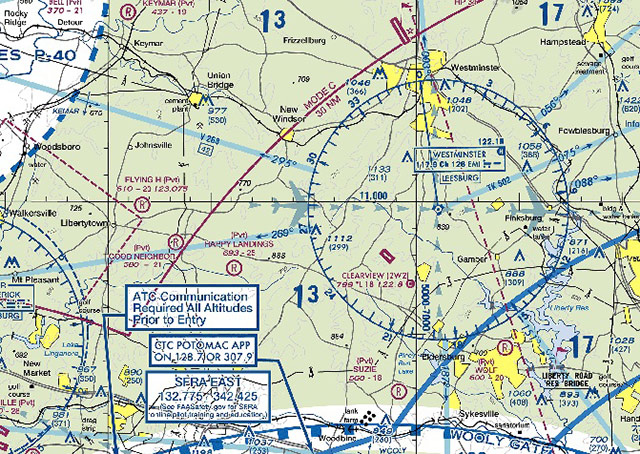 Dan Namowitz has been writing for AOPA in a variety of capacities since 1991. He has been a flight instructor since 1990 and is a 35-year AOPA member.
Go to Dan Namowitz's Profile
Topics: Collision Avoidance, Communication, Training and Safety