Editor's note: This article was updated Oct. 2 with the latest information available. 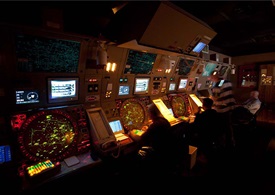 As the FAA contractor accused of setting a Sept. 26 fire that took the Chicago Air Route Traffic Control Center offline appeared in court Sept. 29, the FAA was hard at work repairing the damage and pledged a prompt review of security and outage response.

FAA Administrator Michael Huerta detailed the agency’s response, with the ATC load normally handled in the Aurora, Illinois, facility shifted to neighboring air traffic control centers and tracon facilities in order to restore the system. The goal was to have Chicago Center itself back online Oct. 13, Huerta said.

“That is an extraordinarily accelerated timeline, and I have to thank the teamwork of the employees in the Central Service Area and all across the nation, for their dedication and willingness to work round-the-clock to get this done,” Huerta said in a Sept. 29 speech at an air traffic control conference.

A prohibition on transiting the Chicago ARTCC airspace remained in effect through Oct. 13, with special filing procedures announced by notam for operators flying to and from airports within the KZAU control area, which encompasses hundreds of airports spread over five states and 91,000 square miles. The National Business Aviation Association posted online guidance for aviators, including links to FAA sites where estimated delays to filed flight plans could be obtained before departure. 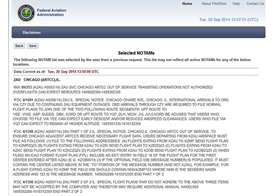 The FAA reported Sept. 29 that Chicago O’Hare International Airport and Chicago Midway International Airport were close to returning to normal capacity, with more than 80 percent of normal flight volume restored at O’Hare and 90 percent at Midway. Replacement equipment had begun to arrive in Aurora, with additional deliveries expected through Sept. 30.

Brian Howard, the contractor accused of setting fire to the critical computer and communications equipment at the Aurora facility in the course of a suicide attempt, made his first appearance in federal court Sept. 29, and was ordered held without bail. Howard’s attorney called the fire “a tragic mistake in the course of trying to end his own life.”  Bloomberg reported on the incident in detail Oct. 2, noting that Howard targeted both primary and backup systems and took steps to insure the fire would do maximum damage.

Huerta and the agency faced sharp criticism from members of Congress following the weekend disruption that saw hundreds of flights cancelled or delayed, with delays and disruption expected to continue until repairs are complete. The FAA reported Sept. 29 that extra security staff has been deployed in the Chicago center, and the agency has made “staffing adjustments” at other facilities.

Huerta, in his Sept. 29 speech, said the NextGen airspace modernization plan (recently the subject of a critical evaluation by federal inspectors) will allow a more prompt and efficient restoration of service following future outages.

“This incident in Chicago is also a stark reminder of the reasons that we are working toward an even more robust and scalable system. In the future, our ability to agilely shift air traffic management responsibilities between facilities is a key objective of NextGen,” Huerta said. “But getting there requires stable and adequate funding, the right people in the right place, and a sustained commitment to follow through on today's plans.”