Get the app Get the app
Already a member? Please login below for an enhanced experience. Not a member? Join today
News & Media Voila! The first G600/GTN 750 TBM

Daher-Socata announced that it had installed the first Garmin G600 and GTN 750 avionics in one of its 2004 TBM 700C2 airplanes. The retrofit package, which is available to owners of TBM 700s and non-G1000-equipped TBM 850s, is priced at $120,000 and up, and takes approximately 250 man-hours to complete. L-3 Avionics Systems’ Trilogy ESI-2000 standby attitude indicator is also a part of the retrofit; it replaces the airplanees’ traditional standby instruments.

The upgrade, first revealed at EAA AirVenture in 2013, promises to bring many older TBM cockpits a lower-cost alternative to a full-blown G1000 retrofit. The G600 pairs a primary flight display (PFD) with a multifunction display (MFD). The PFD can give synthetic vision views, and the MFD can show terrain warnings, and display flight plan information, datalink weather, and nearby traffic. The GTN 750 is a GPS nav/com with a large, touch-screen, interactive moving-map display that incorporates audio panel, intercom, and transponder functions, as well as electronic charts. Automatic Dependent Surveillance-Broadcast (ADS-B) weather (FIS-B) and traffic information (TIS-B) can also be displayed on the GTN 750.

Louis-Alain Dumont is the owner of the first upgraded TBM, and he chose a second G600 for the co-pilot’s side of the panel, as well as a second GTN 750, a Garmin GSR 56 satphone, and new Garmin GTX33 Mode S transponders.

“This is definitely an attractive upgrade for owners of the more than 400 non-glass TBM 700s and TBM 850s at an attractive cost, which will increase the overall value of their aircraft,” said Nicolas Chabbert, senior vice president of Daher-Socata’s Airplane Business Unit. 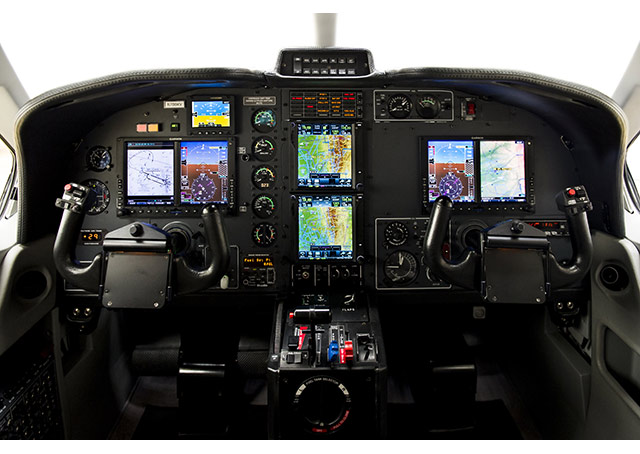 AOPA Pilot Editor at Large
AOPA Pilot Editor at Large Tom Horne has worked at AOPA since the early 1980s. He began flying in 1975 and has an airline transport pilot and flight instructor certificates. He’s flown everything from ultralights to Gulfstreams and ferried numerous piston airplanes across the Atlantic.
Go to Thomas A. Horne's Profile
Topics: Aircraft, Turbine Aircraft, Avionics