Get the app Get the app
AOPA Members DO more LEARN more SAVE more - Get MORE out of being a pilot - CLICK HERE
News & Media Rev. White’s Air Force 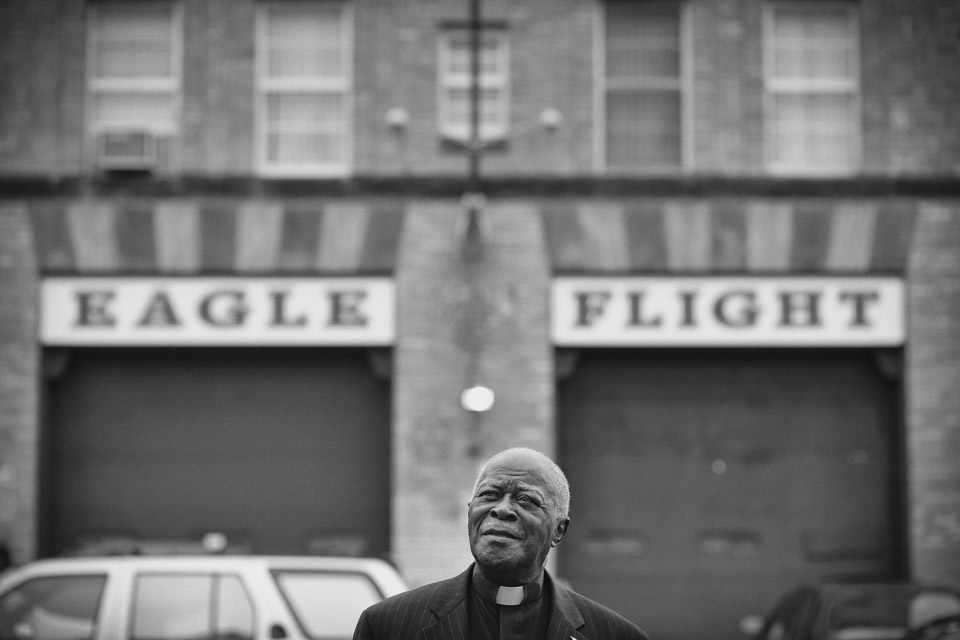 While the Rev. Russell White> works on his latest model—a balsa wood F4U Corsair with a 30-inch wingspan—he launches into his well-practiced version of Eagle Flight Squadron’s birth. The year was 1975, and White was pastor of the Bethel Baptist Church; a truant officer at New Jersey’s East Orange High School; and a former Boy Scout and military man increasingly frustrated with neighborhood poverty, student despondency, and their failing grades. Every day he’d walk outside the school and round up kids cutting class, and he’d drag them inside to the discipline office where they’d be suspended. It got to be too much for the reverend.

The program is funded through grants from local organizations and private donations, and annual fundraisers. The kids do pay tuition—$700 per year. Students complete an application, write a short essay on why they are interested in the program, and have a personal interview. To stay in the program they must maintain a B average or better in their regular schoolwork (Rev. White is often quoted: “Get a C? See ya.”) They also need to attend the Eagle Flight classes regularly and maintain a high level of participation.

The future. “We are trying to create and maintain as many meaningful partnerships as possible,” Chisolm says. “Exposure to all aspects of aviation is so important, so any opportunity that we have to visit an organization or business or have internship opportunities available is really key. As we look to expand, we are going to need access to more resources as well as instructors, volunteers, and funding.”

White still has some ideas for Eagle Flight. Maybe expand the model to some other fields like commercial boating. But no matter, he’s still proud of what he’s been able to accomplish. “I don’t care where the kid comes from, if he’s interested in coming to Eagle Flight, we can teach him how to fly,” he says. “Not only do we teach them how to fly, but we deal with character building and how to learn.”

Chisolm says they are currently developing a curriculum that supplements the flight training with the principles of engineering and computer science. “So many people talk about STEM education; when you think about it, we’ve been giving students hands-on STEM training in real airplanes for 39 years,” he says.

“We are looking at summer 2015 to begin our six- to eight-week-long aviation, engineering, and technology camp for high school students. This is an ambitious goal—but so was the idea of starting a flight school in the middle of East Orange, New Jersey, in 1975!

“One thing Rev. White says is that in 39 years, we haven’t used a Band-Aid yet. We definitely want to keep that up,” Chisolm adds. “You ask the kids and they tell you all the time it’s really interesting. They walk around high school and not a lot of other kids can fly an airplane,” he says. “Kid’s sitting back and says, If I can fly an airplane, I can do anything. All this from a program that this crazy pastor started 39 years ago to teach kids to fly.”

Phil Scott is a freelance writer and private pilot who lives in New York City.

“This one day I found this group of six kids out in the street, which was illegal, and I got frustrated. I said, You guys are running away from yourselves. Well, at this time an airplane flew over and I said, You guys could do things like that.

“You can do anything, I said. Meet me after school and we’ll go flying.” 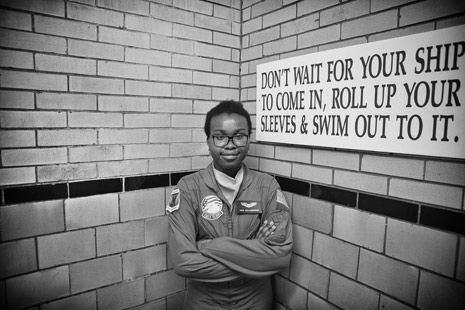 Ikna Shillingford is a high school senior who plans to be an aeronautical engineer. She soloed this summer. 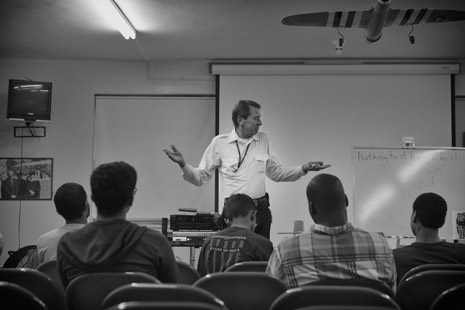 Former army ranger Steve Lind is the chief instructor for the Eagle Flight Squadron. He teaches ground school every Thursday. 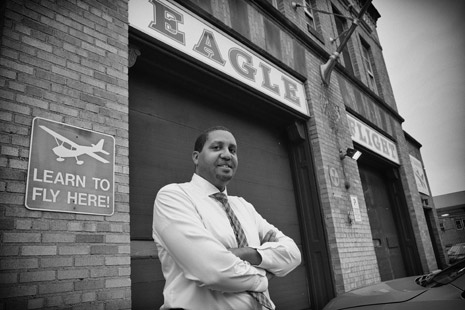 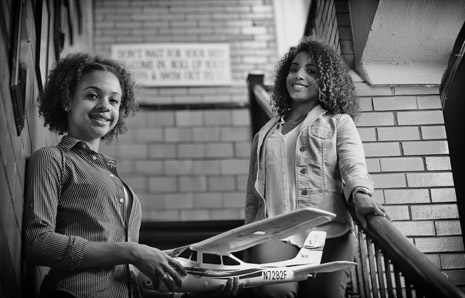 Sisters Kayla and Rachel Turner both participated in Eagle Flight during high school. When their father first took them and they participated in the drills, the pair asked him if they were being punished for something. Both later embraced the program and are among the many successful alumni who return for visits. In college at Montclair State University, Kayla is a junior majoring in biology and Rachel is a senior majoring in psychology. Both have their pilot certificates.

White went to the school’s discipline officer—the man who hired him—and said, “Instead of suspending them, let me have these youngsters.” That afternoon they loaded into the reverend’s car and drove out to Morristown Airport to a flight school whose owners knew White. He asked them to give the kids a deal on lessons. They agreed to supply the airplane and the instructor gratis, while White would find a way to supply the fuel and oil. But they also asked the reverend not to bring them all out at once. It was a business, and they didn’t want to freak out the customers.

“At that particular time, that many African-Americans was too many,” White says. “It was 1975, and ignorance was everywhere. But I complied.”

He named the group Eagle Flight Squadron and gave them a motto: “Look up and be looked up to.”

Despite the deal he cut with the FBO, Eagle Flight still didn’t have that kind of cash. “We used to go out to the parkway and collect change off the side of the road, and people would see us and go out and give us a five-dollar bill,” he says.

The aircraft. White searched for a trainer, and found an FBO willing to part with a Cessna 150 that no one would rent, mostly because it was painted pale blue. He went out to meet it landing at Morris County Airport, and it taxied in with a 172 that the FBO threw in for good measure.

Being ex-military, White wanted to instill teamwork and discipline in his kids, to teach them how to listen and work together, to teach them courtesy and respect. So first on the list was close-order drill. “And I wanted uniforms that could be used without the kids going broke buying it, so I went with a military surplus flight suit and yellow ascot,” he says. “Treat them like pilots, dress them like pilots, and they become pilots. And with the neck scarf the drill team really looked good.”

For the first couple of decades Eagle Flight met Thursday evenings in the church basement. Then 14 years ago the city offered White the abandoned Firehouse Number 4—which, like the rest of East Orange, needed a lot of work. The kids refurbished it, and every Thursday evening they drill on the ground floor where fire trucks used to park. The new kids, some as young as 11, barely know left from right, but in a couple of years they’re teaching the newbies. Ground school classes are held on the upper floors. They also take courses in public speaking, math, English, writing, and life skills. On the weekends the older students schedule lessons with flight instructor Steve Lind, the only staffer of four who receives a salary. A former Army Ranger and then a pilot for WCBS, Lind had logged some 8,000 hours reporting traffic above New York City when, in 2000, his buddy White approached him to become chief flight instructor.

“Ninety-seven percent of the students are people of color,” Lind says. “Their family life is mostly matriarchal. It took me a while to figure out that I’m the father figure.” At last count, five of his students have graduated from various military academies, and this year one is going to the United States Military Academy at West Point.

“It’s not easy to train them, because kids nowadays have video games in front of them and their fingers going at the speed of light,” he explains. “They have attention spans of two or three seconds. The thing we really do is not so much teach them how to fly. We teach them how to learn, to think, how to problem-solve, assess risk, and display judgment.”

Today Eagle Flight students fly from Essex County Airport (CDW) in Caldwell, New Jersey. They have a donated Cessna 150, and a Cessna 172 that the group purchased. They are not using simulators but have started to explore how they can be brought into the program.

Passing the torch. In 2013, after nearly 300 kids had graduated, White decided it was time to hang up the yellow ascot, kick back in the garage, and build balsa-wood models. “I didn’t want them to kick me out, and didn’t want to be kicked off the mountain,” he says. “I knew when it was time to quit.” He choose his successor, a former Eagle Flight Squadron member named Michael Chisolm, who started in 1997.

“About nine months in the program I went for my first flight when I was 14, 15, and I thought, This is nice, I like this,” Chisolm says. He went on to finish high school, got his bachelor’s at Daniel Webster College in New Hampshire, and his master’s at Rutgers University. In the late 1990s he got his private certificate, but decided that he didn’t want to fly professionally and went into airport management, now working for the Port Authority of New York and New Jersey at La Guardia Airport.

Why did White chose him? “I’m definitely not a military man,” Chisolm says. “I think it’s a combination of things. I’m alumni of the program so I understand what the students are going through and dealing with, I’ve been involved a lot in a volunteer capacity helping with the program or in the classroom, and there’s my aviation-management background.”

Since he’s taken over, he says the most difficult part is making sure that Eagle Flight consistently generates enough community support to stick around without White. “Reverend White was an innovator,” he says, “teaching kids from urban areas to give them something to do, something that gives kids from urban areas an exposure they normally don’t get—a sense of confidence by using aviation.

“I’m biased, but I think I have a great thing here,” Chisolm says. “I want to work at the model and think how we can expose other kids to the opportunity. On a consistent basis we have 20 kids. I’d like to see that number grow. And have the program expand regionally and nationally.” 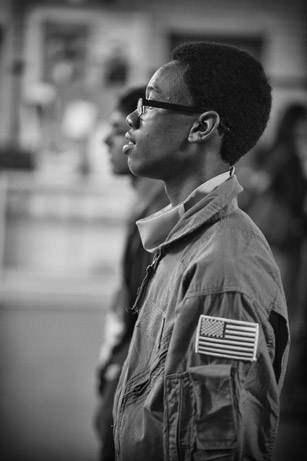 Patches on the uniform and the yellow ascot give the military surplus flight suits flair. 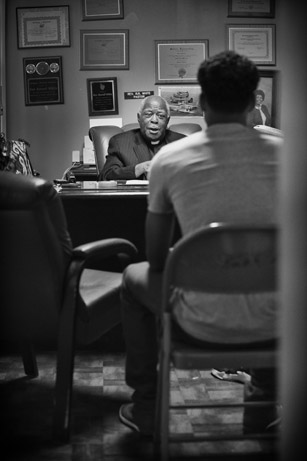 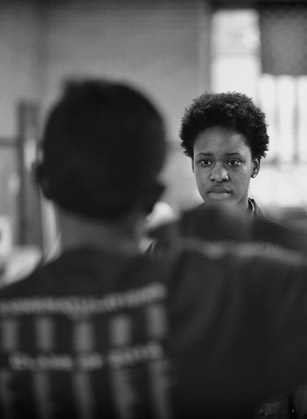 Karenine Joubert is a high school senior. She is one of the squadron’s two student leaders and soloed this summer. 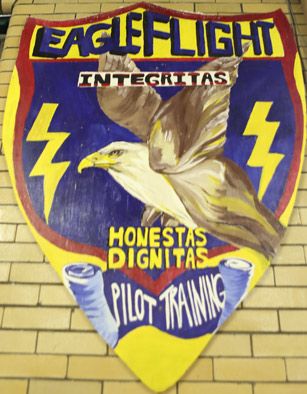 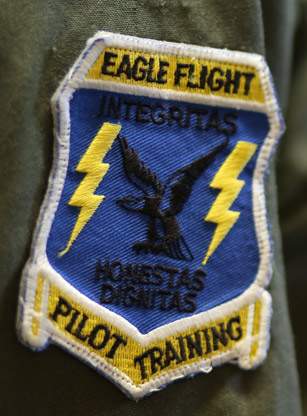 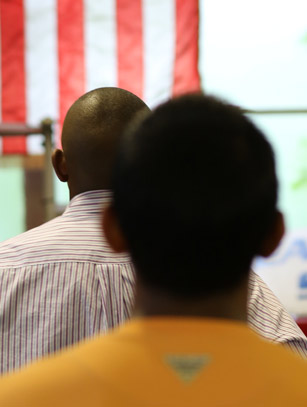