Get the app Get the app
AOPA Members DO more LEARN more SAVE more - Get MORE out of being a pilot - CLICK HERE
News & Media Upwind, Whirly-Girls announce scholarship winners

Four California teens have been selected to earn their private pilot certificates in the summer through the Upwind Summer Scholarship Program, the Upwind Foundation announced March 26.

The scholarship provides ground school, flight training, and other flight training resources for Anthony Bellanti of San Mateo, Kevin Gray of Belmont, Evan Isenstein-Brand of Pacifica, and Michelle Karpishin of San Mateo. The students will begin ground school in April and continue with flight training in the summer between their junior and senior years in high school, according to the nonprofit organization. Ground and flight instruction for the 2015 winners will be conducted at San Carlos Flight Center.

“We are extremely pleased to award four scholarships this year—double the number of scholarships awarded in prior years,” said Upwind Board Chairman Dan Dyer in a media release. “There were several qualified candidates and the final decision was not an easy one.”

Bellanti, a student at Burlingame High School, is interested in architecture and works as a lifeguard for the Burlingame Aquatic Club, according to the release; he said earning his pilot certificate is a lifelong dream. Gray, whose goals include becoming a Naval aviator and astronaut, said he is fascinated by the engineering and mathematics of aviation, its potential to change lives, and the feeling one gets in the air. The junior at Carlmont High School enjoys board sports and parkour and works at Planet Granite, according to Upwind.

Isenstein-Brand, a student at Sequoia High School, works on the flight line team at San Carlos Flight Center and shares his photojournalism work on a website, Upwind said. “A magical flight in an open-cockpit biplane when I was 8 years old got me hooked on flying, and I haven’t been able to shake the craving for flight since,” he said. Karpishin, a junior at Hillsdale High School and competitive swimmer, plans to study mechanical or aerospace engineering in college and hopes to improve airplane safety or the design of spacecraft, according to Upwind.

The Upwind scholarships were created by Bay Area pilots to promote piloting and general aviation, and to cultivate interest in aviation as a career.

Whirly-Girls International also announced its 2015 scholarship winners in March. The nonprofit, which is dedicated to “advancing women in helicopter aviation,” announced the winners of 14 scholarships March 1 at the organization’s annual banquet at HAI Heli-Expo in Orlando, Florida. 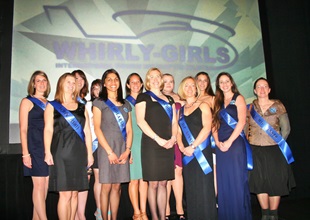 Looking for more information on scholarships? AOPA administers a scholarship program for student pilots of all ages; applications for the 2015 AOPA Flight Training Scholarship Program will be available by May 22. Or check out more news related to scholarships here.