Get the app Get the app
Already a member? Please login below for an enhanced experience. Not a member? Join today
News & Media 10,000 airplanes for Caleb: Wish rallies pilots

Caleb Yao had told his mom, Karen, that he wanted 10,000 model airplanes for his sixth birthday on March 16, but he and his family were surprised when they found about 70 packages stacked outside their door. Caleb’s wish had motivated an army of Southwest pilots to shower the Yaos with more than 150 airplanes, giving the family a shot of excitement and a brief respite from the stress and pain involved in Karen’s battle with cancer.

Hans and Karen Yao, who have two sons—Andrew, 8, and Caleb—said that each birthday they celebrate together as a family is precious. Karen was diagnosed with cancer in 2008; Andrew was about 15 months old, and Karen was just a few weeks pregnant with Caleb.

She and her husband were faced with difficult treatment options. Hans said that often parents have to consider terminating the pregnancy. However, in Karen’s case, they decided that it was an acceptable risk to treat Karen while she continued to carry Caleb. Karen underwent multiple surgeries and rounds of chemotherapy while pregnant with Caleb, and he was delivered a few weeks early in order for her to move to the next phase of treatment. Caleb was born healthy, and, as Karen is quick to point out, with a full head of hair.

Karen’s cancer returned in late 2013. When Hans’ classmates at Southwest learned the news (Hans is a first officer for the airline), they launched a fundraising website to raise money to help with her medical bills. According to the website, the pilots have raised nearly $50,000 to date. In response to the outpouring of support, Hans posts Karen’s blog updates on her treatments to a forum for Southwest pilots.

One of those updates mentioned Caleb’s birthday wish. Southwest pilot and cancer survivor Kyle Hamel follows the updates on Karen’s treatments and saw Caleb’s wish. “I can get him one closer,” Hamel said he thought after reading the post and then decided, “Let’s see how close we can get him.” Hamel posted a new thread on the Southwest pilots’ forum to get 10,000 airplanes for Caleb. “I wanted to take their mind off Karen’s condition for a day,” he said.

He’s done that, and more. The thread immediately spread among Southwest pilots as they replied with what kind of airplane they were going to send to Caleb. Karen and Hans said neither of them dreamed Caleb’s request would spread, especially because it was a note mentioned in passing at the end of a regular update. 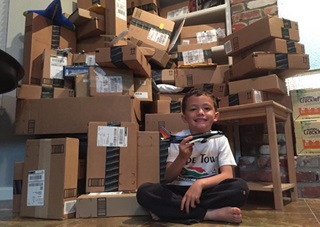 The week before Caleb’s birthday, packages started arriving. Karen estimated that more than 70 packages were stacked up outside their door when she and her two sons arrived home from their karate class. Karen said she started laughing out of pure joy—a laugh she said she hasn’t had in a while.

What Hamel hoped would take the family’s mind off Karen’s cancer for one day turned into a week of anticipation and excitement. “They just kept coming every day—more and more,” Karen said.

Caleb has received airline, military, and general aviation models. He also has some airport diagrams, and has created his own airport—minus air traffic control—to house all of the airplanes. Caleb admitted that his airport does get a little crowded without air traffic control sequencing the different airplanes. He shares one of his airplanes, the Lockheed C-5 Galaxy, with his older brother because it’s Andrew’s favorite.

By Andrew’s estimates, they’ve received 1,000 airplanes. Hans, who has been keeping a list of each model, said they’ve actually received about 150 airplanes, 250 if you count a box of paper airplanes. It’s not the number that matters to the family, though.

“It was just so special to have that, to get out of the humdrum of cancer land,” Hans said, adding, to “be flooded with this warmth and love.” 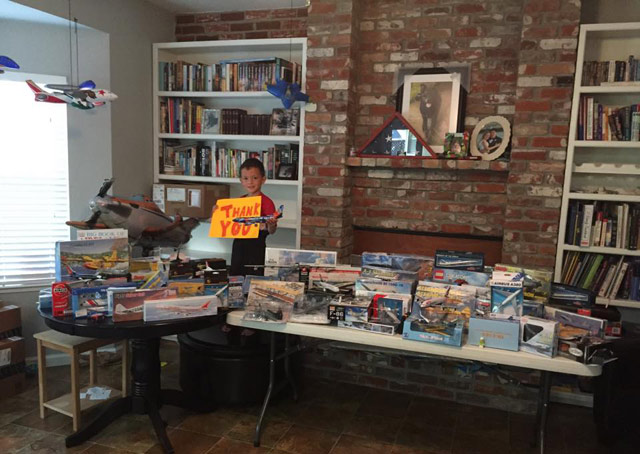 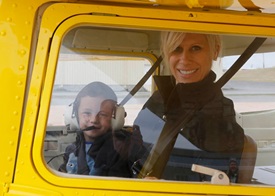 A flight for Caleb 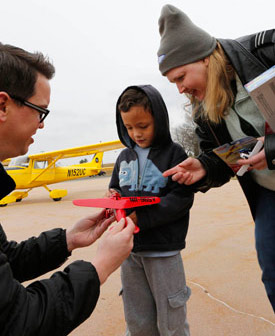