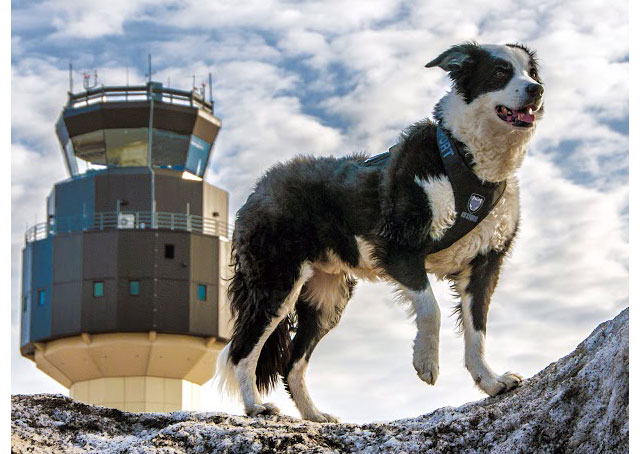 From the birds’ perspective, Cherry Capital Airport is a decidedly unfriendly place. It’s been that way for years—humans have limited food and nesting options, blasted noisemakers, and fired pyrotechnics, all of which was annoying to avian visitors. Sometimes, airport officials resorted to trapping and forced relocation. But now, they’ve gone and introduced a genuine predator: roughly 50 pounds of fur, churning paws, and teeth.

From a pilot’s perspective, however, Piper, the seven-year-old border collie trained by owner and airport staffer Brian Edwards, could be a lifesaver.

Bird strikes are an increasing problem worldwide, and Traverse City, Michigan, has more than its share of avian visitors. The FAA has collaborated with other federal agencies and aviation organizations (including AOPA) in an effort to reduce the threat, noting in its most recent report on the topic that wildlife strikes (97 percent of which involve birds) have killed more than 255 people and destroyed more than 243 aircraft since 1988.

Cherry Capital Airport has had its share of bird collisions, including a loon strike in May that severely damaged an inbound flight. That may soon be a thing of the past.

“We’re a destination airport,” said Cherry Capital Airport Manager Kevin Klein, noting that the airport hosts about 100,000 operations a year, a mix of general aviation, commercial, public safety, flight training, and other operations. The airport stays busy year-round, though summer is the busiest season for both aircraft and birds. “We’re a really unique airport that brings in a lot of traffic in the summertime.”

That includes the unauthorized traffic that has boomed in recent years. July is the peak month for bird sightings and bird strikes. According to the airport’s Wildlife Hazard Assessment, 3,601 birds were counted on airport property in July 2013; there have been 41 bird strikes reported during the month of July between 1990 and 2013, more than any other month. The increase comes from a mix of migratory species, including geese—the culprits that brought down Captain “Sully” Sullenberger’s US Airways Flight 1549 in 2009 and made world headlines. In winter, the snowy owls (Bubo scandiacus) arrive. Since Piper joined the airport staff last year, those birds, which can weigh more than six pounds and do significant damage to an airplane, don’t stay long.

“Well, we’ve had six, eight snowy owls that will come on to the airport, and since Piper’s been here, we haven’t had to trap like we did in years past,” Klein said. “Piper’s made them active and chased them off the airport. I look at Piper’s effectiveness as we’ve been able to get those animals off the airport, and that alone has been fantastic.”

Piper’s reputation is spreading among birds and humans alike. The eager border collie was featured recently in a local newspaper story picked up by others around the country. Piper has become a well-known presence to pilots and passengers as well, Klein said.

“He creates such a value not only to do the job that we call him for, the bird (chasing),” Klein said. “The peace and calming that a dog brings to the people at an airport is amazing, and I think that’s an asset that we’re really starting to find as it comes. And it’s growing.” 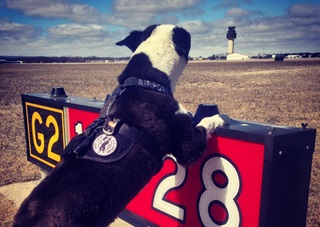 Bred for the chase

Border collies have a natural herding instinct, and a strong resemblance to the natural predators of many nuisance bird species. They have been used to chase airport birds sporadically around the country, dating to 1999 when zoologist Nicholas B. Carter trained the first airport bird dog for Southwest Florida International Airport in Fort Myers. Carter, who holds multiple doctorates, operates the nonprofit Border Collie Rescue in Texas, and a for-profit business, Birdstrike Control Program. Carter, in a telephone interview, said he no longer trains dogs and turns them over to airport staff, but instead provides a comprehensive service that includes a full team: one or more dogs with trained handlers who hold advanced degrees in biology, animal behavior, and related disciplines. He said military bases have embraced the approach, in large part because the airport operators and aircraft owners are one and the same. In a civilian context, airport operators have been less enthusiastic about shouldering the cost of a program that benefits airport users, but has limited financial return for the airport itself. Despite the success of border collie patrols in Florida and elsewhere, only a handful of civilian airports have dogs on staff, said Carter, who is also on the board of the World Birdstrike Association.

“When they do a great job, especially smaller airports, they tend to put (the dogs) away, treat them like lawnmowers,” Carter said, meaning that the dogs are used only sporadically when birds become a problem. The dogs can suffer from inactivity, and lose their edge. “They need work all the time, every day.”

Traverse City is fortunate to have a dog owner on the airport staff who can keep Piper working, but Carter said that is an unusual circumstance. Hiring professionals is a costly proposition—Carter charges between $5,000 and $9,000 a month, depending on several factors including the airport’s size and the number of teams required.

“The dog should be there all the time,” Carter said.

The cost helps to explain why Piper is among only a handful of dogs currently working at civilian airports around the country, despite the demonstrated effectiveness of such a program when executed well. Carter said that the Israeli Air Force, one of his clients, saves about $10 million a year now that bird strikes at Israeli air bases are virtually unheard-of.

Edwards, who returned to the Cherry Capital Airport operations staff in 2011 after a hiatus to attend air traffic control school, said he was training Piper for canine athletic competitions when the thought occurred to him that the eager young border collie might find important work at the airport. He researched the use of border collies in an airport environment extensively, and approached Klein with the idea. After careful review of the legalities, liability, and insurance issues, and conversations with the FAA and U.S. Department of Agriculture, and state officials, approvals were secured and Edwards began training Piper for the new job. It was a gradual process, beginning at home and transitioning to the airport, where Piper was first introduced to the ramp and runways in the cozy confines of the SUV used for airport patrols. Eventually, Edwards brought him outside, giving the dog a chance to get used to airplane noise and activity.

Edwards carries a radio to coordinate with the control tower and avoid potential conflicts between Piper and aircraft operations. Over the winter, Piper was introduced to the snowy owls, which inspired much enthusiasm on the dog’s part. 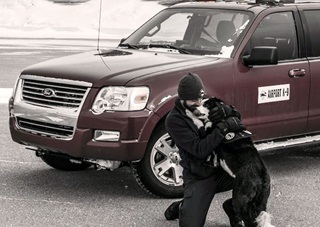 “He feels he still has a shot at them because they’re flying three feet off the ground,” Edwards said. “We started that in about second week in January and we were chasing them pretty hard for a couple of weeks or so. Some of the chases would last an hour and a half …. (with the) control tower making fun of us, just going in circles.”

Eventually, the owls learned that Piper would not give up, and began choosing other places to roost. Even the sight of the SUV from which Piper is released with the words “go get ‘em” is now enough to drive the birds away.

“I didn’t even have to let him out,” Edwards said.  The owls took one look at the approaching vehicle and “didn’t want to have any part of it.”

The early results are promising, though Piper’s biggest test is yet to come, as the summer and peak bird season arrives. Thousands of visitors will converge for the National Cherry Festival Air Show and Piper will be on patrol, by then with more experience under his belt (actually, a custom harness identifying him as an official airport K-9). In a few months, Klein said, there will be a full year of data available to show Piper’s effect on the airport  bird population, and the expectations are high.

It may not be the answer for every airport, given the cost, logistics, and training challenges, but Edwards and Piper have so far proved the most effective solution yet for Traverse City, where Piper is now firmly established as the pilots’ best friend.