Get the app Get the app
AOPA Members DO more LEARN more SAVE more - Get MORE out of being a pilot - CLICK HERE
News & Media P&E: Avionics

It seems like the tail wagging the dog, but iPad apps that sell for $150 a year or less are beginning to drive avionics purchases that may total tens of thousands of dollars. 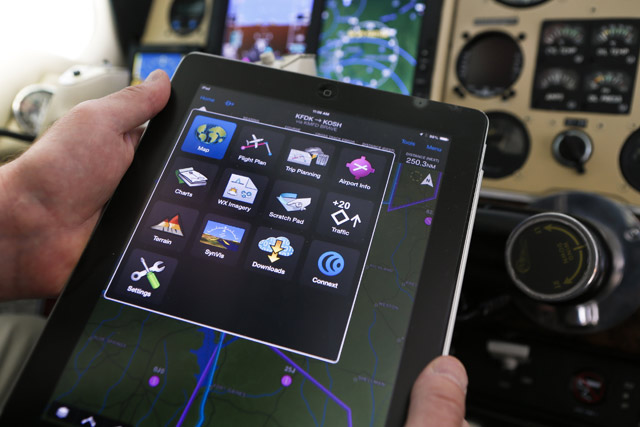 It seems like the tail wagging the dog, but iPad apps that sell for $150 a year or less are beginning to drive avionics purchases that may total tens of thousands of dollars.

This purchasing trend started when apps were linked to certain brands of portable ADS-B receivers: ForeFlight paired exclusively with Stratus, and Garmin only connected to its own GDL-39.

Now, as pilots seek out wireless connections between their tablet computers and panel-mount avionics, the stakes are getting far higher. Avionics manufacturers say pilots are buying entire avionics suites based in large part on which ones offer wireless connections to their favorite aviation app.

ForeFlight recently formed a partnership with Dynon Avionics in the Experimental and LSA markets, and both ForeFlight and WingX signed on when Aspen Avionics first announced its Connected Panel concept for FAA-certified aircraft in 2012. Garmin followed with its own Connext program that links its Garmin Pilot app to more than 100,000 of the popular panel-mount navigation systems the company has manufactured since the late 1990s.

“It seems a little silly at first, but I think about my own flying and I interact with my iPad and the apps much more than the panel avionics,” said John Zimmerman, a vice president at Sporty’s who flies piston singles, helicopters, and jets. “Situational awareness, terrain, weather, and airport information all come from the app. So in that sense, maybe the app should come first.”

Zimmerman said the trend of apps determining avionics choices is in its infancy, but it’s likely to grow as the integration between tablets and both portable and panel-mount avionics gets tighter. Information transfer between tablets and avionics already has become a two-way street: Pilots send flight plans via tablets to their avionics—and WAAS GPS signals, attitude, engine information, ADS-B weather, synthetic vision, and even music come back to the tablets.

Also, while pilots may have started out using aviation apps solely for flight planning, the apps have grown in capability so that now they’ve become indispensable in flight. General aviation pilots flying under Part 91 can use tablet computers for all their charts and aircraft manuals—and many corporate aviation departments and airlines have FAA approval to do the same thing.

Pilots tend to spend many hours learning the nuances of their chosen apps, and that investment of time and effort makes them loyal. Also, pilots tend to use their tablets while traveling for Internet access, sending and receiving texts and Email, taking photos, and navigating unfamiliar cities. That high level of use creates tight bonds.

Jessica Koss, a Garmin spokeswoman and CFI, said the fact that pilots are with their tablet computers around the clock is important.

“The GPSMAP 496 has an extremely loyal following, in part because pilots can use it both in and out of their airplanes,” she said. “We’re seeing that even more with Garmin Pilot. People use the app to plan their flights and file their flight plans. It’s a natural progression for them to use the same devices to load their flight plans and modify them in the air.”

That level of familiarity—and the reflex to check Internet-connected devices for everything from news and weather to restaurant choices—is beginning to shape GA instrument panels. ForeFlight/Stratus fans have a powerful incentive to gravitate to Dynon’s Skyview system, while Garmin Pilot/GDL 39 aficionados have similar reasons to stick with Garmin products.

“You live with your iPad every day, including preflight planning and nonaviation use,” Zimmerman said. When the time comes to make major avionics purchases, pilots want equipment that ties into apps that they already know well.