Get the app Get the app
AOPA Members DO more LEARN more SAVE more - Get MORE out of being a pilot - CLICK HERE
News & Media P&E: Technique

This takeoff made me nervous, even though the performance tables in the pilot’s operating handbook assured me there would be plenty of margin. 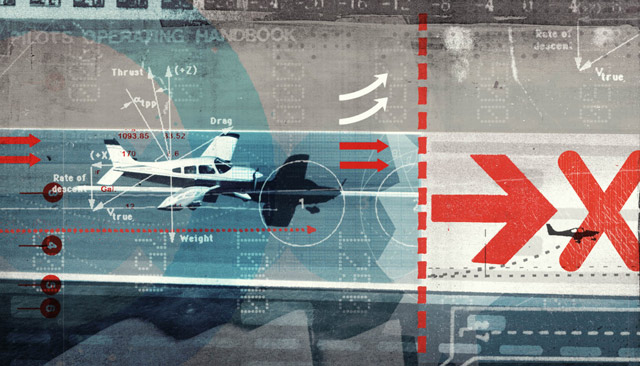 This takeoff made me nervous, even though the performance tables in the pilot’s operating handbook assured me there would be plenty of margin.

Our heavily loaded Bonanza A36 would be taking off from a 2,700-foot, sea-level runway on a calm summer evening about four degrees Fahrenheit above standard temperature. The POH estimated our takeoff roll at full gross weight (and no flaps) at 1,250 feet, and since we were about 150 pounds under gross, I anticipated being airborne by the time the airplane reached midfield.

Engine start, run-up, and the initial part of the takeoff roll went smoothly on the dry pavement, and acceleration felt normal. The rectangular, white-painted fixed-distance markers went by at 1,000 feet, and the takeoff roll was progressing normally. At midfield, the airspeed indicator read 60 knots—more than my preset 56-knot minimum—but not quite rotation speed.

Keeping the airplane in a flat attitude to minimize aerodynamic drag, the 3,500-pound machine finally reached rotation speed and took to the sky with about 800 feet of runway remaining. That was a minimally acceptable margin, I suppose, since the departure path was unobstructed. But it was a lot less than my POH-based calculation had led me to expect.

The FAA, through its knowledge and practical tests, places great emphasis on making sure pilots know how to correctly interpret aircraft performance charts. That’s OK, but it also implies that the charts themselves are accurate predictors of real-world performance—and they’re just not.

The manufacturer-generated numbers are established in ideal conditions by test pilots flying mechanically perfect aircraft, and they get to repeat the tests as many times as they want. There aren’t any dragging brakes, underinflated tires, harried pilots, or engine/prop combinations that put out less than full rated horsepower.

On May 2, 2011, a Gulfstream 650 fatal accident took place during a certification flight in which the test crew attempted a single-engine takeoff at a critically low speed. The lowest possible takeoff safety speed (V2) would allow the business jet to legally operate from shorter runways. The NTSB faulted the flight test team for “persistent and aggressive attempts to achieve a takeoff speed that was erroneously low.”

U.S airlines learned to be skeptical of performance claims a long time ago, and their flight manuals typically build in a 67-percent safety margin over book landing distance requirements. General aviation pilots would be wise to similarly pad the numbers, and take careful note of real-world performance.

The next time you’re flying on a nice day, calculate your minimum takeoff and landing distances using the POH performance graphs or tables, and see how close they come to reality. Then base your aeronautical decisions on actual results, not overly optimistic estimates.