Get the app Get the app
AOPA Members DO more LEARN more SAVE more - Get MORE out of being a pilot - CLICK HERE
News & Media Pilots: A new face in aviation

Pilots: A new face in aviation

Jennifer Delp-Mallet started life in Alaska, where flying is a way of life, and from earliest childhood flying was what she wanted to do. 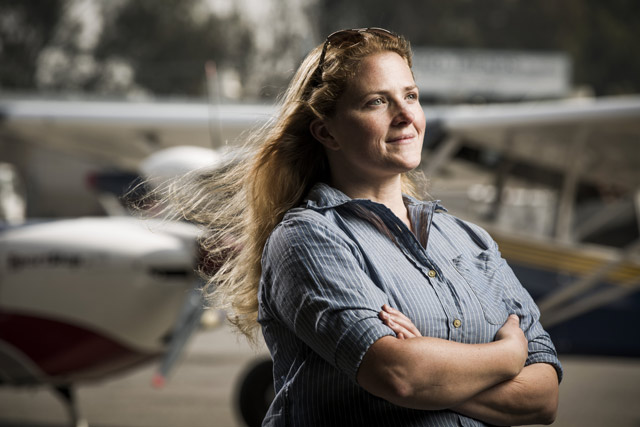 Who | Jennifer Delp-Mallet
Hours | 4,875
Ratings | Commercial single- and multiengine, helicopters
Favorite aircraft | Decathlon and Husky
Extra | “In the little airplanes, you’re one-on-one. You’re inspiring students to want to fly and showing them how to be safe, how to be knowledgeable, how to love aviation.”

Jennifer Delp-Mallet started life in Alaska, where flying is a way of life, and from earliest childhood flying was what she wanted to do. She found Mesa Airline’s pilot program, a two-year college where she could get an associate’s degree in aviation, and go straight into the airlines. It was a grueling experience, but Delp-Mallet was one of two out of 17 graduates who were assigned to fly Bombardier regional jets.

Only 23 at the time, for the next four years she flew jets for Mesa Airlines. Then, when her son was born, she decided
to leave the airlines to be with him. “I tried a few things so I could be at home more. I was a landscaper, I did
medical transcription, but I just missed
flying way too much,” she said. Then she realized she could be a flight instructor, where she could fly and write her own schedule.

“For a lot of people, teaching is just a way to get to the airlines. I did it backwards. I think that made me appreciate it a lot more. I’d seen where you could go with your flying. To me, teaching should be the last step instead of the first.”

Delp-Mallet got her CFI in Watsonville, California, and then went to AeroDynamic Aviation at Reid-Hillview Airport to do spin training. She was surprised to find that at Reid-Hillview, some of the instructors had been there 20 years. Not only did they have longevity, but “they were just so knowledgeable and everybody was excited. The place had some historied magic to it.”

AeroDynamic at Reid-Hillview had been started a half-century earlier by Amelia Reid, one of the pioneer women in aviation. After her death, her son ran the operation and expanded to Salinas, California. A few years ago, Delp-Mallet and a couple of partners bought out AeroDynamic, and in July 2014, they expanded to Monterey, California.

They have been well received at Monterey. “I was very impressed by Monterey. They were excited we were here, saying ‘What can we do to help? How can we make you guys succeed?’ I like that.” Delp-Mallet lives not far away and is home every night with her son. She likes that, too.