Get the app Get the app
Already a member? Please login below for an enhanced experience. Not a member? Join today
News & Media Mentor Matters: Smooth as glass

A primer on hydroplaning

Touching down on a runway with as little as one-tenth of an inch of standing water, slush, or snow can turn a perfectly capable airplane into a machine as uncontrollable as a sled. 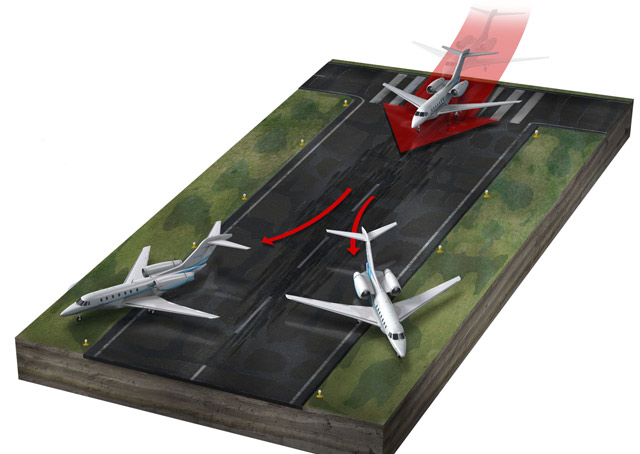 Flying is about physics, the four forces, center of gravity, and the like. Sometimes it’s a bit more pragmatic, like understanding there’s only so much landing runway available to halt an arriving airplane. Of course, there are always conditions outside the pilot’s control that can wreak havoc on a safe landing if he isn’t prepared properly before touchdown.

These include the texture of the runway surface itself, the tire’s construction and tread makeup, as well as the amount of tread on the tire. The grooves on a tire are designed to help move water out of the way at touchdown, to provide the tires a better grasp of the surface. A tire worn so low that the grooves are almost invisible creates one more obstacle to effective braking.

If you must use a non-grooved runway after precipitation has recently fallen, a quick bit of math will offer a pilot a glimpse of what might be expected. Horne’s Formula calculates the speed at which an aircraft on a smooth runway is most vulnerable to hydroplaning. It says V (the velocity at which hydroplaning may occur) is derived by multiplying a constant—nine—by the square root of the tire pressure in pounds per square inch (psi). A jet with 150 psi in the main tires, then, is most exposed to hydroplaning at 12.25 times nine or 110 knots.

There’s just one problem with relying only on Horne’s Formula to avoid hydroplaning. The constant can sometimes vary between six and nine, depending on the type of tire installed. A standard-bias tire might use the constant of nine, while a radial might require a constant of six. The smaller constant translates into a speed much lower than where most pilots might expect hydroplaning. Obviously, too, the numbers used for this calculation also will become error-prone if the aircraft tires are not properly inflated. Check with the service center that installs the tires on your aircraft for specific information.

Planning ahead is a good way to avoid a case of hydroplaning, as is understanding that it can occur beneath any airplane—especially when landing on a non-grooved runway with standing water. If this discussion about hydroplaning possibilities makes you uncomfortable landing on a grooveless runway with standing water, remember that the easiest way to avoid this type of accident is to choose a better runway.

Robert P. Mark is president of CommAvia and he publishes www.jetwhine.com. 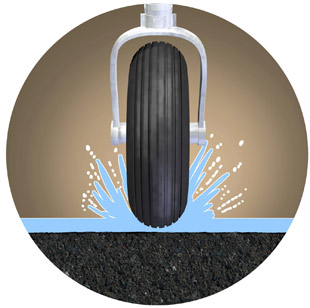 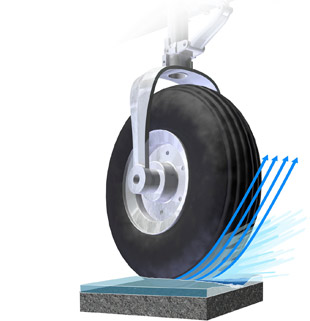 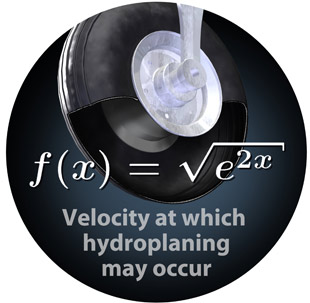 In viscous hydroplaning (inset above), the airplane’s tires ride on water-covered film, such as the rubber deposits left by landing airplanes; this type of hydroplaning is sometimes called “reverted rubber” hydroplaning. Dynamic hydroplaning (circular inset top) involves riding on top of water ponded on the runway—especially a runway without proper drainage or grooved surfaces that promote traction. Viscous or dynamic, however, hydroplaning events can easily lead to runway excursions.

A recent Flight Safety Foundation (FSF) Purdue University student chapter study of 520 runway excursion accidents that occurred between 1995 and 2010 found that one of the top three risk factors was “contaminated runways,” where aircraft braking was reduced. A contaminated runway was one factor in a 2009 Boeing 737 overrun accident at Chicago Midway International Airport. The NTSB said one reason a Hawker 125 slid off the runway at Bridgeport, Connecticut, in 2001 was “the slush-covered runway, which resulted in hydroplaning.”

While talk of contaminated runways seems to make perfect sense on the ground, what actually happens at touchdown is not nearly so well understood.

Because deadly runway excursions—whether they occur during landing or following a high-speed aborted takeoff—often begin with a contaminated runway, it’s important to realize that touching down on a runway with as little as one-tenth of an inch of standing water, slush, or snow can turn a perfectly capable airplane into a machine as uncontrollable as a sled.

Even worse, there is very little pilots can do once hydroplaning begins—except hang on for dear life. The only real defense against hydroplaning is choosing a grooved runway that allows water to drain off the surface almost as soon as it hits. A quick look at the appropriate Airport/Facility Directory will detail your destination’s runway—for example, RWY 16-34: H5001X150 ASPH–GRVD.

The good news is that you don’t need an in-depth understanding of physics or math for hydroplaning to make sense, because essentially the same result is possible in an automobile under similar conditions. The wheels of an aircraft need to solidly connect with the runway surface in order to create the friction necessary to stop the aircraft when the brakes are applied. During a hydroplaning event, water on the surface of the runway interferes with that much-needed bond. Not only is friction reduced in a hydroplaning event, the wheels of the aircraft actually can be lifted completely up off the surface of the runway. That explains why pushing harder on the toe brakes as the end of the runway approaches has essentially no effect.

While hydroplaning can assume a number of forms, commonly called dynamic and viscous, some researchers claim that both normally occur at the same time. Let’s be practical again—if a pilot encounters hydroplaning, precisely naming the event is probably low on his or her priority list. That said, the potential for viscous hydroplaning is something for which a pilot can be on the lookout, especially with moisture on the runway. Viscous hydroplaning occurs on smooth surfaces, such as those coated with a substance—in addition to the water, of course. The most common element responsible for viscous hydroplaning and found on a runway is excessive deposits of old rubber, such as in a touchdown zone, where tires normally spin up from zero to 100 knots or more in the blink of an eye—leaving behind a trail of burned rubber.

In a true hydroplaning scenario, the aircraft’s stopping ability is affected by a number of other factors in addition to the type and depth of the runway contaminant.