Even now, with the final coats of paint long since dry and the new runway having endured its first New England winter, the word “expansion” made Ann Pollard wince. As vice president of Shoreline Aviation, Inc., the fixed-base operator at Marshfield Municipal Airport – George Harlow Field, Pollard has been explaining for more than a decade that the runway reconstruction—while it did extend the safety zones and added 900 feet of paved length in the name of safety—is not and never was intended to be an “expansion.”

“And that was a really a critical part,” Pollard explained. “There was a lot of misunderstanding about the project. People thought that suddenly we would have JetBlue coming to Marshfield.” 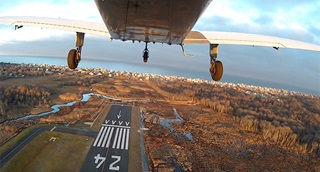 With a total of 3,900 feet of paved runway, of which 3,600 feet can be used for takeoff and 3,300 feet for landing (safety overruns account for the rest), there remains no scheduled air service at Marshfield, though the airport hosts a diverse array of operations including charters, flight training, fish spotting, emergency response, business, and recreational. Shoreline Aviation mechanics work on pistons, turboprops, and light business jets. The crew car fleet includes a Jeep Wrangler with a beach pass, a Smart Car, and a van—all clean, low-mileage models, all part of a larger effort to make the airport an inviting destination along the South Shore between Boston and Plymouth, Massachusetts.

Drop in for an afternoon and they'll be sure to recommend the Fairview Inn, which offers beachside dining and lodging and is owned by Paul and Betty Disch, who will happily host visiting pilots and passengers. Paul Disch, whose family has made several improvements to the property in recent years, said his business depends on repeat visitors, and he's willing to haggle a little to keep pilots (and other guests) happy.

Light aircraft were unable to access Marshfield for much of 2014 as construction closed the airport for about three months, and disrupted operations for longer than that. Shoreline Aviation staff and tenants scattered to nearby airports as the project was completed, though construction was only a portion of the overall effort. Rebuilding the runway took more than 12 years and more than $15 million in funding (most of it from the FAA), and involved a more detailed and exhaustive process of reviews, approvals, planning, and monitoring than many would have patience for.

Shoreline Aviation President Keith Douglass can still manage a smile as he describes two dozen turtles being fitted with GPS tracking devices so biologists could monitor their comings and goings and confirm that the runway (including that extra pavement) and taxiways would not interfere with the turtles' ability to find food, breed, and whatever else turtles do.

“We have a lot of turtle replication areas out here,” Douglass said, smiling, his sense of humor still, apparently, intact. 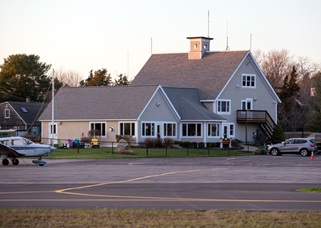 Archaeologists uncovered the remains of a farmhouse dating to Pilgrim times, and were quite enthusiastic, Pollard said, about the various items they unearthed during what became a two-year dig. “They were very excited about the finds.”

Assembled together, all of the federal, state, and local officials involved, combined with the construction crew, consultant, biologists, archaeologists, airport staff, and others involved in the project, would require more than one bus to get to Marshfield’s scenic shoreline for lodging and dining, just a couple of miles east. An exact number of those involved could not be calculated, however. Douglass conceded there were times when it was tempting to throw in the towel. His FBO is a tenant of the town-owned airfield first paved in 1968, though the staff had to take on leadership of the renovation (which also included an update of the FBO facilities, funded in part by government grants and in part by Shoreline Aviation itself). At times, they questioned the wisdom of working so long and so hard to make it all happen.

“I believe it was 20 years overdue,” Douglass said of the runway rebuild. Without the overhaul, Marshfield might well have continued on a path of decline right out of existence, as many airports in the region have done in the past decades—a point driven home by reviewing a 50-year-old sectional.

“It needed to be done,” Douglass said, and the FBO, which operates the airport on Marshfield’s behalf, was really the only option. “It’s state-of-the-art. It’s a brand-new airport from the ramp out. It’s not that often that you see an entire, brand-new airport. We have that, now.”

Naturally, the first winter with the new pavement in place was brutal.

Pollard said the staff has learned a great deal over the past decade about how to navigate the complexities of a major construction project in the middle of a marshy wetland dotted by protected turtles and 400-year-old artifacts. One important aspect of the overall strategy remains in place: forging and maintaining strong ties to the community. That strategy goes beyond explaining, patiently, to neighbors that there are no Boeing 737s on the way, that the same aircraft that came and went before the runway rebuild will be coming and going after. 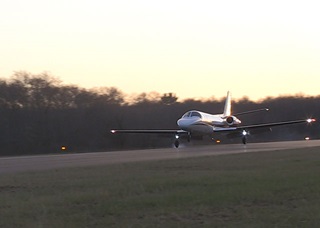 The community relations strategy extends to what has become an annual “Safety Day” event that draws dozens of public service and emergency management agencies to the airport to display vehicles and meet with visitors. Even on a regular day, the staff will offer a tour of the newly renovated terminal building (which retains a classic New England architecture and contains vestiges of an old barn within it). There is a viewing area overlooking the ramp, chairs circled around a bronze plaque set in stone that commemorates Charles Lindbergh’s famous flight and the fact that Marshfield was the last bit of land he saw before reaching Europe.

“We teach young people how to fly, and we start them on careers,” Pollard said, adding that the flight school typically loses money, but remains an important part of the business. “That’s always been a passion for us.”

The airport is also an important asset to local law enforcement and emergency management officials, as Harbormaster Michael DiMeo explained during a short tour of the Massachusetts Bay aboard the local police patrol boat. Shoreline Aviation has become a de facto air wing for DiMeo and his fellow officers, able to respond quickly to distress calls, locate those affected, and talk directly to the patrol boat that has 121.5 painted on the roof and is equipped with an aviation radio installed by Shoreline Aviation. 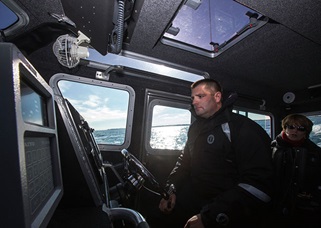 In recent years, DiMeo said, the arrival of great white sharks drawn toward coastal New England by a booming seal population, has created a new mission that is also made much easier by the cooperation of the airport and its aircraft: shark spotting. And just as important, getting eyeballs on reported sharks that usually turn out to be other kinds of fish. Passing aircraft can be contacted by radio; Shoreline Aviation is willing and able to launch a flight if needed.

There’s “hysteria on the beach sometimes, people getting out of the water,” DiMeo said, adding that nearby aircraft can quickly get eyes on the fish in question and communicate directly with the police boat. In case of fires, mishaps, or natural disasters, that communication capability is a “force multiplier,” DiMeo said. He makes regular visits to the airport, and said the close relationship has benefits for all concerned.

Pollard said the value of community support and goodwill cannot be overstated, and has been cultivated with care. That, along with a few tips on grant applications, wetlands construction permits, turtle behavior, and archaeological excavations, is among lessons learned in the past decade that Shoreline Aviation’s staff would be happy to share with other airports facing their own challenges.