Get the app Get the app
Already a member? Please login below for an enhanced experience. Not a member? Join today
We will be performing maintenance on our systems Sunday, 5/22/2021, beginning at 12:00 A.M. ET and ending at 6:00 A.M. ET. During this time, you may experience intermittent service outages. We appreciate your patience.
News & Media Virtual flights, real communications

Clouds, rain, and the threat of thunderstorms curbed operations at Leesburg Executive Airport in Virginia April 3—but inside the terminal, the frequency was alive with activity.

In the offices of flight simulation software company Mindstar Aviation, Av-Ed Flight School instructor Greg Ashby was acting as air traffic control for the virtual flights of real pilots in the region. Monitoring three flights on a large-screen, radar-like display, he toggled between frequencies giving instructions for landing at and departing the airport, located within the Washington, D.C., Special Flight Rules Area.

Pilots at Internet-connected Redbird simulators in the National Capital Area Flight Simulation Network can now practice their communications skills in a virtual environment created by Mindstar, where pilots may see one another as traffic in the windscreen and communicate the way they would in real-world scenarios. From March 20 through April 19, workers at Mindstar headquarters are manning tower and approach frequencies in this virtual world; the company plans to expand the program to other regions and hopes the technology will empower instructors by connecting them to students even when they aren’t physically there.

Seated at the AOPA National Aviation Community Center in Frederick, Maryland, AOPA Aviation Activities Specialist Brenda Tibbs flew a Redbird Jay desktop simulator into the virtual airspace on a Friday to help demonstrate the software. Her groundspeed, squawk code, direction, and N number appeared on Ashby’s screen in Leesburg, where he was able to measure her distance and direction from the Leesburg airport with a drag of a mouse. User-friendly features like these enable pilots to play the role of controller without extensive training, according to Mindstar Aviation President and CEO Stasi Poulos. When his company rolls out the AirspaceVR communications software to a wider market, he said, flight instructors will be able to act as air traffic control for one or many students, even from their home computer.

With software that works on Microsoft Flight Simulator as well as Redbird aviation training devices, Mindstar plans to expand AirspaceVR beyond Washington, D.C., as a subscription. The company also aims to develop similar networks in other areas of the country by training leaders in those areas to take on the role of ATC.

In the capital region, aircraft from a Cessna 172 to a Beechcraft King Air 350 roam the virtual airspace. While Ashby easily handled the three pilots on the radio that Friday, Poulos said activity increases on the weekends. “Tomorrow being a Saturday, sitting in here makes you sweat,” he said.

Billy Winburn takes off from Front Royal Airport in Virginia. The transponder and pitot-static checks for his G1000-equipped Cessna 172 will expire at midnight, and so he’s flying the aircraft to New Market where the owner of his radio shop has promised to do the tests right away—but only if Winburn can meet him promptly at 1600Z. With the clock ticking, how will Winburn handle it when weather isn’t as forecast?

Winburn, president of Mindstar Community, demonstrated his handling of the “Shenandoah Sortie” scenario in the safety of a Redbird FMX at Av-Ed Flight School April 3. The scenario, part of Mindstar’s month-long Pilot Proficiency Demonstration sponsored by the Society of Aviation and Flight Educators and the Experimental Aircraft Association, requires pilots to put learning into practice and is designed as a follow-up to two live webinars offered each week throughout the month. Anyone may participate in the webinars, and the scenario may be practiced on simulators in the National Capital Area Flight Simulation Network.

The Pilot Proficiency Demonstration follows a progression Mindstar calls “learn, do, fly”: Learn in a webinar or classroom environment, practice in a simulator, and then fly for real, Poulos said. “If we don’t do all three of those in a progression, … there’s no building block,” he said.

To that end, AirspaceVR allows students to practice communications procedures for the security-sensitive airspace around the nation’s capital before keying the microphone of a real airplane. AOPA is participating in the National Capital Area Flight Simulation Network and recently invited Mindstar to brief staff members on using AirspaceVR for pilot proficiency in Redbird devices in the AOPA National Aviation Community Center.

Mike Gilbert, chief flight instructor of Aviation Adventures’ Leesburg office, said the technology represents a “paradigm shift” for flight training: His school introduces simulator work right away, he said, “because the first time they get in the airplane, they’re in the airspace.”

A busy nontowered airport within the Washington, D.C., SFRA, Leesburg Executive Airport has a designated squawk code and special procedures. Gilbert said communicating in the simulator—with people there to help them, not intimidating government employees—takes some of the pressure off students and gives them a measured exposure to other aircraft in the traffic pattern.

Mindstar Aviation develops software such as avionics for Microsoft Flight Simulator, which was further developed into Lockheed Martin Prepar3D. Because customers may purchase the software for home use or use it in training devices with Prepar3D like Redbird’s, Mindstar technology can be used in a formal training environment or from the comfort of one’s home.

Ashby, who uses AirspaceVR as an instructor and controller and helps with outreach, open houses, and more at Mindstar, said he has a radar screen setup at his home as well. The radar interface lets him call up airspace, terrain, minimum altitudes, procedures, and more from Mindstar’s navigation database, allowing him to track multiple pilots’ altitude, course, and performance on approaches.

Unlike a simulator service like PilotEdge, which provides ATC staffing for designated areas, continuing to staff controllers for the expanding network is not part of Mindstar’s long-term plan. Rather, the company envisions instructors like Ashby with setups at home acting as ATC for students. It’s an arrangement the company says will save instructors the drive to the airport many days, and will allow them to work with multiple students at once—saving them gas costs and providing additional revenue. It also helps students build confidence to take the controls of the simulator solo, Ashby added: “It gives them a better sense of realism in a controlled and safe environment,” he said.

Winburn said ultimately the network could connect pilots from halfway across the country for a lesson linking online learning with doing. By making it easy, accessible, and affordable for pilots to meet, he said, the software allows pilots to immerse themselves in aviation more frequently, instead of waiting until they can break away to the airport.

“It’s as much of a gathering place as it is virtual airspace,” he said. 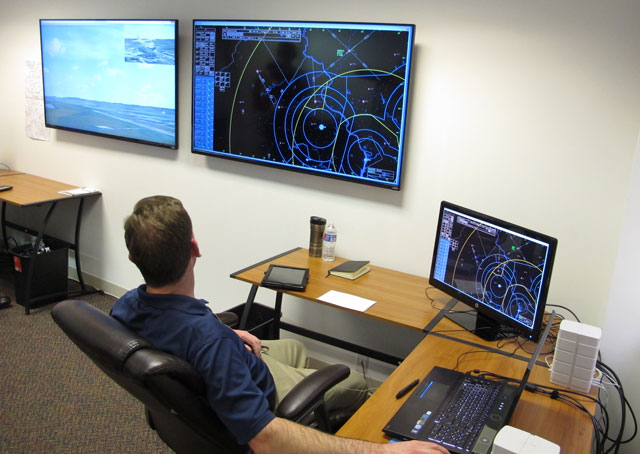