Get the app Get the app
Already a member? Please login below for an enhanced experience. Not a member? Join today
News & Media FreeFlight releases ADS-B View 2.0 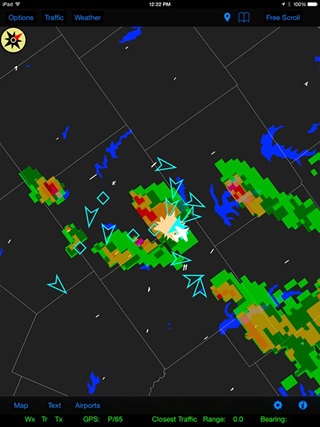 FreeFlight Systems has released ADS-B View 2.0, a free iPad app that displays to pilots Automatic Dependent Surveillance-Broadcast graphical weather, traffic, and textual data that has been received by FreeFlight’s RANGR ADS-B In systems. The data is transmitted to the tablet via Wi-Fi, and overlayed on the ADS-B View map.

“As with the previous version, and in keeping with the ‘free weather and traffic’ philosophy of ADS-B, the app is available free of charge from the Apple store and works with any FreeFlight Systems ADS-B In system,” said Tim Taylor, FreeFlight’s president and CEO.

Graphical weather can be displayed in a looping mode to allow users to view weather changes over time. Users can configure the map to show runways, roads, lakes, and state and county lines and can return to previously viewed areas easily via bookmarks. The map view is fully scrollable, or the aircraft can be centered on the map—either north up or track up. METARs are displayed textually.

A new graphics engine in version 2.0 provides increased responsiveness to user requests and offers full map rotation capability as well as smoother scrolling. In addition, multiple tablets can connect to the same transceiver, which was not possible with ADS-B View 1.0.

Technical Editor
Mike Collins, AOPA technical editor and director of business development, died at age 59 on February 25, 2021. He was an integral part of the AOPA Media team for nearly 30 years, and held many key editorial roles at AOPA Pilot, Flight Training, and AOPA Online. He was a gifted writer, editor, photographer, audio storyteller, and videographer, and was an instrument-rated pilot and drone pilot.
Go to Mike Collins's Profile
Topics: Gear, Avionics, Aircraft Electronics Association