Perhaps you’ve flown into Salinas Municipal Airport (SNS) for the California International Airshow, which is held at the airport each fall and marks its thirty-fifth anniversary this year—or for lunch at the Landing Zone Restaurant in the terminal building.

In May you have an opportunity to fly in for the first AOPA Fly-In held in Northern California. And there are a number of additional activities surrounding the event that could cause you to consider making a weekend of it.

Golfers arriving on Friday can play in a tournament at the Salinas Fairways Golf Course, literally on the airport—the seventeenth tee and the fourteenth green bracket the Runway 13 threshold. The Monterey Bay Chapter of The Ninety-Nines, which marks its fiftieth anniversary in August, will present the best-ball scramble. An entry fee of $40 per player includes 18 holes of golf, a cart, and a chance to win prizes. To sign up to play, email the chapter president.

“The condition of the course is excellent, especially the greens,” said Ross Kroeker, course manager and head pro, “and we’re the best-priced course in the area as well.” The course was recently rated a Top 10 value golf course of the week by Golf Advisor, he said. 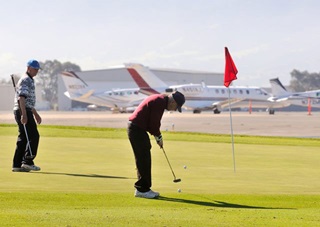 Kroeker said the airport is a good neighbor. “Most people think it’s kind of cool. I know I never tire of seeing airplanes taking off and landing. Who gets tired of that?” Among the course’s most popular days, based on reservations, is the weekend of the California International Airshow, he added.

That airshow, held at Salinas each fall, marks its thirty-fifth anniversary this year. “Over the years it has grown into one of the nation’s finest airshows—and it’s not just us saying that, it’s the International Council of Air Shows,” said Bruce Adams, executive director. The show, which has contributed more than $8 million to local charities, is a success because of 1,000 volunteers who work throughout the year, he said. Some of those volunteers will be parking aircraft and cars at Salinas during the AOPA Fly-In.

A highlight of the party will be a very special screening of National Geographic’s new film, Living in the Age of Airplanes, which weaves together the profound ways in which aviation has transformed our lives. It takes audiences on an epic journey through 18 countries and across all seven continents as it presents a unique perspective on how the airplane has changed the world. It is narrated by actor and pilot Harrison Ford, and features an original score by Academy Award-winning composer and pilot James Horner (Avatar, Titanic).

Living in the Age of Airplanes was produced and directed by Brian J. Terwilliger (we all remember One Six Right). And Terwilliger will be on hand to introduce the film and share his story. You can view the trailer online.

Register for the Barnstormers Party in advance to save money—it’s $15 before May 15, and $20 at the door if tickets remain available.

Sleep under the wing, or in a discounted hotel 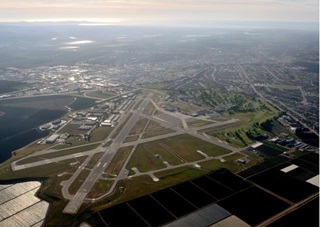 When the Barnstormers Party winds down, you can pitch a tent under your wing—or behind the tail, if your airplane’s a low-wing. Camping will be allowed on the field, with spots available on a first-come, first-served basis. You must reserve a camping spot by email. For more information, download the aircraft camping information sheet.

Camping is not required, of course. A number of area hotels are offering discounted rates to pilots attending the Salinas Fly-In. Several of these properties are in the charming town of Monterey, which nestles beside Monterey Bay about 20 miles and a half-hour’s drive away. You can see the waters of the Pacific Ocean from the Salinas traffic pattern.

Pulitzer Prize-winning author John Steinbeck was born in Salinas, and his 1945 novel Cannery Row is set in what then was a gritty, industrial Monterey street during the Great Depression. Today, instead of sardine canneries, the area—now known as Cannery Row, after Steinbeck’s book—is home to a variety of restaurants, shops, and the world-class Monterey Bay Aquarium.

Monterey and adjacent Carmel-by-the-Sea are a worthy side trip if you want to extend your Salinas Fly-In experience into a weekend getaway. See the additional information available online.

The AOPA website has been updated with a lot of new information, including the seminar schedule and an updated exhibitor listing. Learn more and RSVP for AOPA’s Salinas Fly-In today.

Technical Editor
Mike Collins, AOPA technical editor and director of business development, died at age 59 on February 25, 2021. He was an integral part of the AOPA Media team for nearly 30 years, and held many key editorial roles at AOPA Pilot, Flight Training, and AOPA Online. He was a gifted writer, editor, photographer, audio storyteller, and videographer, and was an instrument-rated pilot and drone pilot.
Go to Mike Collins's Profile
Topics: AOPA Events, Fly-in, Travel