Get the app Get the app
AOPA will be closed July 4th, in observance of the Independence Day holiday. We will reopen at 8:30 am ET on Tuesday, July 5.
News & Media Superior introduces diesel 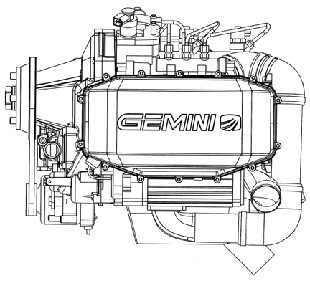 Superior Aviation joined the diesel engine fray with its acquisition of the Powerplant Developments engine now called Gemini. Superior plans to bring the 100-horsepower engine to market in early 2016. While initial plans are for the 100-series engines to find their way into light sport aircraft, the product line will be expanded all the way up to 550 hp for Part 23 airplanes in coming years, according to Tim Archer, Superior Group CEO.

The three-cylinder, horizontally opposed design has been in development by United Kingdom-based Powerplant Developments for many years. Development engines have accumulated more than 10,000 flight hours on airships.

Archer previously served as CEO of Powerplant Developments before returning to Superior Aviation, which he had headed in the 1990s.

Each Gemini cylinder includes two pistons that work together to create the compression necessary for diesel combustion. Direct fuel injection is via a simple common rail system. The engine is digitally controlled and includes a supercharger. The engine turns at about 4,000 rpm at cruise, but is geared down to a prop rpm of 2,100. Although at 159.5 pounds it weighs some 20 pounds more than a comparably powered avgas/auto fuel burning Rotax 912iS, the Gemini engine will burn about 20 percent less fuel for an equivalent power output, according to Superior officials.

The engine is about 30 percent smaller than comparable avgas engines and contains fewer parts. Displacement equals about 100 cubic inches with a 20-to-1 compression ratio. Superior officials claim an LSA with 35 gallons of fuel can fly more than 1,000 nautical miles with a Gemini engine. A Rotax-powered airplane with the same fuel would be have a range of less than 800 miles, and Lycoming and Continental engines would have shorter ranges yet.

Superior hopes to bring engines in the 200-hp range to market by 2017 and larger engines within a few years of that.

Archer said the pricing goal was for a retail price of $24,900 and a 2,000-hour time between overhauls for the 100-series engine. The engines will be built at Superior Air Parts’ Dallas facility.

Contributor (former Editor in Chief)
Contributor and former AOPA Editor in Chief Tom Haines joined AOPA in 1988. He owns and flies a Beechcraft A36 Bonanza. Since soloing at 16 and earning a private pilot certificate at 17, he has flown more than 100 models of general aviation airplanes.
Go to Thomas B Haines's Profile
Topics: Technology, Sun 'n Fun, Events