Get the app Get the app
Already a member? Please login below for an enhanced experience. Not a member? Join today
News & Media Baker delivers association update over coffee and donuts 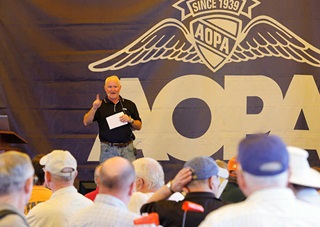 There's a fundamental law in aviation that if you offer coffee and donuts, pilots will come. That was true April 22 for more than 250 AOPA members who came to see AOPA President Mark Baker give an update on the association at Sun 'n Fun.

Baker highlighted positive actions in support of the pilot community, legislative wins, and even some news on Automatic Dependent Surveillance-Broadcast (ADS-B). Top of mind for him, as well as most in attendance, was third class medical reform. Jim Coon, AOPA’s senior vice president of government affairs and advocacy, came on stage to give a detailed picture of where he thinks the issue stands today. “All of our efforts are on the legislative side at this point,” he said. Coon said he believes that Pilot’s Bill of Rights 2 can be successful, but that the legislative calendar really only enables it to happen between now and October.

Coon stressed that the best way to help is to reach out to your members of Congress and ask them to co-sponsor the bill. AOPA has made that easy for members. Simply click on the website and fill out the form to make sure your representatives in Washington, D.C., know you support medical reform.

The issue is obviously quite important for many members. Out of seven questions at the end of the session, five were on this issue.

Third class medical reform may be AOPA’s most important advocacy initiative, but it’s one of many issues the association is working on. Baker touched on everything from aircraft certification reform to stops by law enforcement to ADS-B equipage. On the issue of the Customs and Border Protection’s Air and Marine Division stopping law-abiding pilots, Baker declared a win. Meetings with top officials in the agency resulted in a change in policy, and reports of stops went from more than 50 to zero. We’ll remain vigilant, Baker said, but for now the issue appears to have died down.

Many aircraft owners see the ADS-B Out mandate of Jan. 1, 2020, approaching quickly. Based on recent industry announcements and knowing the costs of manufacturing and certification, Baker said he thinks the cost of certified ADS-B Out units won’t come down much more. AOPA supports ADS-B, he said, and the benefits that exist today should encourage everyone to equip. “I think the juice is worth the squeeze,” he said.

Advocacy is critically important, but it requires an active pilot community, something AOPA is highly engaged with. Baker touched on two programs in that area—flying clubs and Rusty Pilots. Both fall under a new banner called You Can Fly. Far from simply offering materials and support, AOPA has taken a more active role by putting people on the ground in certain areas to help pilots step through the process of starting a flying club. It’s all about making access to airplanes at affordable levels, Baker said. You Can Fly ambassadors will be showing up in the attention-grabbing Reimagined Cessna 152 to show people that flying can be fun and affordable.

A vibrant network of flying clubs is a great way to welcome back pilots who have left the community. Rusty Pilots—a seminar program that started last year—is the catalyst to make that happen. It asks people to come back to the airport and rediscover flying. In its first year, AOPA and participating flight schools held 65 seminars, resulting in more than 500 pilots becoming current again. Baker said that program will double this year.