AOPA Foundation thanks pilots for giving back 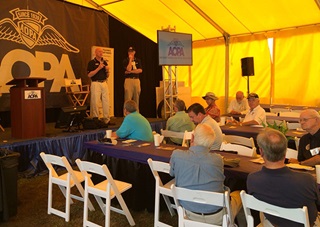 Dozens of AOPA Foundation supporters gathered April 24 at the Sun 'n Fun International Fly-in and Expo in Lakeland, Florida. They were joined by foundation staff who had a simple message: Thank you.

AOPA Foundation Executive Director Jim Minow ran through just a small laundry list of the many AOPA programs the group supports. Among them are Rusty Pilots, the AOPA Fly-Ins, AOPA Live, and of course, the AOPA Air Safety Institute.

George Perry, senior vice president of the Air Safety Institute, said it simply wouldn’t be possible to do the great safety training they do without donor support. He said the support is even more important because success is literally a non-event. “It’s someone who lands safely that we never hear from,” he said.

Members interested in supporting the foundation’s mission of improving aviation safety, growing the pilot population, preserving community airports, and spotlighting work others do to benefit aviation can visit the website. There they can learn more about the group’s work in each of those critical areas, as well as the variety of ways in which pilots can do their part.