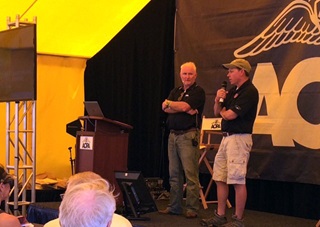 Rep. Sam Graves (R-Mo.), an avid pilot and co-chair of the House General Aviation Caucus, joined Baker to discuss topics that ranged from FAA reauthorization to third class medical reform at the event, which allowed pilots to take a break from the heat with free ice cream.

Calling third class medical reform “the single biggest way to grow general aviation in the short term,” Baker noted that expanding the sport pilot driver’s license provision to more pilots is AOPA’s top legislative priority. He expressed frustration at the pace of regulatory action, and urged pilots to contact their senators and representatives about legislation that would expand the sport pilot medical standard to more types of flying.

“The legislative path is where your cards and letters matter,” he said.

Graves also urged pilots to engage with their representatives in Congress. He briefed pilots on legislative efforts to pass medical reform—through the Pilot’s Bill of Rights 2, a standalone bill, and in the FAA reauthorization—and emphasized the importance of the GA Caucus, whose size has made it a “formidable force” when it comes to GA issues, he said.