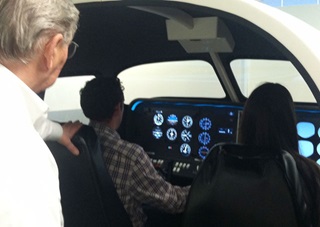 Instructors at Nashua Flight Simulator are paid to make pilots sweat to keep them safe. Lately, they’ve even taken to giving some particular nonpilots a taste of what it’s like to be a single pilot coping with a failed gyro in the clouds, trying to follow and respond to what a controller is saying in the middle of all that.

It is, in fact, future air traffic controllers who are being made to sweat, now.

“These kids have said that … they had no concept of when they were issuing their instructions and vectors and directions in their sim labs, what was happening on the other side of the screen, or the other side of the mic,” said Stephen Cunningham, the owner of Nashua Flight Simulator who was inspired by stories of flights gone wrong in part because controllers did not understand exactly what the pilot had to contend with, and what is possible in various contexts. Cunningham said that familiarization flights—if even still offered to FAA controller trainees—have typically involved riding the jump seat of a transport aircraft; he wanted future controllers to see what happens in a cockpit with much less automation available.

Just down the road (Nashua Flight Simulator has in recent years been based at Manchester-Boston Regional Airport in Manchester, New Hampshire), the School of Aviation Sciences at Daniel Webster College (with facilities both next to and on Boire Field in Nashua, New Hampshire) has dozens of students studying air traffic management—only a few of them are pilots, fewer still hold instrument ratings. Cunningham has lately been giving them a taste of what it’s like to be a pilot, first flying normally in the system, then coping with an emergency. They observe a simulated flight, and then try their own hand at a simulated cockpit challenge complete with ATC interaction.

Nashua Flight Simulator instructors have 75 scenarios to choose among, some more diabolical than others. Vacuum pumps are particularly susceptible to failure, though engines can give out, also, in the safety of simulated instrument conditions.

“I paraphrase, ‘aviate, aviate, aviate, then navigate and communicate,’” Cunningham said in a telephone interview. Among the lessons learned: There may be a very good reason why a pilot does not respond quickly to instructions. “The most critical thing that the controllers have to understand… (the pilot) may be in trouble and he’s trying to fly the airplane.”

Students come away impressed by how much concentration is required in the task-saturated environment of single-pilot IFR, and what a stray question from ATC can do to that concentration. He said controllers too often give long clearances, or similarly verbose instructions, to pilots already pushed to the limit by circumstances the controller may not even be aware of.

“I wanted them to see to give it out in small doses,” Cunningham said.

Glenn Carter, dean of the School of Aviation Sciences, arrived at Daniel Webster in August, and enthusiastically supports the program Cunningham crafted with Peter Wyman, an assistant professor at the college.

“I was very impressed with it,” said Carter, who came to Daniel Webster by way of Embry-Riddle Aeronautical University and the U.S. Navy. “I didn’t see anything like this anywhere else. This would actually be a major safety factor for everybody if this was common practice.”

Cunningham said a trial run in 2014 gave 15 seniors simulator sessions, including a demonstration and a chance to get their own hands on the controls, at least the autopilot and navigation controls. Another 150 will soon follow. Carter said he fully intends to make the program a permanent offering in the air traffic management program.

Students also learn from the pilot’s perspective the power of collaboration and fine-tune their ears for the subtle signs of trouble that pilots may not be able to communicate due to task priorities, hypoxia, fear, or other causes. “See if you can sense something wrong in their voice,” Cunningham coaches. Another point gets hammered home: “This is a partnership.”

Among the typical responses are comments such as “That’s coming fast,” Cunningham said, and “‘How do you do all that?’”

Cunningham hopes others will take the idea and run with it. If everyone does just that, it will suit him just fine.

“I would hope to see that other people adopt the process,” Cunningham said. “There’s really no pride in authorship in this.”