Get the app Get the app
AOPA will be closing at 2:30pm ET Wednesday, November 23rd, and will remain closed Thursday and Friday in observance of the Thanksgiving holiday. We will reopen Monday November 28th at 8:30am ET.
AOPA Members DO more LEARN more SAVE more - Get MORE out of being a pilot - CLICK HERE
News & Media Light the way 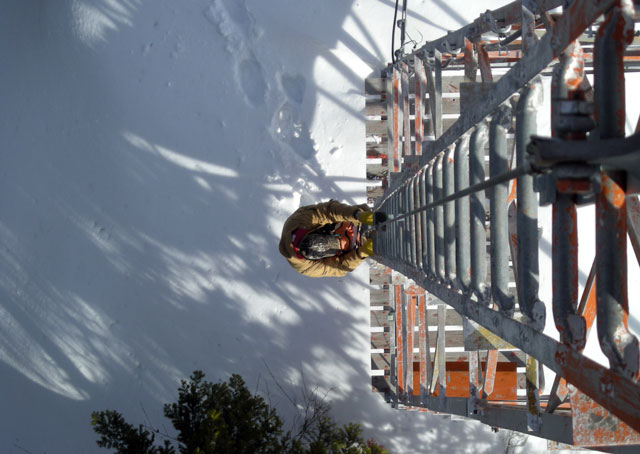 Crossing the Continental Divide west of Helena, Montana, air mail pilots of the 1930s were guided through MacDonald Pass by the flashing white (and red dash-dash-dot) of beacon 49, base elevation 6,415 feet, rising above the rugged terrain to mark safe passage between peaks topping 7,000 feet. 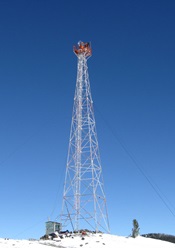 Pilots got a lot of information from those lights. White flashes combined with red told them they were on course; the red Morse Code identifier which denoted each location could not be seen if the pilot had strayed from the route. No lights at all meant “turn back” because bad weather was ahead.

Today, modern pilots equipped with VORs and GPS unheard of in 1935 when the MacDonald Pass beacon was first lit still use that tower—and 16 others scattered across the state—in part, to find their way at night, and also to gauge the weather ahead the same way it has been done since the days when mail was flown by derring-do and little else.

Maintaining those beacons is a bit of a chore, particularly in winter when the two men responsible for beacon maintenance—Mike Rogan and Ken Wilhelm of the Montana Department of Transportation Aeronautics Division, Airport/Airways Bureau—don snowshoes and then climbing gear to reach the tops of the towers, some more than 100 feet above rugged terrain.

It is a job that has been done like clockwork for 80 years, passed from one generation to the next, each of the remaining beacons still visited every three to four months. Bulbs are replaced as needed, though the advent of metal halide bulbs has reduced the burnout frequency. Rogan said in a telephone interview that when he first started his job in 1984, Strawberry Beacon (located near Manhattan, Montana) ran on propane generator power.

“That site I had to go to every month,” Rogan said. The generators needed oil changes and a switchover before he could climb the tower to service the lights and apparatus that automatically switched out the bulbs in case of burnout. Strawberry, like the rest of the beacons, has been on commercial power since 1987, though Rogan and Wilhelm must still visit regularly to check the lights and maintain the slip ring and carbon brush that carries power to the top. Rogan noted that he had just returned from such a trip to another beacon, and noticed that the Westinghouse motor that rotates the 24-inch reflector was date-stamped Nov. 1, 1934. 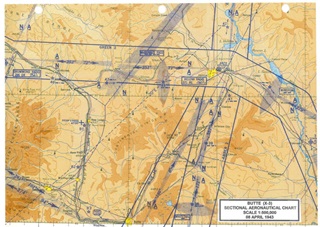 “I’ve never replaced a carbon brush or a slip ring,” Rogan said. They might last forever “as long as you do the preventative maintenance.”

Still, there is both expense and hazard associated with this work. Most towers are just over 50 feet tall, though the tower at Canyon Resort rises 110 feet above the base. Fear of heights would certainly get in the way, Rogan confirmed.

Rogan and Wilhelm pair up for safety in the winter, though in the summer they’ll brave a tower visit alone—with a personal GPS emergency beacon in hand in case of need.

The most difficult beacon to reach?

“It depends on how you view difficult,” Rogan said. “Lookout Pass on the Montana-Idaho border is difficult in the winter time … we get probably eight to 10 feet of snow up there.”

A combination of snowmobiles and snowshoes puts that site in reach, but Rogan said Hardy Creek stands out in his mind as perhaps the most difficult challenge. 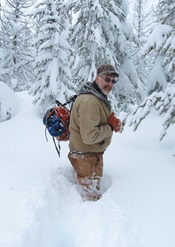 “It’s a pretty steep hike walking up into it,” Rogan said. “You usually end up seeing bighorn sheep around the base of the tower up there.”

Bears, snakes, wolves, and insects are also among the wildlife encountered, Rogan told The Wall Street Journal in 2014; passersby sometimes use a beacon for target practice.

Each of the metal halide bulbs are replaced annually, which saves money compared to the old days when incandescent bulbs made specially for beacons required replacement every visit—four bulbs in each, costing $50 or $60 apiece. Ongoing expenses include the electricity to run the beacons, the staff time required, and gas for the various vehicles required. Rogan said those expenses sometimes get looked at with a hawkish eye, with temptation to shut down the old beacons.

“They talk about it every once in a while, you know,” Rogan said. Yet Montana pilots, every time they’ve been asked, resoundingly support maintaining the old beacons. “It all comes down to the users.”

Rogan, a commercial pilot himself and also an airframe and powerplant mechanic with inspection authorization, said a fellow pilot who flies for a corporation uses a distant beacon to get his first gauge on the weather: “'I can see the light, and I know I don’t have to file IFR,'” Rogan quoted. 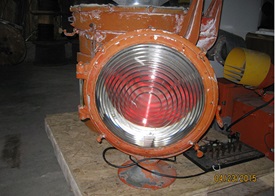 At night, VFR pilots may rely on the beacons to guide them through terrain, and confirm the weather ahead remains flyable. “You get to one beacon and you look on to the next, if you can’t see it you pretty much know you can’t go on VFR into that area.”

For Rogan, the charm of this particular part of his job is a combination of its challenges, its service to pilots, and its connection to history—a living link to a bygone age when air mail pilots navigated between Minneapolis and Seattle following a network of beacons, each flashing its unique Morse code identifier, marking safe passage and location at once.

About four years ago, the FAA published a chart with a glaring omission.

“It’s kind of funny,” Rogan recalled. “We were looking on the Great Falls sectional and the beacons were gone. I got a hold of the FAA … what’s going on here?” 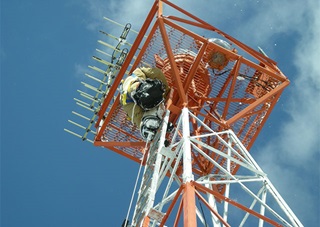 Rogan received a memo questioning why the beacons, believed to be historic vestiges, still needed charting, and had to explain that they were still, in fact, in use. The chart was subsequently revised to restore the beacons, though Rogan had to supply detailed information on positions, tower heights, and beacon signal codes “because they threw everything away.”

More recently, the MacDonald Pass beacon was added to the National Register of Historic Places, an honor that required even more extensive research.

“In our file, all I can find is just a surplus property transfer form,” Rogan said. Montana DOT historian John Axline pulled newspaper clippings from the 1930s, including one from 1935 that reported the MacDonald Pass beacon’s dedication. Rogan said additional Montana beacons may also be added to the register.

Montana alone maintains beacons that were installed across the country by the U.S. Postal Service and Commerce Department’s Bureau of Air Commerce starting in the 1920s, a network that once included 1,550 lighted towers marking 18,000 miles of airways. By the 1960s, the FAA started taking them down, many of Montana’s beacons among them.

“I enjoy the history of the whole (system), everything about that portion of it,” Rogan said. The beacons were part of the original National Airspace System, “the airways that eventually became the VOR airways… just all of it is pretty cool. It’s another thing that will be lost if a person doesn’t keep it up.” 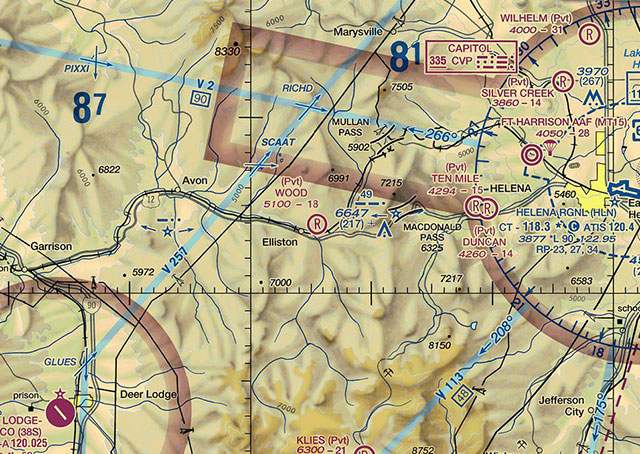