Get the app Get the app
Already a member? Please login below for an enhanced experience. Not a member? Join today
News & Media ‘Like you’re flying a Thunderbirds solo act’

A practice flight at Turf Soaring in Phoenix. 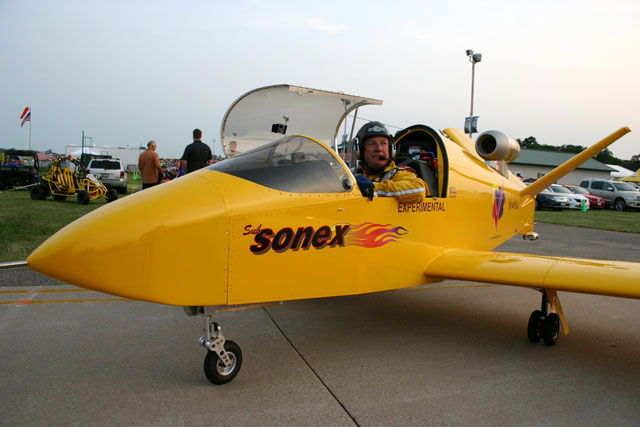 The PBS TJ-100 jet engine is so small that airshow performer Bob Carlton stores it in a 120-quart cooler and takes it into the hotel room when he’s traveling with his Super Salto jet sailplane. That 40-pound engine produces 250 pounds of thrust, however—and when mounted on the SubSonex JSX-2 kit aircraft, it produces speeds approaching 300 mph.

Carlton, who carved out a niche in the airshow circuit performing aerobatic routines in jet-powered gliders, debuted an aerobatic performance in the SubSonex personal jet at the Sun 'n Fun International Fly-In and Expo. Between his April 20 and 26 performances, he spoke to AOPA about the new routine and the single-seat microjet, which builders can buy as a kit for $130,000.

Carlton said he got involved with the SubSonex because he was the guy with the engine: He saw the prototype at the Sonex Aircraft booth at EAA AirVenture and recommended they switch to the PBS engine, which he used in his glider routine. He became chief test pilot for the experimental amateur-built kit aircraft and has performed low passes in front of the EAA AirVenture crowd in the microjet, but the Sun 'n Fun demonstrations represented the first full-length, fully aerobatic performances in the SubSonex.

In developing the SubSonex routine, Carlton said he started with his glider routine. There are more similarities than differences between the two aircraft, he said, although he did have to accommodate some of the microjet’s different handling characteristics. With an entry speed of 175 to 220 mph for many maneuvers, the SubSonex is much faster than the Super Salto; maneuvers that took him 500 feet away from the show line in the glider would take him about 1,500 feet away in the SubSonex. He cut those maneuvers, he said, but plans to take advantage of the jet’s 18-foot wingspan with lower-level maneuvers in future performances.

With a single seat, a stall speed of less than 60 mph in the landing configuration, and a design never-exceed speed of 298 mph, the airplane challenges one’s expectations of how a jet aircraft should look and act. Among the surprises in Carlton’s routine is the tailslide, normally unheard of in jets because the more common axial-flow jet engines are susceptible to compressor stalls; the TJ-100 uses a less susceptible centrifugal compressor. 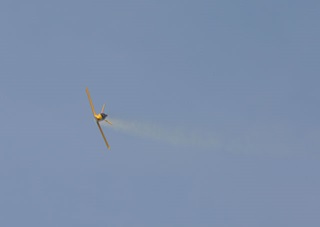 Flying the jet “just feels like something magic,” Carlton said, describing the exhilaration of pulling the nose up for takeoff and watching the ground disappear in a 160-mph climb. The cockpit sits low and forward of the wing, with the engine mounted behind it on the tail cone.

“It’s almost like there’s no airplane there, you’re just sitting in your little magic carpet,” he said.

Life on the edge

Carlton got his start in aviation when he bought a hang glider in the classifieds for $50 and taught himself to fly it at age 18, he said; it had been sitting in the sun for years, so his mother helped him patch the holes in it with her sewing machine. He learned to fly gliders, airplanes, and helicopters, and his jet sailplane routine was borne out of the inconvenience of arranging for or bringing a towplane and tow pilot with him to airshows. His experience flight testing three jet sailplanes helped prepare him for testing and flying the SubSonex.

The SubSonex Carlton flew in the airshows is stock, differing from the seven kits that have been shipped to customers only in the addition of a smoke system. As the test pilot for the aircraft, Carlton praised its honest handling and ease of building; the jet engine could bring reliable, safer, simpler technology into general aviation, he added, but the FAA still thinks “fast, heavy, dangerous” when you say the word “jet.”

Yet airshow performers commonly push the envelope, and complying with the regulations while doing something new involves walking a fine line.

“When you live life on the edge, you have to know where the edge is,” he said of airshow performers’ detailed knowledge of the regulations. He recalled one time when he was flying a twin-engine jet aircraft at a low level, inverted, with pyrotechnics on the wingtips, inside a presidential TFR, with no current medical or multiengine rating, and it was all legal: It was a glider, with permission to fly into the edge of the TFR for an airshow.

As Carlton plans for a busy airshow season, he'll also feel out the edges of the SubSonex's performance envelope with further flight testing. He's seen 282 mph in the single-seat, experimental jet, but still needs to do flutter testing to verify the design VNE of 298 mph. It's got a range of about 400 miles, he said, although the flying he performed at Sun 'n Fun was a far cry from straight-and-level.

“I’ve got to say, flying this little jet, every time you take off you feel like you’re flying a Thunderbirds solo act,” he said.