Get the app Get the app
AOPA Members DO more LEARN more SAVE more - Get MORE out of being a pilot - CLICK HERE
News & Media Letters: From our July 2015 issue

Dogfight: Over the lake or not?

Our debates always generate a lot of mail from readers, and the discussion aboutthe best way to fly to OSH didn’t disappoint. 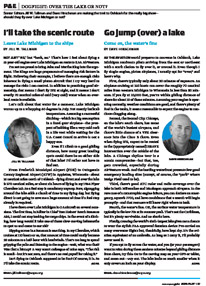 Our debates always generate a lot of mail from readers, and the discussion aboutthe best way to fly to OSH didn’t disappoint.

I have to agree with Jill W. Tallman (“Take the Scenic Route”). Having grown up in Wilmette, I have been in the lake for 10 minutes, five miles from shore, on a 90-degree day in July and found myself chilled to the bone. Having talked to one of the Coast Guard helicopter pilots about the challenges of finding someone alive out in the middle of the lake, there is no way you could ever convince me to fly a single-engine airplane across the lake. Around the south end for me, thank you. Besides, the view along the lakefront is a magnificent bit of frosting for the cake of flying to and from Oshkosh.

As for her “opponent’s” (Dave Hirschman) remark about reducing the size of the lake in ForeFlight (or whatever) and making it look smaller (“Go Jump Over a Lake”), think of how much smaller in scale you and your airplane just became.

My personal minimums for flights over Lake Michigan:1.  No flight across the lake at night, or under IFR flight conditions, or during freezing weather conditions.2.  File IFR and fly at 13,000 feet eastbound or 14,000 feet westbound, plus carry oxygen.3. Choose the shortest points across the lake to minimize time over water.4.  Lastly, have approved PFDs for each person on board.

I disagree with the comment “Assuming a successful ditching—which is a big assumption in a fixed-gear airplane.” I have not researched the statistics other than recollection of news articles, but in Hawaii there are numerous successful ditchings of fixed-gear airplanes, including at night. I would feel safe in saying that the vast majority of fixed-gear ditchings in Hawaii are successful. Even ferry aircraft that have cabins full of fuel tanks with limited egress capabilities usually ditch successfully. I would even go so far as to say that the percentage of successful ditchings is greater than that of crashes on land. Forced landings on land are usually successful, but many airplanes crash because there is no suitable forced landing location nearby. For 50 years I have told people that I would rather fly over the ocean than over places like Washington state, where trees can make forced landings very difficult. Having said that, ditching in 60-degree or colder water is not at all attractive. I grew up in Southern California, where the ocean temp is usually about 60 degrees, and I know that one does not want to spend many hours in that water.

So, next time you are flying over rough or heavily forested terrain, think about whether you would rather attempt a forced landing there—or in water.

I have flown to Oshkosh many times and I always fly over the lake. However, on one of those flights, flying a club Cessna 172 IFR at 8,000 feet, about halfway across I noticed that my oil pressure was dropping. My wife, who was acting as navigator, wanted to know what I kept looking at. I contacted ATC and advised them of my situation and was able to land safely under power with low oil pressure. What had gone wrong?  It turns out there was a valve cover leak which was not noted on the squawk sheet and had not been repaired because “the engine was due for its 2,000-hour TBO.”  I should have suspected there was a problem because the oil was fine when we had left Morristown but I had to add a quart when we landed for fuel at Youngstown. The moral of this story is that if you are planning to fly over water, it is not a bad idea to remove the cowling and check for leaks.

“One point both Jill and Dave missed is that in July’s heat, Lake Michigan is often a huge haze generator. I was one of those VFR pilots that thought it may be sporting to fly over the lake on the way to Oshkosh, but an IFR-rated friend of mine talked me out of it. On the way home, he took me over the lake, in the heat of the day, and I could not see a horizon—just a blue-gray haze all around me.”

You Can Fly Sweepstakes 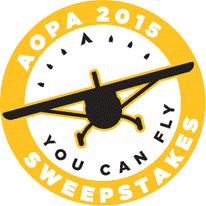 52s. Recently, because of costs of maintaining my airplane, questions of health and personal finances (I just passed age 86), it became necessary to part with my 152. I got my certificates in 1980 and have had my airplane with me since I brought it back from Wichita with one hour on the engine.

It is with great sadness that I parted with Four-Eight-Six-Eight Papa. Only knowing that AOPA purchased it as one of the first in the program, and that it will show up on ramps in its new colors to revitalize learning to fly, eases the pain of our separation.

Bruce Landsberg’s “Safety Pilot Landmark Accident: Trust But Verify” reminds me of an experience. A friend’s Cessna 210 came out of maintenance, which involved work on the elevator. That evening he flew and I was right seat. Everything worked. Next morning I loaded my whole family in the airplane. Upon takeoff I was nose high so I trimmed down. It took more and more strength to push the nose down. After an emergency landing we discovered the trim cables were crossed, left to right, up to down, under the copilot’s seat. My friend always used the autopilot for trim, which connected farther back, behind the mistaken crossover, than the trim wheel I used. Trim worked for him but not for me.

Tom Horne missed a very important piece on the non-precision approach (“On Instruments: The ‘Non’ in Nonprecision”).

He stated, “The strategy most often taught is to descend promptly to the MDA immediately after passing the FAF inbound.”

I do not teach this way and believe this can, and does, lead to CFIT accidents by descending at a high rate of descent close to the ground in IMC conditions.

I reference the Instrument Flying Handbook page 1 through 23 where it discusses the vertical descent angle (VDA). You should inform your readers that almost every nonprecision approach has a VDA from the FAF to the threshold crossing height on the profile view. This is often the same angle all the way from the IAF to the threshold crossing height. The pilot should review the VDA, reference the rate of descent table, and decide what rate of descent is appropriate for the approach. If the angle is consistent from the IAF to the missed approach point, a pilot can make adjustments between the IAF and the FAF for wind and have his required rate of descent well stabilized before the FAF.

The goal here is through proper planning and in-flight adjustment to have a stabilized rate of descent from the FAF to the runway threshold. One of the requirements (91.175) to descend below the MDA is that your airplane be “continuously in a position from which a descent to a landing on the intended runway can be made at a normal rate of descent using normal maneuvers.”

The “dive and drive,” as I’ve heard it called, fails this rule every time. Let’s get the word out and have safe and stabilized rates of descents for nonprecision as well as precision approaches.

With regard to the June 2015 “On Instruments” article on transitioning from head-down to head-up on Category I ILS approaches, pilots may indeed descend below 100 feet above the touchdown zone with the approach lights, red terminating bars, and side row bars visible. Category II ILS requirements are separate, and addressed in FAR parts 91.189 and 91.191.

What do you like best about EAA’s AirVenture in Oshkosh?

Pilot camaraderie 5.5%
Airplanes on display 15%
Educational seminars 3.25%
New pilot tools and aircraft announcements 3.5%
Airshow 4%
More than one of the above 69%