Get the app Get the app
Already a member? Please login below for an enhanced experience. Not a member? Join today
News & Media Pilot Briefing: Fly-Ins 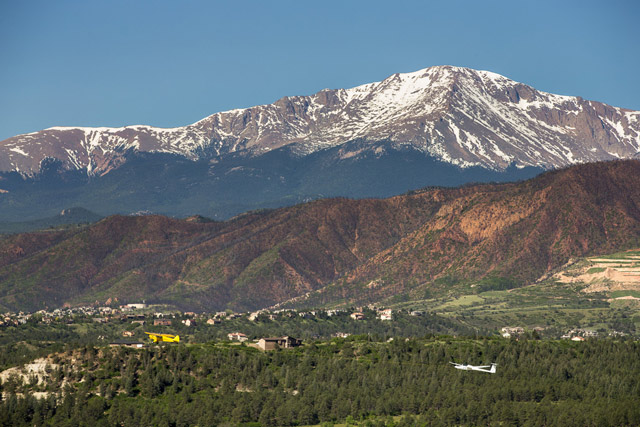 With Peterson Air Force Base at the north end of the field, a commercial terminal to the south, and general aviation facilities to the west, Colorado Springs Municipal Airport (COS) is like three airports in one. Lockheed C–130s mix with airliners, trainers, and business jets at the more than 7,000-acre field, which started in 1926 as gravel runways on an area of grassland outside of the city. That field has become an expansive Class C airport whose longest runway stretches 13,501 feet—and on September 26, the airport community will welcome AOPA members to the association’s second-to-last AOPA Fly-In of 2015.

Whether they arrive by airline or GA, visitors to Colorado Springs can see breathtaking views of Pikes Peak and the Front Range to the west—and many outdoor activities in a city whose dry, sunny climate earned its early reputation as a health resort. AOPA Airport Support Network volunteer Stephen Ducoff said Colorado Springs has much to offer visiting pilots: the Air Force Academy, the National Museum of World War II Aviation, Garden of the Gods, and the five-star Broadmoor hotel.

“We’ve got a lot of terrific opportunities for people to recreate,” said Ducoff. Attendees will be able to make a weekend of the trip by arriving early for a special Barnstormers Party sponsored by Jeppesen September 25, featuring the Recreational Aviation Foundation’s potato bake, barbecue, and live entertainment. Pilots also may reserve a spot to camp under their airplane’s wing.

The airport has gone through a renaissance, Ducoff said, and he’s eager to showcase the community’s enthusiasm for GA. “The community is really coming together behind this,” he said.

AOPA’s next Fly-In is September 26 at Colorado Springs Municipal Airport.

Eat lunch or dinner in a KC–97

By Sarah Deener
This Colorado Springs Airport restaurant is housed in a Boeing KC–97 Stratofreighter (below). Diners can enjoy great food in The Airplane Restaurant (bottom right). 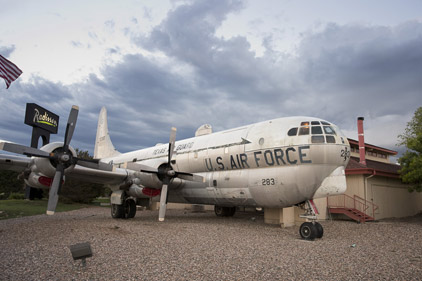 Outfitted in airline captain-style epaulettes, Steve Kanatzar breezed through the aisle of the giant Boeing KC–97 greeting customers. A couple with three small girls looked up from their meals as he passed.

“They just flew us back from Paris,” said the man as he gestured to the smiling young pilots of this flight in the main attraction of The Airplane Restaurant in Colorado Springs. The KC–97 intersects the walls of the aviation-themed restaurant’s main building, with wings and propellers protruding into the main dining area. Patrons looking for an in-flight dining experience (some imagination required) may eat lunch or dinner in the cabin of the KC–97 and make their way into the cockpit to snap photographs.

Kanatzar, a pilot, said he opened the restaurant 13 years ago after purchasing the tanker from the government and trucking it to Colorado Springs in eight tractor-trailers. The aircraft was built into the side of the restaurant building, located at the west side of Colorado Springs Municipal Airport. It still bears the markings of the U.S. Air Force from its previous life in the Texas Air Guard. 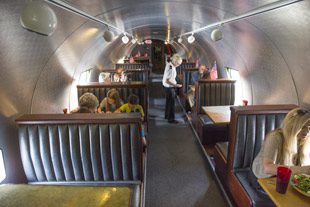 Inside the main dining area, Kanatzar recited the history of the many signed photographs on the walls and pointed out where astronaut Gene Cernan, the last man on the moon, once sat. The airplane’s last logbook page is framed on the wall, along with a photograph and the signatures of the people who flew it. Mannequins in uniform may cause you to do a double-take, and aviation memorabilia lines every wall.

From the décor to the menus, everything follows the aviation theme. (Lunch items include “Reuben von Crashed” and the “Piper Club.”) As a group of women got up from their meals to leave, Kanatzar gave them a standard airline sendoff: “Thank you for flying with us.”