Get the app Get the app
AOPA Members DO more LEARN more SAVE more - Get MORE out of being a pilot - CLICK HERE
News & Media Pilot Briefing: New Pilots

For the past five years, members of EAA Chapter 1083—based at Rowan County Airport in Salisbury, North Carolina—have shared their passion for aviation with young people, ages 13 through 18, during a weeklong Aviation Summer Camp: Exploring New Dimensions, or ASCEND. 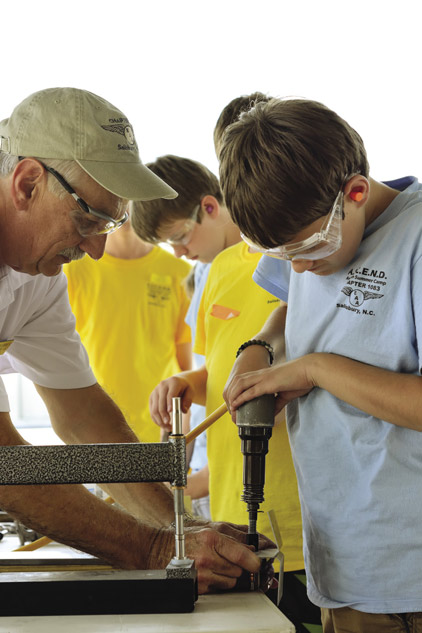 The camp is designed to immerse participants in all aspects of aviation, to help them become aware of the many opportunities available to them—whether they’re interested in aviation as a hobby or possibly a career, said Jack Neubacher, chapter president.

“They learn the parts of the airplane, how an airplane works,” he said. “They learn how to plan a flight, how to cover fabric, how to rivet.” This year campers took a field trip to Greensboro, North Carolina, where they visited facilities at Piedmont Triad International Airport and toured the control tower. “The week is topped off with Young Eagles flights on Saturday morning.”

And the program has been effective, he said. A number of former campers are in college aviation programs, working as A&P mechanics, or have become pilots.

“This is what got me started,” said Jamie Helander, 19, of Greensboro, North Carolina. A camper in 2012, she drives more than an hour each way to volunteer as the lead intern, essentially head counselor. “I really love this,” she said. Now a student at Guilford Technical Community College, she’s working on a degree in career pilot and aviation management, and just started flight training.

Lucas Carter, a high school sophomore from Garner, North Carolina, participated in this year’s camp, which was June 22 to 27. “I’ve had a small interest in aviation for a while, and I wanted to find out if I liked it more,” he said. “And I have.” Carter said his growing interest could lead to an aviation career. “I know I want to do it recreationally, at least.”

Camper Ashley Lynn of Lexington, North Carolina—who is going into the eighth grade—at first was terrified of flying, until she took a Young Eagles flight. “And I really liked it,” said Lynn, who has enjoyed learning about other aspects of aviation—how aircraft are built, for example, and how the flight instruments work. “When I came here, I didn’t really know much about the inside of the plane.”

Ezra Wells, a high school senior in Salisbury, attended ASCEND for the first time last year, and returned as an intern. “I didn’t have a career interest in aviation—but I didn’t really have a plan,” he said. “I like to work with my hands.” He currently intends to earn an A&P certificate after high school, then pursue a private pilot certificate. “After my first flight, I realized this is something I want to spend more time doing.”

The camp was the brainchild of Jana Brown, a teacher for 24 years. She wanted an opportunity for kids to keep learning during the summer. “I thought, what can we do in aviation to get these kids involved?” She and Tammy Koontz, also a career teacher, worked to adopt AOPA’s PATH curriculum, which forms the camp’s foundation. The program has grown from 11 campers in 2011 to 21 this year.

Campers each pay $150 to participate but the chapter will reimburse graduates for the cost of an introductory flight lesson, any time within the next year. “We didn’t want to charge them anything, but you have to put a price on it to show that it has value,” Brown said. Donations from individuals and organizations, plus grants, help to cover costs.

“The exposure to aviation will broaden their education,” said chapter member Billy Carter, the camp’s fabric covering instructor. “Not every young person has that.”