Get the app Get the app
AOPA will be closed July 4th, in observance of the Independence Day holiday. We will reopen at 8:30 am ET on Tuesday, July 5.
News & Media Pilot Briefing: AOPA 2015 You Can Fly Sweepstakes

Spins aren’t so tough, after all

Spins aren’t so tough, after all 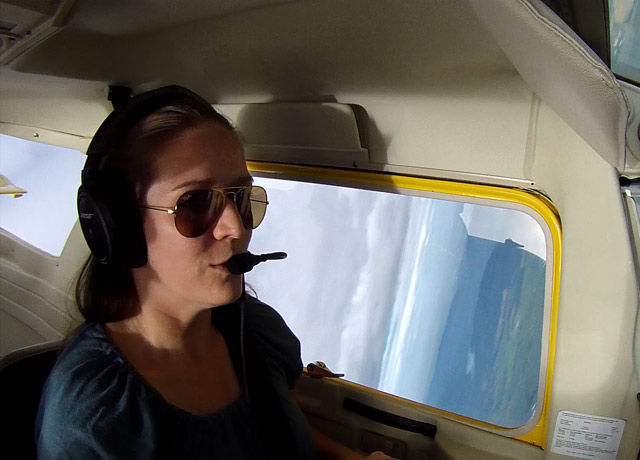 She wasn’t the least bit anxious when she took off in the bright yellow AOPA Reimagined Cessna trainer, or began the long, slow climb to the cool air above the summer haze. But as she prepared to initiate her first spin, AOPA colleague Sarah Deener cracked a wry smile.

That’s a perfectly natural and understandable reaction to any new flying experience— especially spins, aviation’s schoolyard bully. They have a fearsome reputation, and spins can be intimidating and disorienting. But Deener was about to take them on in a trainer well suited to the task.

At 4,000 feet agl, she applied carburetor heat, reduced the power to idle, raised the nose, and when the stall warning horn sounded, she stepped hard on the left rudder and held it fully down. As the airplane began a graceful autorotation and the nose dropped sharply, she counted each half turn as the verdant western Maryland countryside filled the windshield.

“Half, one, half, two,” she said out loud in a steady cadence.

But as the rate of rotation accelerated, the outside world became a blur and she fell behind in her count.

As soon as Deener applied opposite rudder, the spin rotation stopped, and the airplane accelerated quickly in a 60-degree dive. She raised the nose, applied full power, returned the carb heat to the cold position, and started regaining some of the 1,200 feet lost during the three-and-a-half-turn spin and recovery.

Deener is an instrument-rated private pilot who plans to become a flight instructor, and this spin flight was a hands-on experience meant to solidify aerodynamic concepts that all CFIs are required to learn. During a one-hour flight, she performed incipient and fully developed spins left and right using the standard recovery method: idle power, ailerons neutral, opposite rudder, and forward elevator.

“On the first spin, I was able to talk through the beginning steps,” she said after the flight. “Even as the spin starts, things seem to be happening sort of slowly. But as the spin rotation speeds up, it’s hard to process all the things that are going on, let alone vocalize them.

Keeping the diminutive trainer in a spin required holding full pro-spin control inputs. Simply relaxing full back stick or rudder pressure would result in the airplane’s starting to recover by itself. Cessna 150s and 152s have been highly successful spin trainers, and generations of United States instructors gained this valuable experience and potentially life-saving skills in them.

Deener said the primary benefit of performing spins, for her, is that she’ll recognize the approach to a stall (and yaw) well before it becomes critical.

“That spark of recognition will come much sooner,” she said. “I’m confident I’ll react appropriately.”

Deener characterizes herself as an analytical pilot and wants to know the theoretical underpinnings behind everything that takes place in the airplane. When she was a student, she’d ask her dad—an aerospace engineer and former U.S. Navy instructor pilot—to draw vector diagrams to help her understand concepts such as P-factor.

“I like to thoroughly understand the concepts on the ground before I see them in the air,” she said. “I think I had a good conceptual understanding of spins before this flight. But I’m definitely more comfortable with them now.

“I’ll always have a healthy respect for spins,” she said. “But they aren’t some big, scary bogeyman. They’re more of a known quantity.”