Get the app Get the app
Already a member? Please login below for an enhanced experience. Not a member? Join today
News & Media P&E: Avionics

Bringing a legacy Skyhawk into the twenty-first century

Bringing a legacy Skyhawk into the twenty-first century 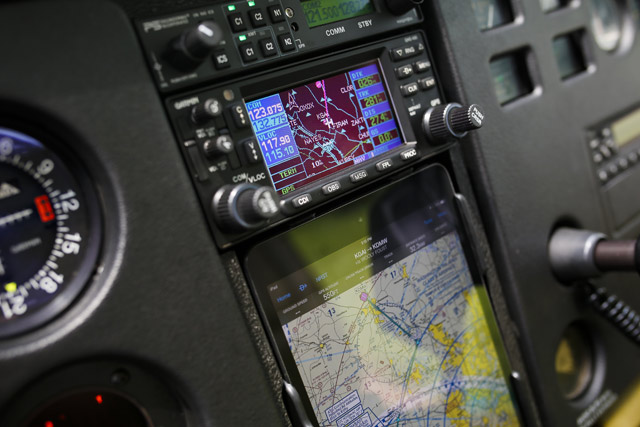 Since my father’s death in 1990, my brothers and I have co-owned the Cessna 172M in which we all learned to fly. Never ones to sell or throw anything out, we’ve clung to the 172 over the past 25 years, using it sporadically as a ride-hopper, trainer, and occasional traveling machine.

Recently, however, a few members of our family’s next generation have taken interest in flying. One earned his private in the airplane and another has soloed. But to adequately train in today’s navigation systems, the old Skyhawk’s avionics needed an update. Like other owners of legacy airplanes, we had a genuine fear of spending more than half the value of the airplane on avionics. It just didn’t seem worth it. This sentiment is shared by many other owners of 40-year-old airframes.

Some recent events at our home airport, however, basically forced us to take action. The NDB approach at the airport was decommissioned and the VOR approach was notamed out of service, thanks to construction of a building near the end of the runway. Without an approach-approved GPS, we couldn’t get into our home airport in anything less than VFR conditions. It also made flight instruction difficult when the home airport has no usable approaches anymore.

So how does one go about doing an avionics upgrade without breaking the bank? Be bold and go old was our strategy. Garmin still supports its GNS 430 series of GPS/navcoms, which date back to the late 1990s. These capable and reliable units are still factory upgradeable to WAAS capability for about $3,400, a not insignificant amount of money but still less than buying new gear. We scoured the market and found a used GNS430 and had that unit sent in for a “W” upgrade. With the used 430, WAAS upgrade, and a GI 106 course deviation indicator, we already were in for $9,000.

Given our historically infrequent use of the Skyhawk in low IMC weather, we decided against getting the ubiquitous second nav/com that many consider standard. Navigating via VOR is quite rare these days, so why carry two navs? Besides, most of the airports that we frequent aren’t served by an ILS, since those airports typically have more traffic, high fees, and high fuel prices. The addition of the 430W opened us up to thousands of RNAV approaches, many with LPV capability.

But a second com is still very much a requirement for any IFR-capable airplane, and that’s when we discovered a unique combination audio panel/com radio made by PS Engineering that seemed tailor-made for our needs. Any time a mid-1970s Cessna needs avionics, it likely will require replacing the original’s remote-mounted audio panel, since it is not compatible with most modern avionics.

PS Engineering’s PAR 200A satisfied our requirement for a new audio panel and a second com radio, leaving a huge area in the stack to mount a portable iPad Mini for display of charts, ADS-B traffic and weather, manuals, and a weight and balance app. In addition, we could ditch our portable intercom setup for an installed four-place intercom with the multiple music inputs and muting functions that PS Engineering is known for. We already had a Garmin GTX 327 transponder that moved to the right side of the panel, where the original ADF lived.

This svelte avionics suite dropped 25 pounds from the Skyhawk’s empty weight, a significant gain in an airplane of this class. With parts and labor, the panel/avionics refurb amounted to about $15,000—or nearly half the value of the airplane before the project was started.

But what’s a batch of fancy new avionics look like when surrounded by old, cracked plastic panel overlays? After many years, our overlays have become brittle and unsightly, and all of those remove-and-replace cycles over 40 years had brought ours to the point of no return. Besides, with the elimination of so many big radios and indicators, our overlays would have been filled with unsightly patches. While it would have been nice to replace the entire instrument panel with a flat metal replacement, it was beyond a practical budget to go that far with a labor-intensive redo of the entire instrument panel, despite its practicality and attractiveness.

We ordered replacement panel overlays from Vantage Plane Plastics for $300 in black, rather than the original Cessna cream (now yellowed) color. The new overlays fit well since our 172 has all of its original flight instruments and engine gauges. The overlays can be ordered with cutouts modeled after your specific model year.

One disappointment was that the new overlays do not come with a slot to allow removal of the pilot’s side overlay without removing the yoke, as the original did. You could create a slot like the original, but that would risk damaging the new plastic. In the end, we simply decided removing the yokes for instrument replacement would be easier and less intrusive.

We worked closely with local avionics tech Dave Wojnarowski at GAI Aircraft Services at the Montgomery County Airpark in Gaithersburg, Maryland. He patiently worked with us to create our dream panel, which involved moving some lights, switches, and an engine monitor to a better location in the panel. Now, the standard-Cessna high-voltage light and alert light for the Electronics International UBG-16 engine monitor are in a more prominent location atop the avionics stack, rather than poking through our new plastic overlays.

So far, the setup has been a massive leap in technology for our 172, inspiring confidence in communication and navigation accuracy compared to our old avionics. Flying an LPV approach has been a most enjoyable experience, especially when compared to the bad old days of dive-and-drive approaches. Being able to listen to tunes while flying has also been a nice addition, as is the ability to isolate crew and passengers on separate intercom circuits. In fact, with all the panel wizardry we have now, perhaps the current generation is going to have far too easy a time with their flight training.